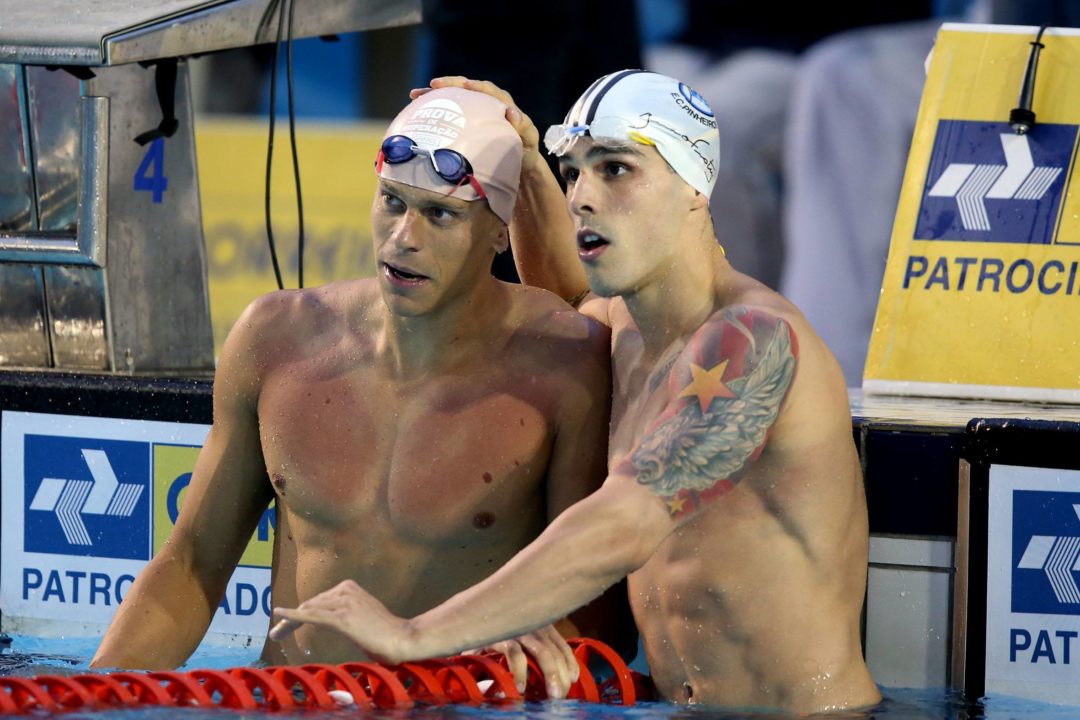 However, now Bruno Fratus, one of Cielo’s former understudies, is saying that his records will fall before the start of the 2021 Olympics. In an interview with the Brazilian site Globo Esporte, when asked about what it would take to medal at the 2021 Olympics, Fratus stated that “It will take a swim below 21 seconds to think of something.” This would be an extremely tough feat, given that only Cielo and Frédérick Bousquet of France have broken the 21-second barrier.

He also said he felt that the World Records will be gone before the Tokyo Olympics.

Fratus and Cielo’s careers share an interesting history. For a long period of time, they competed alongside each other, including an Olympic berth together in 2012 where Cielo out-touched Fratus for bronze in the 50 freestyle. Since then, Fratus has outperformed his world-record holding counterpart, securing silver medals at both the 2017 and 2019 World Championships in the 50 free, the former with a time of 21.27 that makes him the 10th best performer of all-time. Additionally, he put up his 60th sub-22 50 freestyle at the Mare Nostrum Monaco in 2015 to surpass Cielo for the most sub-22 swims all-time.

Cielo on the other hand, has faced many injuries and setbacks in recent years. After the 2012 Olympics he had to get surgery on both knees and pulled out of a majority of his races at the 2015 World Championships due to a shoulder injury. Although Cielo failed to make the 2016 Olympic team for Brazil, he bounced back to secure an 8th place finish in the 50 freestyle at the 2017 World Championships. Since then, he has remained active, but has stated that he is uncertain of his future in the sport.

Fratus too has dealt with a shoulder injury, undergoing surgery in September of 2018. He bounced back to win silver in the 50 free at the 2019 World Championships.

Going into the 2021 Olympics, Fratus is amongst the medal favorites, including the aforementioned Dressel, who won the World Championship titles in 2017 and 2019, in addition to recently breaking Florent Manaudou’s short course 50m free world record. Additional competitors include Ben Proud of Great Britain, Vladimir Morozov of Russia, and Kristian Gkolomeev of Greece.

I have a lot of doubt in this.

Caeleb Dressel, US Trials. The man is training through the quarantine.

what would his 8th gold be? I can only picture him winning 3 individual and 4 relay golds max

youre dreaming with that 200 free

Dryland training or actually in the water?

He won’t swim his fastest at Trials, you can bet on that. If he’s actually trying to make the 800 free relay, he’ll probably be less speedy and better up to the 200. He’s got so much cushion to make the team in his main three events, he can afford it.

Depends on how fast Held and Rooney are. He can’t be safe with 47 mid.

u are forgetting Farris & Apple

Don’t think it’ll take faster than a 21.3 to win bronze in the Olympic final… but yes, in the next year or two those records will fall.

But before the start of the Olympics?

Olympics 50 is almost always slower than the best time that cycle or even year. Too much time behind the block drama. They keep them out there forever before the start.

hahaha, sharp and to the point.