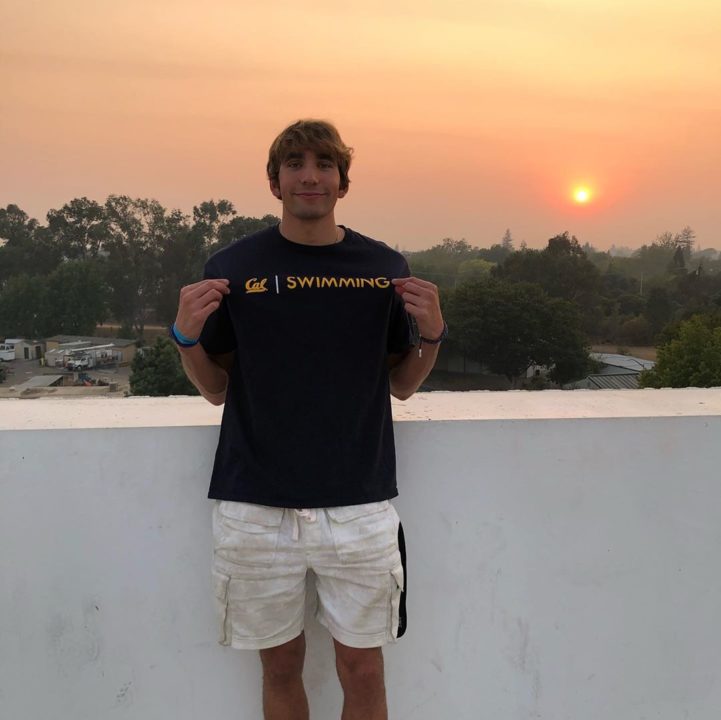 After originally committing to Indiana last November, Sean Swift has chosen to stay closer to home and become a Cal Golden Bear instead.

After originally committing to Indiana last fall, high school senior Sean Swift has opted to change his verbal commitment and will instead head to Cal in the class of 2021.

According to his mother, Jennifer Swift, Swift decided that he wanted to stay closer to home and train outside year-round in California. Sean Swift attends Rio Americano High School in Sacramento, California and trains with the Sierra Marlins Swim Team.

In making his announcement, Swift thanked both the Indiana coaching staff for “all the support” they gave him throughout the process and “the opportunity to swim at such a historic program,” as well as the Cal staff for offering him a spot in their program.

With careful consideration, I have made the decision to stay closer to home & withdraw my previous verbal commitment from Indiana University. I am very excited to announce that I will be continuing my academic & swimming career at the University of California Berkeley!! I would like to thank coach Looze & the Indiana staff for all the support they have given me throughout the recruiting process & the opportunity to swim at such a historic program. I would also like to thank coach Durden & coach Kreitler for offering me a spot in their program. Couldn’t be more excited to be apart of the Berkeley family. Go bears🐻🟡🔵

Swift’s original commitment to Indiana came fairly early in the recruiting process, in November of 2019. In spite of having his high school championships canceled in the spring because of the coronavirus outbreak, he was able to go best times in his 4 best events at February’s Carlsbad Sectionals Championships, in spite of what his mom says was just one day of rest.

Time Drops from November 2019 to Present

In making the change, he’s decommitting from a program with one of the best breaststroke legacies in the country at Indiana. Among the swimmers that the Hoosiers have churned out in the last few years include NCAA Champion and American Record holder Ian Finnerty, Olympic Champion and World Record holder Lilly King, and individual Olympic bronze medalist Cody Miller.

Last season, both programs had breaststrokers qualified for the NCAA Championships, which were ultimately canceled because of the burgeoning coronavirus pandemic.

Cal boasted then-sophomore Reece Whitley, who was seeded 2nd in the 100 breast and 1st in the 200 breast for the NCAA Championships. Indiana was sending sprint specialist Zane Backes, who was one spot behind Whitley in the 100 breaststroke as the 3rd seed.

Indiana had several IMers qualify for the NCAA Championships as well, including the 11th seed in the 200 IM Mohamed Hassan.

In short, both programs have proven capable of developing swimmers with Swift’s specialty, but with the move, he’ll now be about a 90 minute drive from home rather than a 6 hour flight from home.

He joins a strong class of 2021 for the defending NCAA Champion Cal Bears. Also committed on that list are:

Another day, another Hoosier decommit or transfer….

Hey where can I get one of these nice Cal Swimming shirts on line?

Dude heard Guerra is an IU fanboy and that was enough of a shove.

Welcome to the Team, Sean! We are thrilled to have you here in Berkeley. Best of luck with your studies and swimming career.