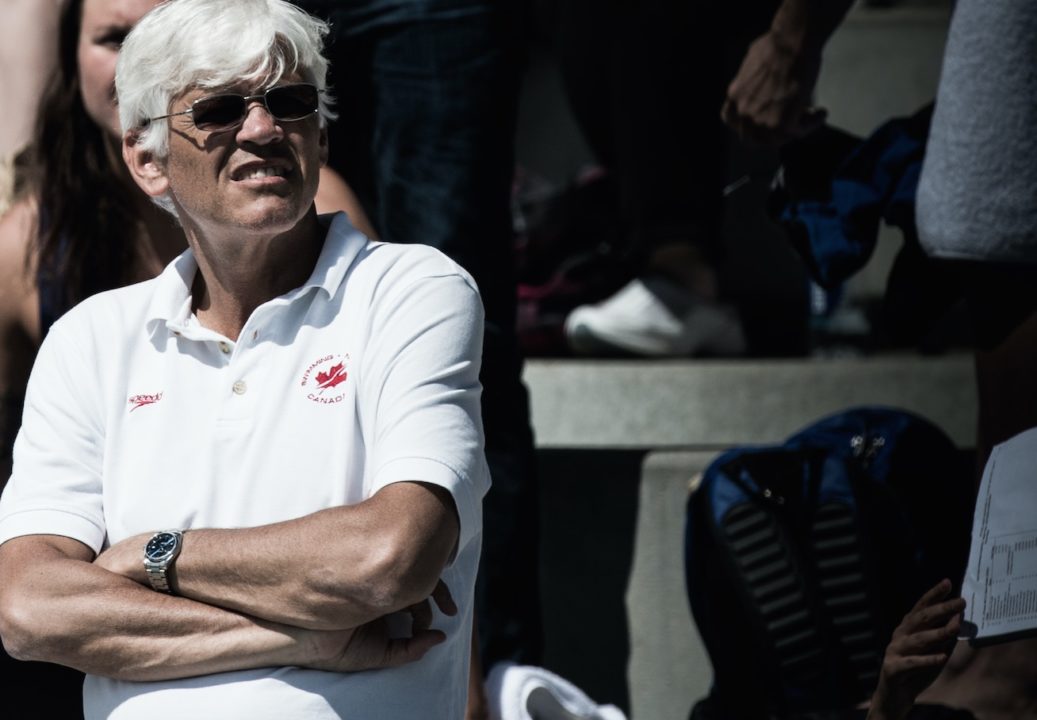 The legendary breaststroke coach shares his insights on where the stroke has come and what the future holds. Archive photo via Mike Lewis/Ola Vista Photography

The Aggie Swim Camp is known as a premiere technique-based camp where our philosophy is “INDIVIDUAL ATTENTION”.

With the world shutting down, we’re reaching into our archives and pulling some of our favorite stories from the SwimSwam print edition to share online. If you’d like to read more of this kind of story, you can subscribe to get a print (and digital) version of SwimSwam Magazine here. This story was originally published in the 2019 Spring edition of SwimSwam Magazine.

In many ways, Jozsef Nagy is considered the father of the modern-day breaststroke. A world-class breaststroker himself in the 1970s, Nagy moved into the coaching realm and guided a host of elite breaststrokers from various nations — among them American Mike Barrowman, Spain’s Sergio Lopez Miro, and Canadian Annamay Pierse.

Nagy is widely credited with inventing what’s known as the “wave” breaststroke: taking a stroke that was for many years flat and adding an undulating component that revolutionized it.

As breaststroke continues to evolve, we caught up with Coach Nagy to talk about the future of the stroke.

Q: More so than the other strokes, breaststroke has a lot of stylistic variation from swimmer to swimmer. But do you feel there is a common element or elements that every great breaststroker does well?

A: Just like in anything else, in breaststroke most swimmers want to copy the best — the Olympic champion, the world-record holder — in training preparation as well as in technique. Obviously this can be done only partially, due to the different physical attributes of the swimmers that can be seen with the naked eye. These differences result in different technical variations.

At the same time, the best breaststrokers of a given period of time mostly use very similar technical solutions. Ever since Mike Barrowman validated the wave breaststroke in the late ‘80s with his world records, the breaststrokers swim higher in the water. Their swimming is more fluid due to not waiting and dropping deeper after the pull. Instead, with an active upper-body move, they build a bridge between the dead point before the kick. Thus, during the hand recovery their backs stay above the water.

Q: You’ve written for SwimSwam before on the “vertical line” as a tool for analyzing speed changes within a single breaststroke stroke. What do you think are the major factors that cause these speed changes? And how do you go about addressing them?

The “vertical line” was my idea, about 25 years ago. I don’t know of a simpler way to make a swimmer address the unwanted speed changes in his or her strokes. This — the vertical line — is not widely known because the [speed-analyzing computer] program is not easily available on the market, if at all.

The fact is that after the pull and right before the kick there is a dead point in breaststroke. Of course, logic dictates that the kick should follow the pull immediately, but it is not that simple. In 1977, watching the best breaststrokers, I did not understand why the swimmers did not do what was for me an obvious move. They pulled with the pull and then, in the worst possible body position, they pulled up their legs and kicked back — while they slowed down and sunk. At this moment I had the idea that resulted in the wave breaststroke.

The point is that after the pull and before the kick with an active hand-arm-shoulder-head-upper-body move, the swimmer tries to create a bridge (lunging forward) between the pull and the kick, thus not losing speed or body height.

The speed of the consecutive moves within a stroke must not be significantly faster or slower. It is very important that the moves follow each other in a harmonious way.

Q: Adam Peaty is swimming historically fast in the sprint breaststrokes right now. What do you think he’s doing so much better than the rest of the world?

It is without question that he is doing the sprint breaststroke better than anybody else in the world. Obviously the most eye-catching detail is that he is swimming with a higher stroke frequency all the way in the 100 meters. Other breaststrokers could also swim that higher frequency, but not all the way! Adam Peaty is the only one who can keep this stroke frequency all the way through the 100. One can tell that he is working hard to be able to do that. He is strong. His technique is nice and precise. His pull and kick is solid.

If we look at his swimming a bit closer, we can see one more thing that he is doing better than the other top male breaststrokers: In preparation for his kick, he pulls his knees up underneath his stomach a lot less, hence creating a lot smaller resistance than others. This is a very important positive fact about his swimming.

In the past few years he has been winning confidently in each of his races, but he has made it clear that he wants to be the first to swim below 57 seconds.

Without criticizing Adam Peaty and his coach’s fantastic results, we must see that he wins his races after the first 15 meters and after the 12 meters coming out of the turns. His start, his turns, or his underwater strokes are not better than the other swimmers. I am absolutely certain that there is a potential of a few tenths of a second in these details technique-wise. I don’t think that with his strength he can’t turn faster or that he can’t do faster underwater pulls.

Q: You mention Peaty’s stroke rate. Do you think that high-tempo approach is the future of the stroke? And if swimmers start to incorporate a really high tempo like Peaty, what mistakes do they need to be careful of as they implement it?

If a swimmer feels that he or she is capable both physically and technically to do a good stroke, then the only goal left is to do this persistently and as fast as possible. It sounds simple, but in practice it is very hard.

First of all, the high stroke frequency can be a killer. The swimmers should speed up the strokes as much as he or she is able to keep during the 50, 100, or 200.

Second, the tiredness resulting from the high stroke frequency will most probably cause technical faults: the pull, the kick, and the whole body position and streamline during the stroke would become less precise.

Q: We’re seeing a little more distance specialization among the world’s top breaststrokers right now — the top sprinters like Peaty and Lilly King are staying more confined to the 50 and 100, while more distance-oriented swimmers like Josh Prenot or Ippei Watanabe are more pigeonholed into the 200. Do you think this is a trend, or just coincidence?

In our sport, swimming, there are rarely accidents. In breaststroke, there has been no swimmer yet who has been the best in the world in the 50, the 100, and the 200 meters at the same time.

It’s no accident that Adam Peaty and Lilly King mainly swim the 50 and 100. Ippei Watanabe and Josh Prenot are not fast enough to win in the 50 and 100. Adam Peaty is the best in the world in the 100; there are no threats here. But in the 200 there are four to five swimmers who can win anytime.

It’s quite interesting that during the past decades the 100-meter breaststroke has become several seconds faster than the 200, while in theory the 200 should have been improved by twice as many seconds. Surprisingly, this deterioration cannot be seen in the women’s breaststroke events.

Had the 200 breaststroke become proportionally faster, like the 100, the world record would be 2:01.78. Is that an unbelievably good time? For now it is, but not better than the 57.10 in the 100. Why is the 200 so much behind the 100? I would rather not criticize the men’s 200 breaststroke swimmers and their coaches. Let’s just say that the 100 has an outstanding personality right now.

Q: When you train breaststrokers, do you place more emphasis on kicking than you would with athletes in other strokes, given that the power of breaststroke is so kick-driven?

No doubt that the breaststroke had previously been based on the kick. But that has been changing since a long time ago.

Already in the ‘80s, the 100 breaststroke swimmers had been moving forward based on the kick and pull roughly 50-50. Older coaches can tell that the kick sets of today’s best breaststrokers are barely faster than 30 years ago. At the same time, breaststroke pulls are getting better and faster, and this tendency is there even in the present days.

It is obvious that breaststroke will be swum in a different way in a couple of decades than it is today. But to present a new technique, special, gifted swimmers and coaches are needed. The coaches should not wait for this special swimmer with a special and different technical solution — like Fosbury with the flop style in high-jumping — because these kinds of athletes show up very, very rarely.

I was very happy to be part of revolutionizing breaststroke in the ‘80s and ‘90s, and that is naturally still taking place today. For me, it was like a fantastic fashion show. I designed the dress, we made it with my swimmers, and they shone in it on the runways.

how do you get in touch with Mr Nagy?

I think he’s saying that the stroke hasn’t been dominated by the same person across the distances, like Peaty has in the 100 now. I think SMITH-KING-DAHLIA-MANUEL has a good counter example with Soni though. She was pretty untouchable for a window there.