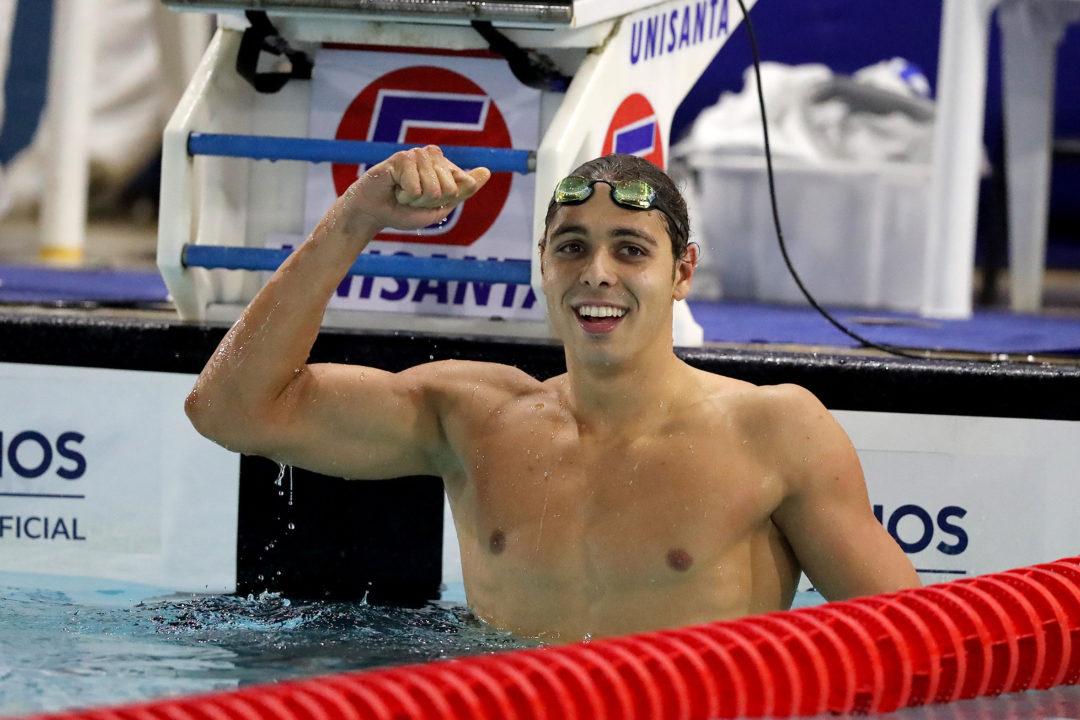 Vini Lanza won 3 events at the Jose Finkel Trophy, but has pulled out of the 2018 World Short Course Championships. Archive photo via Satiro Sodre/SS Press

In a letter sent out this week by the Brazilian swimming federation (CBDA), two names were removed from the initial list of 20 first announced for the 2018 World Short Course Swimming Championships in December. The meet is scheduled from December 11th-16th in Hangzhou, China.

Vini Lanza and Guilherme Costa are out of the selection, and they’ll be replaced with Diego Prado and Leonardo de Deus. The decision was formally made through the  National Technical Council of High Performance Swimming.

Lanza won 3 of the 5 individual races he swam at Jose Finkel, and was 2nd in the other 2:

The Short Course World Championships will come in the middle of the NCAA season, where Lanza will be racing his final year with the Indiana Hoosiers. He won 6 All-America honors (of a possible 7) at NCAAs last year, including 3rd-place finishes in the 100 and 200 butterflies.

Costa won 2 of his 3 individual races at Jose Finkel:

The roster was initially selected based on athletes who hit a set of very-tough qualifying standards at the Jose Finkle Trophy in August (in many cases, standards were faster than the South American Record). After 11 of the mandated 20-swimmer roster were awarded thusly, the next 9 spots went to swimmers invited based on their World Ranking. Lanza qualified via standard, while Costa’s selection was based on his world ranking in the 1500 free.

Brazil’s updated roster is below:

Does anyone know the politics (which there are many) for this decision by the Brazilian federation? Is it that they were training in the US?

It wasn’t a decision taken by the brazilian federation

Hope it was the athletes choice?

NCAA season means more to collegiate swimmers than scm. Of course it was his choice. Lanza can win both fly events at NCAAs this year. He needs to be focused on that.

The WCs are in December. Why can’t he taper for that meet and make NCAA cuts then? Is it too late in the cycle, perhaps?

It is lanza last season.. also he had his main meet this year on Pan Pac.. so.. he will probably go all out on NCAA then full force to World and Pan Am

Vini is all hoosier in season GO IU.

A great decision on Vini’s part. He will ALWAYS cherish the days with the IU team. Well done!!!