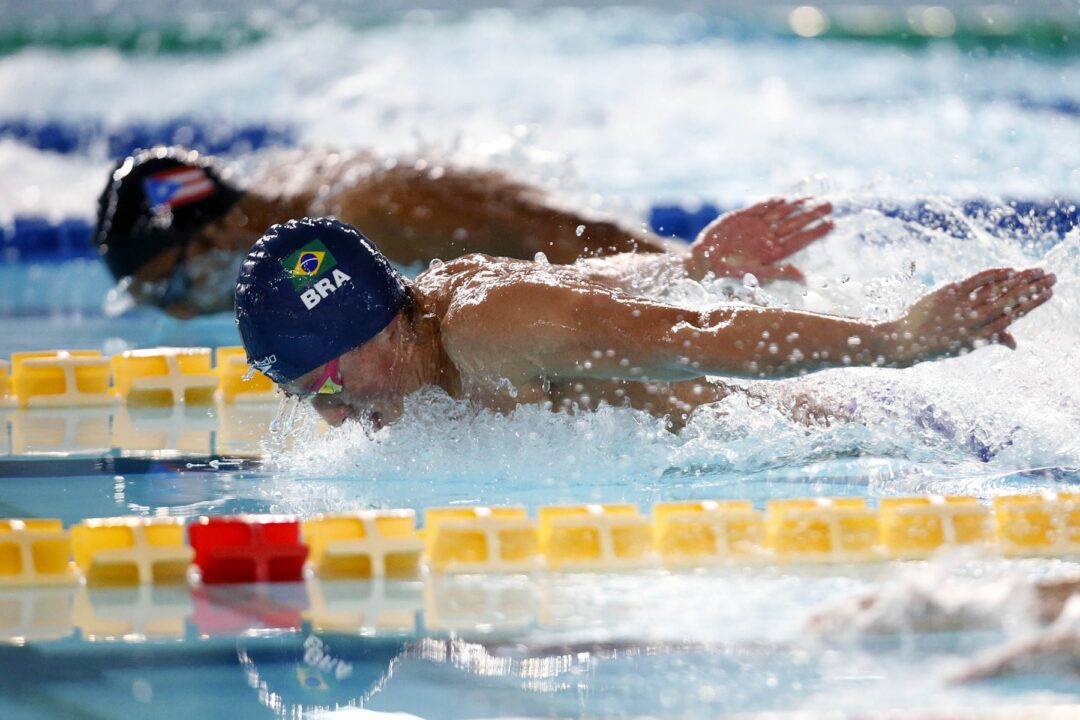 Gustavo Saldo won the 200 fly on day 4 as Brazil lost the South American Championships for the first time in over 50 years. Current photo via Satiro Sodre/SS Press

Team Illinois Defends Title at 2022 Duel in the Pool

Team Illinois defended its Duel in the Pool title from 2019 with a victory over Gulf Swimming and Team Indiana at the University of Houston last weekend.

Canadian Kylie Masse was the lone swimmer to produce a sub-1:00 performance in the women’s 100 back, qualifying in 59.43.

The final day of the 2021 South American Swimming Championships saw history made, with Argentina handing Brazil its first loss in team scoring since 1966.

Argentina finished with 35 total medals and 439 points, 3 medals and 19.66 points more than runner-up Brazil. Brazil still kept their medals table streak alive – at least by traditional gold-silver-bronze sort, Brazil topped that table with 10 golds as compared to 8 to Argentina.

While the entire Argentina team was strong, it was the women’s side that shone, with multiple winning more than one event and adding podium finishes in others. Both Delfina Pignatiello and Julia Sebastian won multiple events throughout the week.

Argentinian women’s dominance is nothing new at the South American Championships. In 2018, the women accounted for 29 of the 44 total medals won by the country.

Just as that’s said, the meet started with an upset of an Argentinian woman in the 200 fly. Mexico’s Maria Mata Coco beat out the defending champion in the event, Virginia Bardach of Argentina, Maria Mata Coco finished with the top time of 2:12.66 in the first race of the night. The 27-year-old Mexican finished ahead of 2021 200 free champion Rafaela Raurich (2:12.66) and 2018 200 fly champion Virginia Bardach (2:14.58).

Mexico (along with Puerto Rico) aren’t usual participants in these South American Championships and weren’t being included in team scoring, but did make an immediate impact on the event.

On the men’s side, the 2oo fly went to Brazil’s youth national record holder in the event, Gustavo Saldo. Saldo, who committed to swim for Louisville last summer but never appeared on their roster, finished with the only Olympic B qualifying time in the field with a time of 1:58.76.

In one of the strangest occurrences of the meet, three men tied for the top spot in the 50 free. Lucas Peixoto Martins (Brazil), Alberto Mestre Vivas (Venezuela), and Enzo Martines-Scarpe (Uruguay) all touched in 22.44 to share the event title. The trio was just .01 faster than the time that it took to win the event in 2018. They also beat out 2018 silver medalist Guido Buscaglia, who finished in 7th in 22.74.

After winning the 800 free on day one in nailbiting fashion, Delfina Pignatiello defended her title in the 400 free on the final day. Pignatiello held off Rafaela Raurich, who upset her in the 200 free, to finish in 4:15.00, over three seconds slower than her winning time from 2018. She was the 2019 Pan American gold medalist in the 400, 800, and 1500 freestyles.

Brazil also went with the Junior team (21 and under) for the first time.

Is the championship held every year?

Every other year-ish. It’s skipped a couple (1954) and has oscillated between even and odd numbered years that has pushed the gap to sometimes 1 and sometimes 3, but since 1966 it was held consistently every even numbered year until the pandemic delayed last year’s meet.

It’s usually a big Olympic qualifier, so I suspect it will go back to even numbered years.

By the other hand though… Brazilian next generation of sprinters seems to be showing up for business!