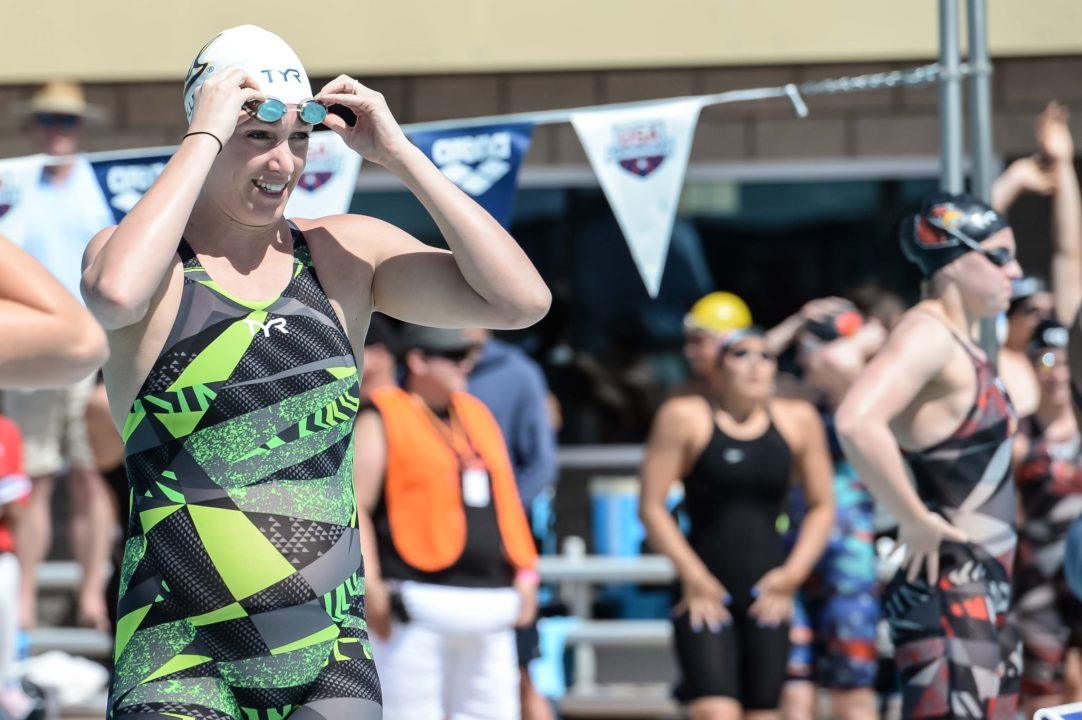 Vollmer's son, Arlen, will have a brother in a few months. Archive photo via Mike Lewis/Ola Vista Photography

Yesterday, 2012 Olympic champion Dana Vollmer tweeted that the color of her suit worn at today’s 50 free prelims would correspond with the sex of her child— she’s been pregnant for 26 weeks now. A green suit meant she was having a boy, and a pink meant girl, and today in Mesa Vollmer walked out to the blocks in the green suit.

Her 50 meter free, a 27.59, was nothing close to a best time. That wasn’t the expectation, though, as she is over six months pregnant– the fact that she got up and raced a 50 free was incredibly impressive.

Vollmer has already had one son, Arlen. After the 2013 World Championships in Barcelona, where Vollmer earned a individual bronze in the 100 fly and swam on the gold medal 400 medley relay for the USA, she took a break from the sport to give birth to Arlen. She thundered back to the pool, though, and returned to competitive form to earn another bronze in the 100 fly and take silver as part of the American 400 free relay.

The 50 free was Vollmer’s only race of the meet.

That’s pretty bad ass to swim at that level while 26 weeks pregnant. Kudos to Dana!

I think just the fact that she got the suit on at 26 weeks deserves and award!

that has to be the fastest time in history for a 26-week old…. can someone check the stats on that?

LCM to boot…. kid isnt afraid to work either!

LOL, new National Record in the LC50 for the negative 20 to negative 10 week age group.