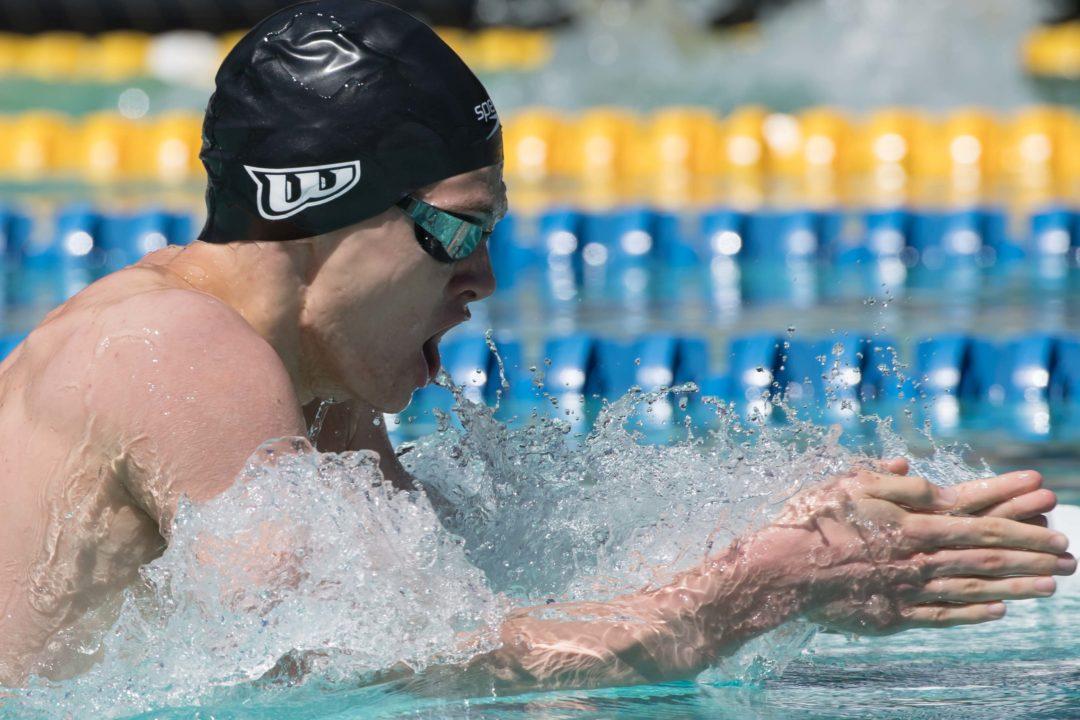 Wichita Heights picked up its third Kansas 5-1A Boy's State Swimming & Diving title Saturday, February 16th, at the Capitol Federal Natatorium in Topeka, KS. Also the team champions in 2015 and 2017, Wichita Heights did not win a single event Saturday, relying on its depth for the victory instead. Current photo via Mike Lewis/Ola Vista Photography

Wichita Heights picked up its third Kansas 5-1A Boy’s State Swimming & Diving title Saturday, February 16th, at the Capitol Federal Natatorium in Topeka, KS. Also the team champions in 2015 and 2017, Wichita Heights did not win a single event Saturday, relying on its depth for the victory instead.

Wichita Trinity Academy’s Ben Patton, who has committed to swimming at Mizzou in the fall, stole the show Saturday with his incredible performances in the 200 IM and 100 backstroke. First, in the IM, Patton blew away the field with an incredible 1:46.78, nearly 12 seconds ahead of the runner-up, Cameron Stanley from Topeka Seaman High School, who touched in 1:58.48. Patton’s swim erased the 12-year-old 5-1A State Record of 1:49.50, swum by Newton High School’s David Winter in 2007. Together, Patton and Stanley were the only swimmers to break 2-minutes in the race.

Later, in the 100 backstroke, Patton threw down a quick 48.60 to obliterate David Winter‘s 2006 State Record of 50.28. Aidan Gantenbein of Wichita Heights placed 2nd in 52.04, the highest finish of any swimmer from the 2019 team champions. Gantenbein also picked up bronze in the 100 freestyle with a 47.77, exactly equaling his time from the prelims.

Shawnee Mission Bishop Miege won the 200 medley relay, with the team of Max Hernandez-Nietling, Lex Hernandez-Nietling, Kevin Hannon and Kyle Askew setting a new State Record in a time of 1:35.02 during Friday’s prelims. In finals, the same foursome of defended their number-one seed, winning the race in 1:35.32, well ahead of the runners-up from Topeka Seaman, who touched in 1:38.17. M. Hernandez-Nietling posted an impressive 22.73 as the backstroke lead-off on the medley relay, which brother Lex followed up with an equally impressive 25.25 breaststroke split. Hannon and Askew finished off the race, splitting 24.96 and 22.38, respectively, over the fly and backstroke portions of the race.

Max Hernandez-Nietling, brother and teammate of Lex, also won two individual events Saturday. First, in the 50 freestyle, M. Hernandez-Nietling stopped the clock in 20.84 seconds, the only swimmer to break the 21-seconds barrier. Andrew Kutney of Saint Thomas Aquinas touched second in 21.18, while Aidan Scott of Wichita Independent took third in 21.36. Not long after, in the 100 butterfly, M. Hernandez-Nietling secured his second victory with a dominant 48.91 to make him the only swimmer under 50-seconds. The silver medal went to Harry Tjaden, a junior from Saint Thomas Academy, who stopped the clock in 50.56, while bronze went to 50 freestyle runner-up Kutney with a 51.82.

Emporia High School’s Reed Slayden took the gold in diving, totally 433.55 points. Keetan Munsell from Salina South took 2nd with 401.00 points, while Kolby Adams of Wichita Heights took 3rd, securing a vital 16 points. Tate Harrison, also of Wichita Heights, placed 5th on the 1-meter board, raking in another 14 points for a total of 30. Topeka Seaman, which finished 2nd in the overall team standings, falling just 2 points short of Wichita Heights, scored only 2 points in diving with a 15th-place finish from Tristan Hahn.

The Hernandez-Nietling brothers were impressive. Their winning swims were sandwiched into dominant relay wins. This despite being sick with bad colds. 6A swimmers dominated the Kansas State meet!!!