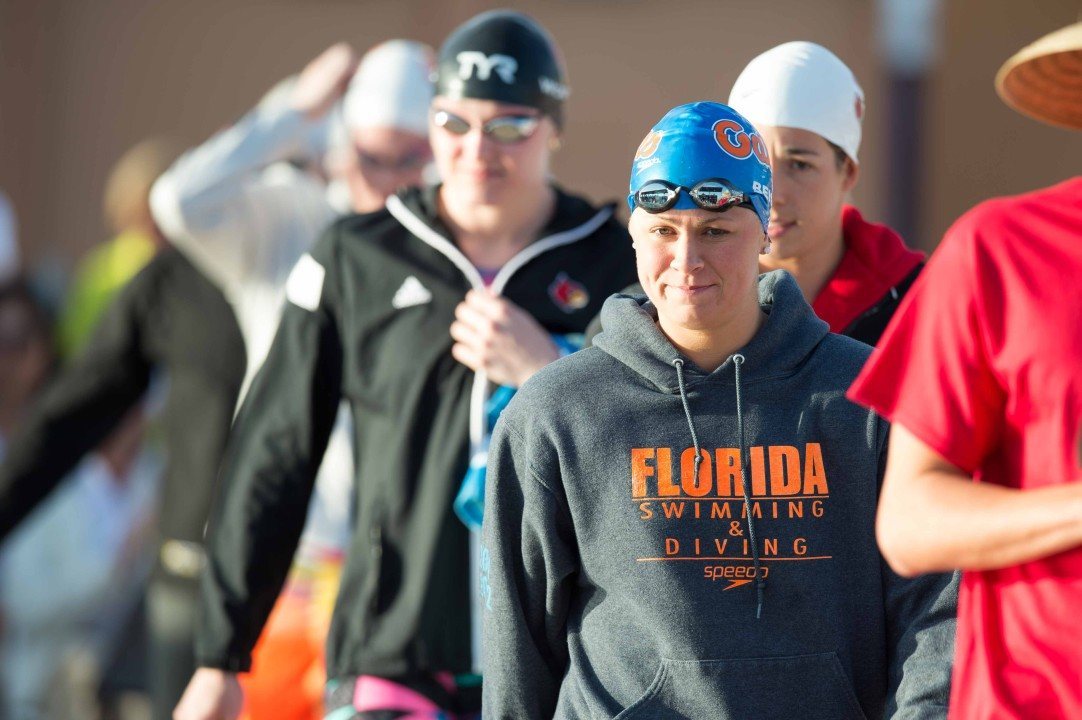 Elizabeth Beisel qualified third this morning despite a hand injury on Tuesday that forced her to scratch all her events between the injury and the prelims of the 200 back. Current photo via Mike Lewis/Ola Vista Photography

This morning, Elizabeth Beisel won heat 12 of the 200 back in 2:10.01, despite a hand injury that forced her to pull out of all her events between securing an Olympic berth in the 400 IM on Monday and her 200 back this morning.

Beisel is the third qualifier going into semifinals tonight, coming in behind fellow 2016 Olympic teamers Missy Franklin (2:09.69) and Maya DiRado (2:09.76).

Walking off deck, it appeared that Beisel had tape on only her pinky finger, an improvement from Tuesday night, when she was seen in the CenturyLink Center with her little finger taped to her ring finger.

Swimming beside Beisel in heat 12, the first circle-seeded heat was seventeen-year-old national teamer Claire Adams of Carmel Swim Club, who broke her hand just over a week ago. The taping on Adams’s hand and last two fingers looked much more serious, and the hand certainly affected her performance.

Both swimmers were cleared to wear hand tape during the event, something made possible by USA Swimming’s recent clarifications on the use of tape for medical necessity.

With Claire Adams injured, Beisel slightly injured, and Pelton out of shape and is disinterested, suddenly Missy’s chance to add the second individual event seems brighten up.
So I conducted a quick poll during the prelims:

As of this writing, 45 commenters think Missy will nab the 200 back ticket, while 9 are not convinced.

I just want to say how proud & happy I am for our women from Santa Rosa going to Rio: Go Maya & Molly!