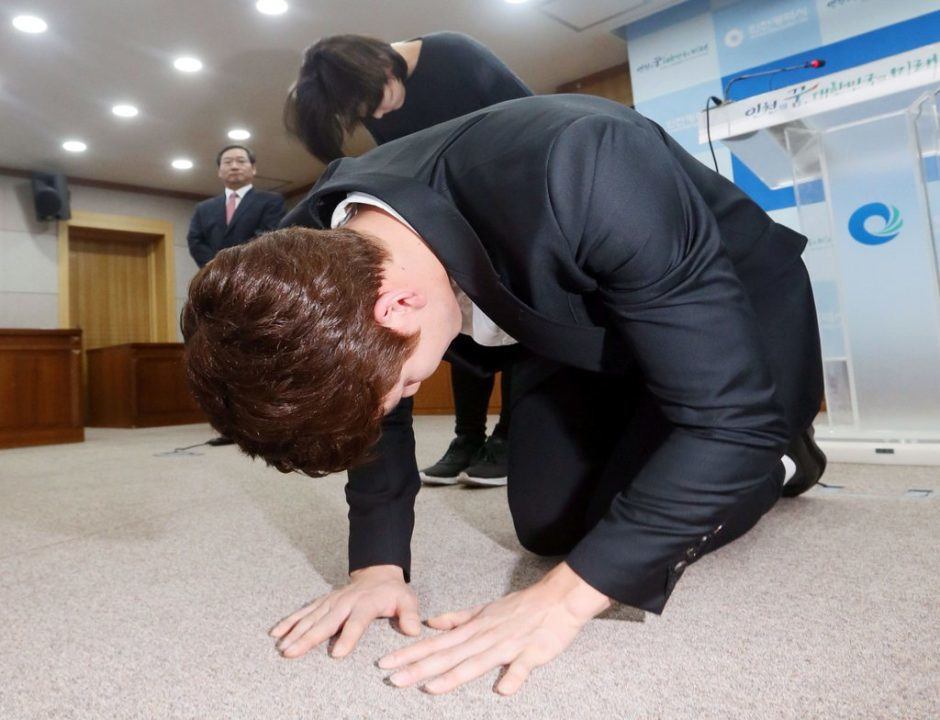 South Korean swimmer Park Tae Hwan is literally begging his nation's Olympic Committee for a chance to compete in Rio. Current photo via courtesy of @STsportsdesk

On the heels of the release of the initial roster of South Korean swimmers set to compete at the 2016 Olympic Games in Rio, the nation’s once mega-star, Park Tae Hwan, is now begging to be included. At a meeting with the Korean Olympic Committee (KOC) today, Park got down on his knees begging for an opportunity to race for South Korea at this summer’s Games in Rio.

Although on March 2nd Park completed his 18-month FINA-imposed ban for having tested positively for steroids back in 2014, he is now serving a punitive ban by the KOC. The ban entails having to wait 3 more years before being selected for a national team, per the punitive KOC.

Park recently competed at the South Korean Olympic Trials, where he earned golds across the 100m/200m/400m/1500m freestyle events, swimming faster than the FINA “A” Olympic Qualifying standards in each.

Speaking to the KOC, Park said, “As a swimmer, I feel it is most important to speak through records and results in the pool. I hope I am given a chance so that I can deliver a good performance for the people and contribute to the nation.”

Some speculate there is still a chance the KOC may relax its rule, with critics calling it a double punishment for the same offense. However, last month, the KOC said it was “not appropriate to amend national team selection regulations for a specific person.”

Contribute to the country by cheating and begging? How about doing it by standing up like a man and taking responsibility for your crimes against the sport? “It is most important to speak through records and results in the pool”….Well, there’s the problem. Maybe if you understood that integrity and playing fair are far more important than results, you wouldn’t find yourself prostrate before the world on account of your own selfish desire for more glory and money.

Much respect for South Korea for sticking to their decision. They are not stopping him from being a swimmer but they are not allowing him to represent their country. I think it sends the right message to the other athletes that it is a priveledge to go to Rio and it that can be taken away for any type of major cheating.

No man should ever beg on his hands and knees for a sporting event.

its all planned. they told him to do it for the media. the KOC is very corrupted.

Once the KOC pronounced that it cannot change the rules for an individual, the door was locked. They cannot reverse that statement without totally undermining their own publicly stated principles. Good for them for paying the price of integrity.

ITT: People who are unfamiliar with other culture’s customs.

Is this one of those uniquely Korean cultural things that might not be all that unusual in a downtown Seoul courtroom? Regardless of how we all feel about the actions of Yulia, Sun, Ous, Lance etc., did none of those guys would resort to this.

The South Koreans don’t want a cheat to represent their country, good for them. Hope they stick to their guns but it seems unlikely.

Personally, after the FINA ban is completed then 3 years is overkill. At MOST it could say “once ban is lifted then they must serve the same amount of time suspended from representing the country as they did for FINA ban.” So basically whatever FINA says just doubled it which would be a blessing but Park still wouldn’t compete.

A lifetime ban would not be “overkill”. The USA should lead by example and ban cheaters forever. Period. Apparently, cheaters need a much stronger deterrent. Why do we allow them to compete again—ever—once they’ve betrayed the sport?

fluidg – simply put, the USA doesn’t have the authority to ban first time offenders for good. Their only choice would be to remove their signature from the WADC, which would have far-reaching repercussions that probably includes being unable to participate in the Olympics.