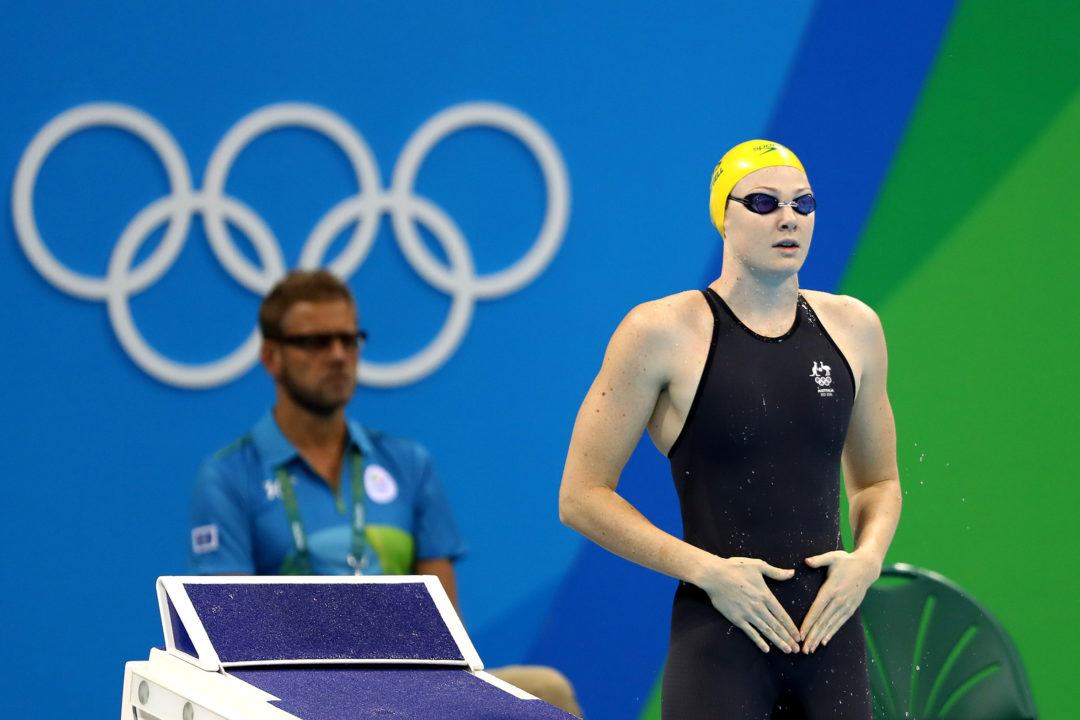 Although not making herself available for World Championships squad selection, Cate Campbell is ready to race in Brisbane, clocking the world's first sub-53 second 100m freestyle this season. Archive photo via Simone Castrovillari

Racing in his first official meet under Commercial Swimming Club’s Simon Cusack, double world champion Mitch Larkin has only raced time trials so far in 2017. The 23-year-old Olympic silver medalist says he’s happy to have this meet in Brisbane, where he can ‘sleep in his own bed and eat his own meals’. The relaxed confidence showed, as he notched the swiftest morning 200m backstroke time of 1:58.06 to take the top seed less than a second outside of the virtually-guaranteed qualifying time of 1:57.12.

A pair of 18-year-old rising stars finished directly behind Larkin in the 1:58-range, with St. Peters Western teammates Jack Cartwright and Clyde Lewis touching in morning marks of 1:58.90 and 1:58.91, respectively. For Cartwright, his morning outing rests just .10 outside of his personal best of 1:58.80 set at last year’s Queensland Championships. For Lewis’ part, he just raced his way to the first sub-1:59 mark of his career, helping to possibly set the tone for a breakout meet for the World Junior Championships 200m IM reigning champion.

Reminder that there is no semi-final format at this year’s edition of the National Championships; instead, the format goes from prelims straight to finals.

As expected, David Morgan scored the top seed of the morning, registering a mark of 52.69. That time is right where the man was at in the early swims of last year’s edition of this meet, where Morgan fired off a 51.64 to qualify for the Olympic Games. The Aussie-mandated QT for Budapest tops even that mark, sitting at 51.51. As such, it will be a real challenge for any Aussie male to dip beneath the threshold.

19-year-old Bond University athlete Brayden McCarthy is an up-and-comer among the Aussie sprinting ranks as a member of the Aussie men’s 4x100m freestyle relay that won gold at the 2015 World Junior Championships. This morning he cranked out a personal best in the 100m butterfly event, knocking almost a full second and a half off of his previous personal record of 53.85 from that same Singapore event.

The 5 members of the Aussie women’s gold medal-winning 4x100m freestyle relay across Rio’s prelims and finals made it into the top 8, led by reigning 100m freestyle world record holder Cate Campbell. Smartly splitting 25.31, 27.47 for a total time of 52.78, C1 scored the first sub-53-second time in the world, although she’s already made it known she is not making herself available for World Championships selection.

Sister Bronte is right in the mix as well with the 3rd seeded time of 53.54, while 200m freestyle Olympic bronze medalist Emma McKeon checked in with a super solid 53.26. Shayna Jack, the 18-year-old age group sensation that has been making a name for herself in the senior ranks as of late, earned the 4th seed in an impressive 53.60, marking the first time the Commercial swimmer has dipped beneath the 54-second threshold. The Campbell sisters’ training mate registered splits of 25.62/27.98.

With Jack having clocked a time under the 53.92 qualifying mark, that bodes extremely well for the Aussie 4x100m freestyle relay sans C1 in Budapest.

Although the fastest heat will be racing tonight, 18-year-old Chelsea Gubecka earned the fastest time of the morning swimmers, stopping the clock at 8:42.32. Both Gubecka and younger sister Chloe Gubecka each punched a ticket to the World Championships already this year, having finished 1st and 3rd in the 10k open water race at the Aussie national championships back in January.

Expect Kiah Melverton and Australian national record holder Jessica Ashwood to battle it out in tonight’s final of the event.

The speeding bullet that is Cameron McEvoy didn’t waste any time throwing down the heat in Brisbane, rocking the only sub-22 second 50m freestyle in a big way. Already owning the world’s 3rd fastest time of 21.88 from March’s NSW Championships, McEvoy took things up a level to notch a prelims winning time of 21.73. That beats GBR’s Ben Proud for the #1 time in the world by just .01, with finals yet to take place tonight.

With 100m freestyle Olympic champion Kyle Chalmers not including the 50m freestyle in his meet repertoire, the potential spot for the #2 swimmer is wide open, although James Roberts staked his claim somewhat with his time of 22.38. He’ll need to shave more than .3 to snag the qualifying time of 22.02.

Note that Morgan and McCarthy pulled a quick double, turning quickly around to race this event after their 100m butterfly heats.

If the prelims are any indication, we’re in for a tight 400m freestyle final tonight, as David McKeon, Mack Horton and Jack McLoughlin all finished within about a half a second of one another. In an earlier heat than his younger counterparts, St. Peters Western’s McKeon touched in 3:49.23 to take the top seed, while Horton and McLoughlin kept it close in the final heat. Horton, the reigning Olympic champion in this event, finished in a solid time of 3:49.52 to McLoughlin’s 3:49.79.

It’s deja vu from the 2016 version of this meet with these 3 men, as Horton, McKeon and McLoughlin finished in that order in this event at last year’s Olympic Trials. Horton’s final time was 3:41.65, followed by McKeon’s 3:45.09 and McLoughlin’s 3:46.27, but we most likely won’t see results that quick tonight with the QT sitting at 3:47.19 and the fact that this is most swimmers’ first rest/taper meet since Rio.

We saw two women touch in times under 32-seconds this morning, but expect a few more to join Jessica Hansen and Georgia Bohl in that territory tonight. Although a non-Olympic event and one in which athletes cannot solely qualify, many swimmers use this as a warm-up race to their primary 100m and/or 200m event. If they make the squad in a Olympic event, then they’ll be considered in the non-Olympic events they won.

Can someone please explain to me why I’m able to watch a live meet in Australia with zero streaming problems? Why is it that a meet in another country comes in crystal clear and there are all kinds of streaming problems when we watch NCAAs and the Arena Pro Series. We have to do better. Still to this day my most enjoyable and problem free online meet was the 2015 Sea Games in Singapore. That’s really sad. This Australian Championship is also crystal clear in America.

Great picture quality. They even have the time showed at the bottom of the screen too for every swimmer. Awesome.

If only the live results updating was as spectacular.

Pictures great but no idea who is qualifying by results??

Finals aren’t on until tonight. But the 100m women’s free is going to be insane going by the heats. Would love to see Shayna get an individual spot but at this stage it’s going to be tight.

4 women under 54? I thought the Dutch final was quick and this was just prelims in AUS.

Qualifying?
This is still prelims, don’t let Cate’s 52.7 trick you into thinking this is final session.

The reason for the good video streaming could be attributed partially to the TV network that currently sponsors Swimming Australia and will continue to do for the foreseeable future. The TV network will be taking over exclusive streaming of the finals during the National trials, which may mean those outside of Australia, unless you have VPN, may not be able to view the finals.

Super impressed by that swim…bodes well for a C1-less relay perhaps!

Also hopefully it’ll also flow onto her 50m and 200m swims too. Since she broke her PB in the 200m at the NSW Champs last month.