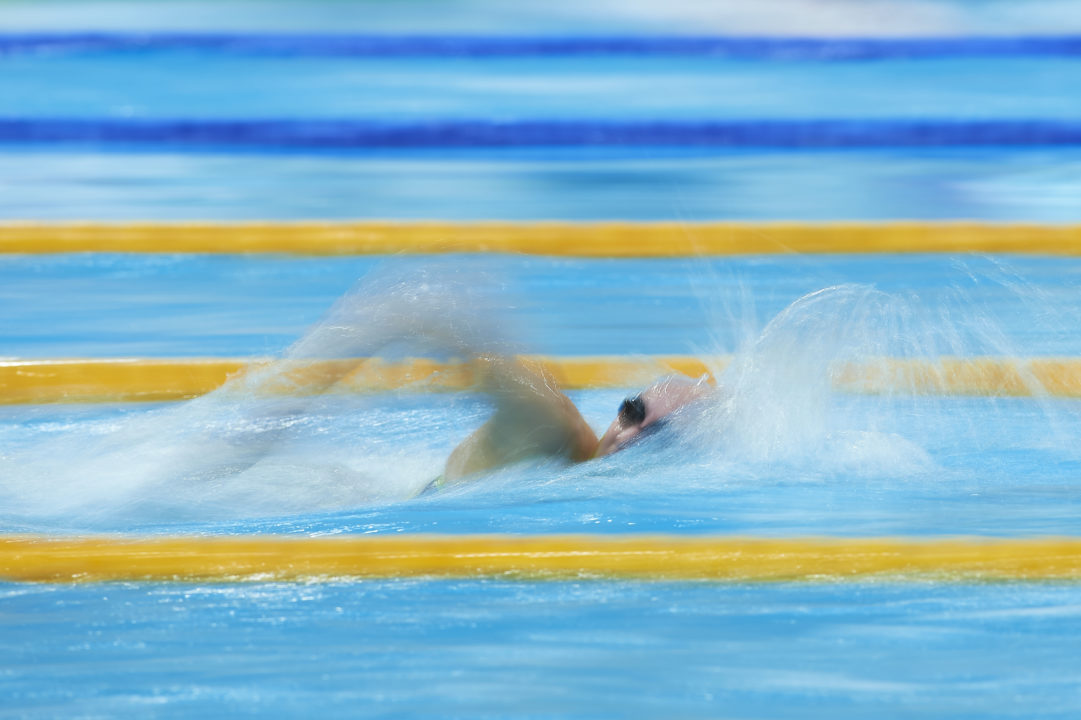 Check out the ferociously speedy times coming out of both women's and men's sprint freestyle events at the 2022 Australian Age Championships. Stock photo via Jaimi Joy, www.jaimijoy.com

16-year-old Flynn Southam once again made some noise in a sprint freestyle event, capturing a new national age record in the men’s 100m freestyle. His time of 48.60 overtook 2016 Olympic champion Kyle Chalmers‘ record from 2015, putting this Bond teen on the map for good things to come when the Aussie World Trials take place next month.

But the women’s 100m freestyle saw some fireworks today in Adelaide as well, with the top 3 finishers in the 15-year-old age category all remarkably hitting times in the 54-point range.

Tonight she tried this 2-lap affair on for size, firing off a huge personal best of 54.30. Splitting 26.41/27.89, the ace beat the field by about half a second en route to topping the podium. Her result here scorches her previous personal best of 55.24, a mark she put up at December’s Queensland Championships.

Next in line was Olivia Wunsch of Carlile who touched in 54.82, while Bond’s Milla Jansen also got on the board under 55 with a personal best of 54.94.

For Wunsch, she had logged a career-fastest time of 55.13 at this past January’s NSW State Age Championships. As for Jansen, she was 55.09 at an age meet just last March.

As fast as these women were tonight, as a testament to the sprinting prowess that defines Australia, especially on the women’s side, the national age record still sits one second away at the 53.30 Olympic medalist Cate Campbell established in 2008.

So it’s been reported that McKeon and Chalmers will skip both trials and Worlds but have been preselected for Comm Games. Titmus will swim at trials but is still skipping Worlds.

And it’s very likely that at least one of them will be in 52 in 2024.
They know how to develop 52 flat-start girls in Australia in 2 years when they have a young talent in hands.
Gretchen Walsh would have been in 52 last year if she was Australian and trained in long course all year there.
They have that sprint freestyle culture on the women’s side and a legacy to continue.
And if USA doesn’t want to be humiliated on its home soil in 2028 in the relay then it’s time to change something in their strategy and way of training and development. Best young American girls must focus on technique and train in… Read more »

Those male freestyle relay champions are ALL trained in BOTH meters and yards. Plus, lots of international medalists are trained collegiately in yards. Don’t know why you dislike yards.

Dang they are gonna continue to be a threat for years to come! Love to see it!!

It’s a mystery to me why Australia can produce so many talented female sprinters but hardly any promising breaststroke or IM swimmers.

Relays
All through school swimming relays are the jam, age nationals too.
Breaststroke is lame, but the women have defs had success, leisel jones and then Jessica Hansen, but yeah no one incredible, can’t help when once in a generation athletes like ruta were dominating too
IM no one really since Stephanie rice and Alicia courts

Zac Stubblety-Cook is the Olympic 200 M breaststroke champion. Chelsea Hodges matched Lydia Jacoby in the medley relay in Tokyo, where Australia won gold. Kaylee McKeown was ranked #1 in both the 200m and 400 m IM heading into Tokyo, but opted to swim the backstroke events. Mitch Larkin was a finalist in the 200 IM in Tokyo and Brendan Smith won Bronze in the 400 IM. Facts, please.

In my experience club programs in AUS do a lot less IM work than USA clubs. I have swum at a few clubs in both countries and there was always much more aerobic free in Australia, and much more aerobic IM in the US.

It goes in cycles.

AUS sprint freestyle was “in a hole” from the Shane Gould era through to the turn of the century. O’Neill WAS highly respectable but the 100free was her 4th event and thus rarely prioritised.

Conversely, women’s breaststroke had considerable depth from the early 90s through to the end of the 00s with the likes of Linley Frame, Sam Riley, Rebecca Brown, Brooke Hanson, Helen Denman, Liesel Jones, Brooke Edmiston, Sarah Katsoulis being either WR holders, Olympic or World medallists.

These things tend to go in cycles.

AUS women sprint freestyle was in a hole from the Shane Gould era to the turn of the century. O’Neill WAS good but the 100fr was her no4 event and thus rarely prioritised.

Conversely, AUS had a very solid female breaststroke production line from the early 90s through to the end of the 00s; starting with Frame/Riley/Brown/Denman then Hanson then the Jones/Katsoulis/White/Edmiston generation.

What probably gave impetus to the sprint freestyle renaissance was the increased emphasis on relays during the 90s AND the “buy-in” from leading names like O’Neill/Thomas whereas it had often been the case of “oh, do I really have to ?”

im there’s been rice, coutts, both Mckeowns and seebohm used to swim im

Breast has had jones, t mckeown, Hansen and now Hodges

To say there’s no talent is a stretch

Whatever they do, tell them not to get sucked into swimming scy or scm. That’s where promising USA careers go to die.

SCY DNE in Aus, and typically SCM is of little consequence.

Imogen Clark Sarah vasey were not selected for the worlds

Any one of those three girls could have swum the slowest leg of Australia’s 4x100m in Tokyo- and comfortably won a Gold medal!