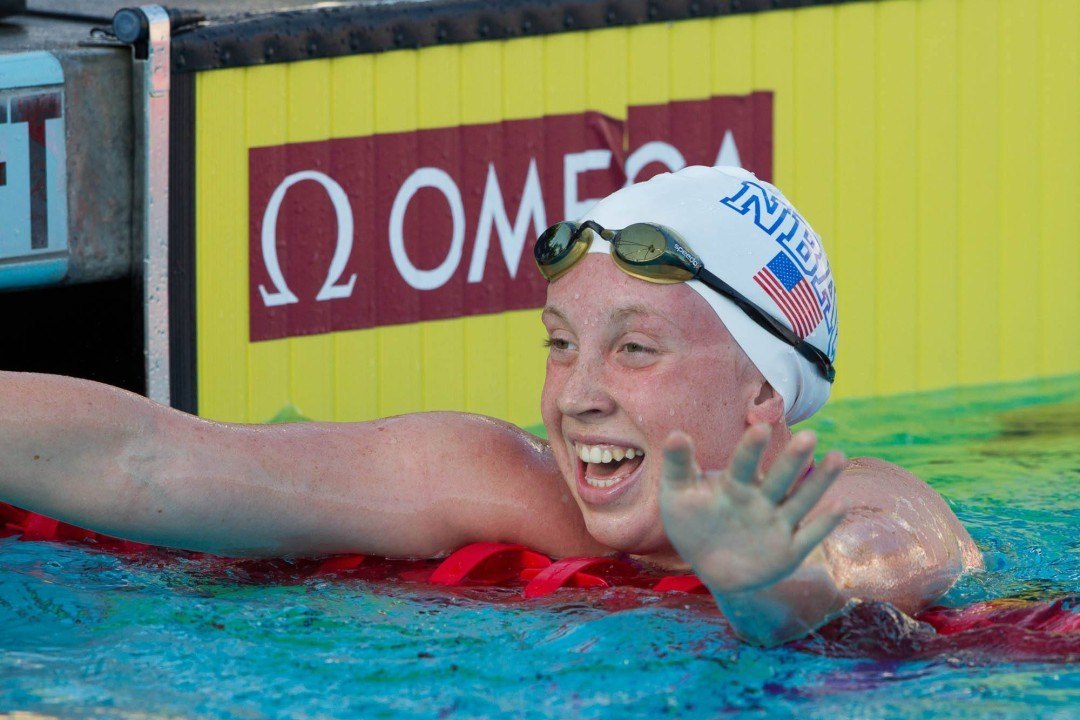 USA's Sierra Schmidt claimed gold in the 800m freestyle today, but take a look at the overall medal picture after two days of competition in Singapore. Archive photo via Tim Binning/TheSwimPictures.com

A battle is certainly brewing between the Australian and American teams, as each has a lead in a portion of the medal totals after two days of competition at the 2015 World Junior Championships.  Team USA racked up the most total medals as a whole on the two days with 11, but the Aussies have the most golds to their credit, 4, to lead in that all-important category.

The Dolphins from down under came on strong today, earning a slightly unexpected win in the men’s 200m IM event in the form of Clyde Lewis’ exceptional swim.  Minna Atherton also rocked the house with her new World Junior Record in the women’s 100 backstroke, tying that of the yet-to-be-ratified record from American Claire Adams at U.S. Nationals (59.58).

The other golds for the Aussies were on account of their two dynamic relays that charged to the podium, both having occurred yesterday.  The women’s 800m free relay dominated with a new World Junior Record, and the men’s  400m free relay also nabbed a gold for their performance.

Despite American Michael Andrew not standing on the medal podium in an individual event as of yet, the team still fared well with key swims from several other up and comers on the roster.  Maxime Rooney registered a monster 200m freestyle when it counted to pull in the victory.  Teammate Grant Shoults added a silver to the total in that same event after having won his own gold yesterday in the men’s 400m free.  A symbol of consistency this summer, Sierra Schmidt, also raced an eye-catching new meet record to claim gold in her 800m freestyle race. Michael Taylor, Reece Whitley and Claire Adams were able to add silvers  to the United States’ total medal counts on day 2.

Of note, Turkey got on the board today with Viktoria Gunes‘ win in the women’s 50m breaststroke, clinching that country’s first ever gold of any junior world championships.  Romania’s Robert Glinta also tallied a gold for his country by winning the men’s 100m backstroke in meet record time.

Where is Kenya?
They are so impressive at track and field world championships. That’s really scary. They will soon win the 100m ! 😆
Looks like they don’t have the same training secrets in swimming yet.

We’re busy watching how US swimmers do it on You-Tube. Watch out. We’re coming!

It is either a medal table or a gold medal table. The US leads the medal table, not Australia. ‘Leads in that “all-important” category….” While golds are certainly most important, it seems the overall health of a program is reflected not just in golds but also in depth. A few years back the Australians had a great meet at Worlds or Olympics, winning a lot of Gold, the swimming equivalent to the card game concept of “Aces and spaces.” When the scoring for the meet, according to the approved calculation in the meet rules came out, USA was comfortably the winner of the team trophy. There was such an Aussie uproar from coaches and their sporting press that it was… Read more »

After double checking, they have no bronze medal. I know I may be splitting hairs but I am just going with accuracy.

tr – not splitting hairs at all! Appreciate the comment. I originally grabbed FINA’s medal count table from the meet site, but have since re-checked all and, obviously you’re right no bronze for Australia. Interestingly, New Zealand does have a bronze from Bobbi Gichard’s 100 backstroke, which is not accounted for on FINA’s table…I’m wondering if they added it under Australia by mistake. Just a thought. – Retta