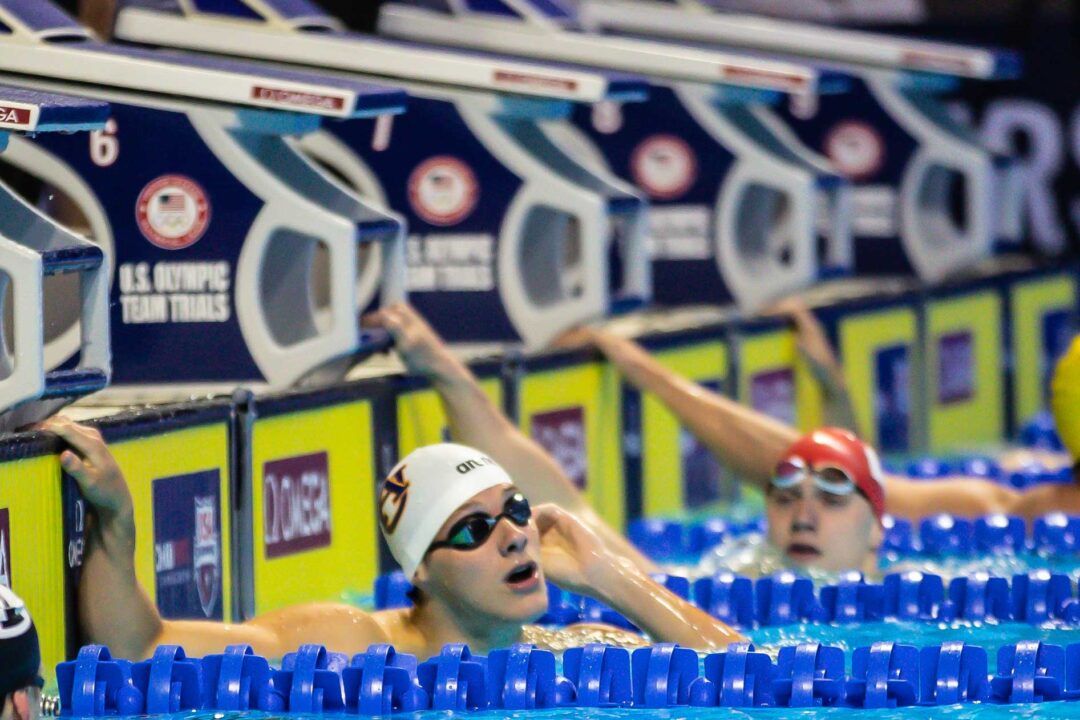 The Auburn men are building some momentum this week in Omaha toward their first season under new head coach Ryan Wochomurka. Current photo via Jack Spitser/Spitser Photography

There were just two scratches for Saturday’s finals session at Wave I of the 2021 US Olympic Trials in Omaha, both coming in the women’s 400 IM, and both out of the B final.

Malia Rausch, who was 12th fastest in prelims, is dropping the 400 IM to focus on the 200 free. In the 200 free, she qualified for the A final in 8th place with a 2:03.18. That leaves her about 1.4 seconds behind the second place spot, which is important because the top two finishers in finals earn spots in the Wave II finals starting next weekend.

She has a personal best time of 2:00.87 done at the 18 & Under Spring Cup site in Des Moines in April, so that top two finish is within reach if she gets back to her best in finals. Rausch trains with the Austin Swim Club in Texas and is committed to begin training at Ohio State next fall.

The other scratch in the 400 IM is the 16th-place finisher in prelims Ally Larson. There were only 16 legal finishers in the race, so nobody has been pulled up into the B final.

Below are some of the highlights to look for in finals:

Nebraska senior Autumn Haebig was one of the best stories on night one of the meet, and while her two-race streak of personal bests was snapped in prelims of the 200 free, she still cruised to a comfortable-looking 2:01.59 in the 200 free. The way she split that race (29.12-31.07-30.69-30.71) looked like she has more to give in finals, though that could be deceiving.

Ryan Wochomurka hasn’t been in charge at Auburn for long enough to take much appreciable credit for the Tigers’ results this week, but his program is already rebuilding some momentum this week. After Lleyton Smith finished 5th in the 100 back on Friday and swam a 56.11 in prelims, the best time he’s been in almost 2 years, Reid Mikuta had the best swim of Saturday’s prelims session with a 1:01.87 in the 100 breaststroke.

After stagnating times in this event since his junior year of high school, Mikuta swam a best time in May and then on Saturday qualified first into finals and knocked almost a second off that time again. He had the only Wave II cut of the morning (though he still will need to finish top 2 in order to move forward).

Reid Mikuta hasn’t stagnated. There hasn’t been a long course season since his junior year.

there are always many side to stories, seems that writer chose the side that make Ryan look better.

Agreed. Ryan hasn’t been on deck coaching this summer…

Well after, college they can check out Huntsville. Huntsville is getting a lot of auto engineering jobs doe to Toyota-Mazda creating over 2,000 jobs in the area. Plus, Jeff Bezos claims that someone bid 2.8 million for a seat on the blue origin rocket. Blue Origin has an engine plant in Huntsville. Bezos claims that Blue Origin is really for tourist to ride their rocket creating more engine jobs in Huntsville. Huntsville ain’t like the rest of Alabama. In fact its predicted now to be the largest city in the state surpassing Birmingham.