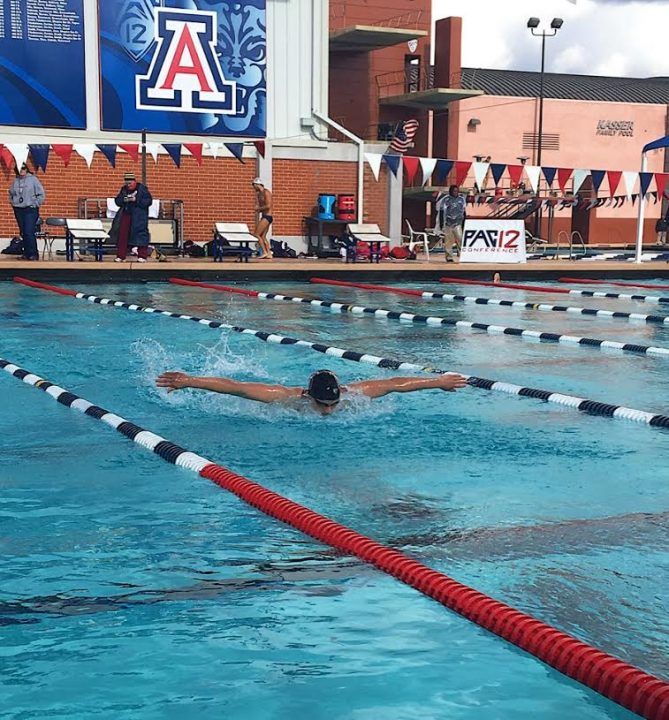 University of Arizona vs. UCLA

The Arizona Wildcats won its first dual meet against UCLA since the 2017-18 season, taking first place in 10 out of 14 events.

Mortensen took home the win in the 200 (1:49.12) and 500 (4:58.30) free. The Danish swimmer earned her reputation at Arizona for becoming the fastest swimmer on the team in the 100 free when she was a freshman. Last season, though, she still received NCAA B cuts in the 200 and 500 free, and her double wins in the events show she can hold her own in mid-distance or distance events. She did not swim the 100 free at this meet.

Other Wildcats also took home individual event wins. Aria Bernal won the 100 back in 55.04. Her previous three seasons, she’s led the team in the event with times hovering between 52 and 53 seconds, always scoring an NCAA B cut and even ranking among the top eight 100 backstroke times in program history in the 2019-20 season. Her time in the meet against Hawaii and Wisconsin, however, is still her fastest of the season, making her the ninth-best swimmer in the event in the Pac-12.

The Bruins won four individual events at the meet, including a 1-2-3-4 sweep of the 200 IM led by senior Ella Kirschke (2:03.54). Last season, Kirschke qualified for NCAA Championships for the first time in her career, swimming the 200 free and 200 IM, which she swam in 1:59.35, at the meet. Though she won this event, her time was relatively slower than her 2:01.77 performance against UCSB, which has her ranked as the seventh-fastest performer in the event.

Freshman Paige MacEachern won the 1000 free in 10:17.91. Her events in high school were the 100 breast and 200 IM, but she still held her own in the distance race where every competitor was 18 years old.

The Bruins will compete at the Trojan Diving Invite starting Nov. 12. The Wildcats will return to action Nov. 18-20 at the UT Diving Invitational.

Is the girl from Turkey swimming for them? Also Grover hasn’t raced yet this year? Anyone know.

If only the UCLA athletic department cared about their swim team. Top notch academics and location and nice pool. They should not be losing to U of A

Agree. Still a lack of a men’s program after ALL these years is SO shameful. So much talent in that state. I remember the day it was cut, one of the first, Ron was just crushed.