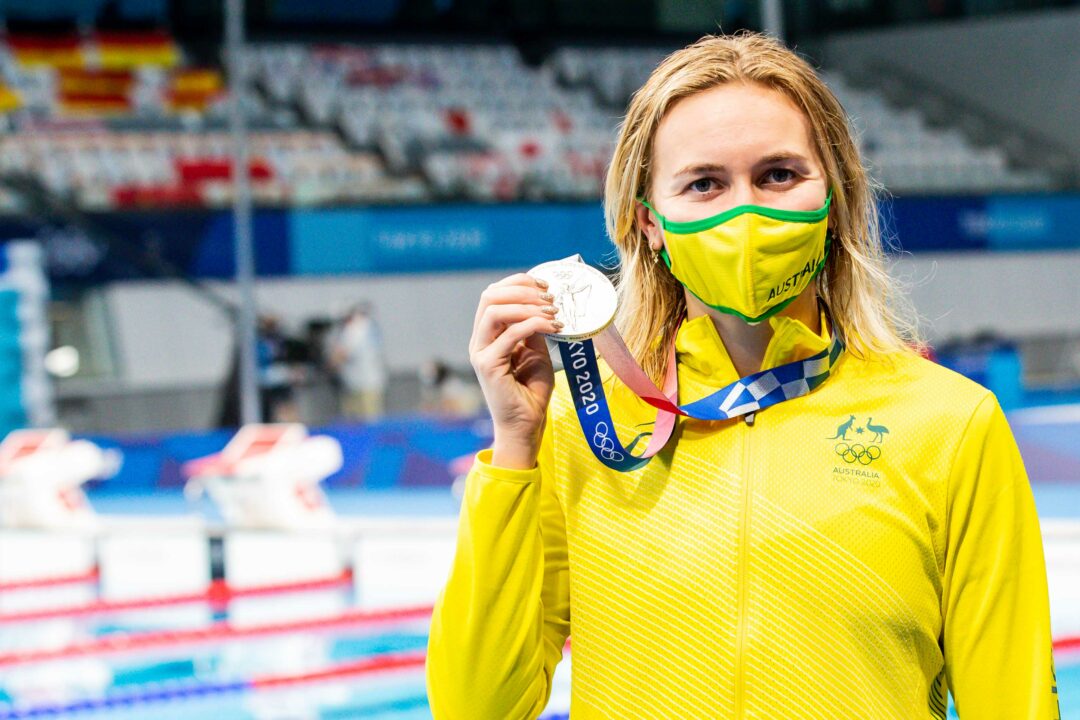 Roaring to the wall in a final time of 8:13.59, Titmus beat the field by over 4 seconds en route to overwriting the previous Games Record of 8:18.11 Wales’ Jasmin Carlin put on the books 8 years ago in Glasgow.

Entering this meet Titmus’ personal best and national record in this 8free event was represented by the 8:13.83 she logged last year in Tokyo when she took Olympic silver behind American Katie Ledecky. That outing checked in as Titmus’ first time under the 8:15 barrier in the event.

Tonight, the Dean Boxall-trained St. Peters Western star led the field wire-to-wire, with fellow Aussies Kiah Melverton and Lani Pallister in hot pursuit. Melverton was right on Titmus’ hip through about the 600m mark when Titmus pulled away and never looked back.

Melverton wound up with the silver in 8:16.69 while Pallister brought home the bronze in 8:19.16 this evening.

This 800m free represents Titmus’  third individual title of these 2022 Commonwealth Games, with the 21-year-old already having captured the 400 free and 200m free gold medals here.

As fast as Titmus was this evening on her way to a new Oceanic Record, there is still a big barrier until she gets into Ledecky territory. The iconic American Olympian owns the top 26 fastest times in history, including the current World Record of 8:04.79, with Titmus’ effort here inserting itself into the all-time list at slot #27.

Can we please have Boxall and Tusup team up for a reality coaching show???

400 free .. one of the most anticipated match ups McIntosh v titmus

LOL I had the same reaction. I realize nobody edits anything anymore but it’s a little exasperating having to constantly do it oneself.

Not bad to be the 2nd fastest ever in an event.

Let’s see if the Europeans can swim faster than 8.13 at their European champs in two weeks

The fast European at worlds was 8:19 so it doesn’t seem super likely but you never know.

The days of Rebecca Adlington and Lotte Friis are long gone.

Higher caliber than I expected. Rare outside an Olympic or world championship setting that 3 will be sub 8:20 pace throughout.

Given the showdown with McIntosh I expected Titmus to cruise along at 8:15 or 8:16 pace. But Melverton was 2 seconds faster than Budapest so Titmus needed to push it quite a bit.

It’s always interesting to me that the top women sprint home the final 50 of an 800 but not sooner than that, as if it would be illegal. You can count on 31 low or 31 mid one after another then here comes a 29.

She did train with him

I don’t know anyone who thinks dressel would be a serious factor in a world class 200.

Took a run at cracking the Ledecky top 25. I admire the effort I think she still has enough to hold off Summer.

Summer McIntosh pissed away a gold medal in the women’s 200 meter butterfly at the 2022 Commonwealth Games.

Gross. Glad to see you know better than her what she needs and wants from these games.

I agree. Titmas is in incredible form and I don’t think summer will beat her ….. this time.

Summer McIntosh is too young.

agree, but the upside is what will she be with 3-4 yrs of training, development and growth.

So far has anyone been able to identify the “shifts” and “improvements” that Arnie vigorously touted to media — along with 200 Fr indiv WR hype that did not pan out — prior to Comm Games?

Excited for the matchup because I think Summer will push Titmus on the front half, and that may result in Titmus nearing/breaking her WR.

I was today years old when I learned this.

People use them interchangeable but Troyy is technically right.

Oceanian means “in connection with Oceania”.

Oceanic means “in connection with the Ocean”.