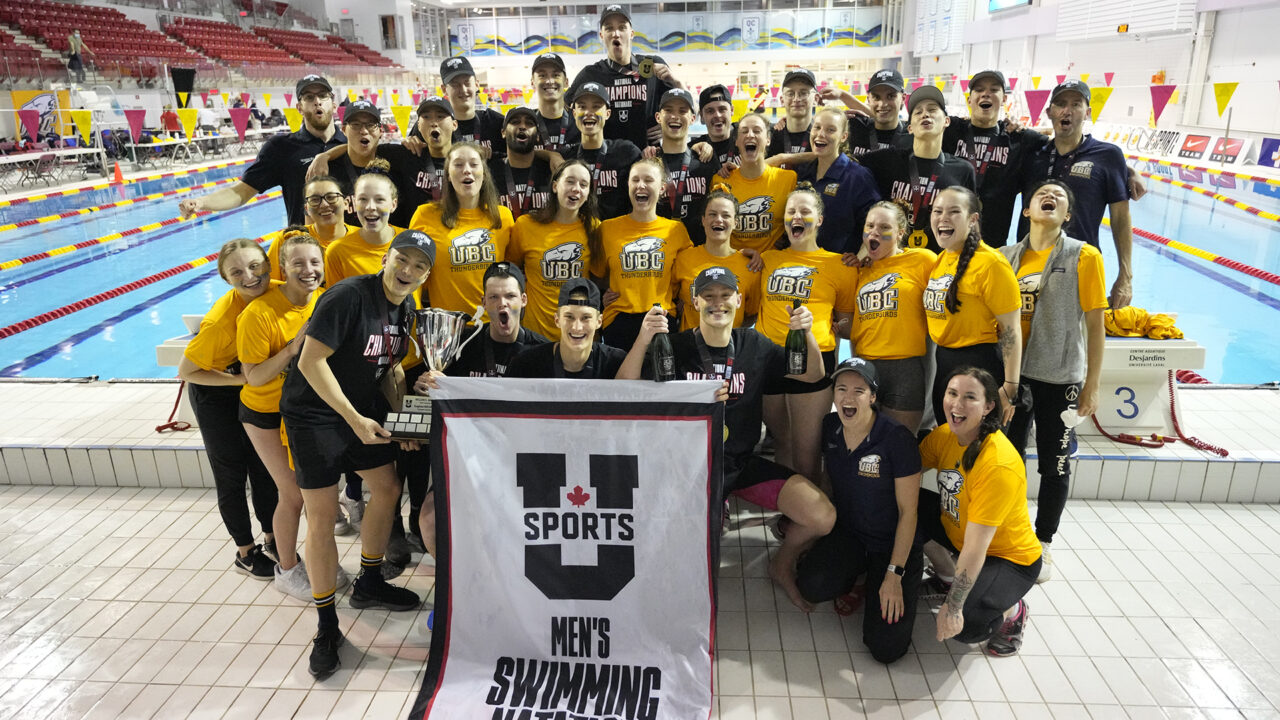 While the lost points from the USports championships won't cost UBC its 5th-straight team title, it did close the gap considerably between them and Calgary. Archive photo via UBC Thunderbirds

Canadian swimmer Tayden De Pol has received a one-month suspension for the presence of a banned substance. Among other consequences, this has resulted in a massive reallocation of results at the 2022 Canadian USports (collegiate) Championships.

De Pol tested positive for the banned substance methylphenidate on March 25, 2022 and again on April 6, 2022. According to the Canadian Center for Ethics in Sport, the substance was consumed as part of a prescription medication for which a therapeutic use exemption (TUE) had not yet been granted by the CCES. The CCES has since granted the TUE for use of methylphenidate on June 3, 2022.

The CCES requested a retroactive TUE, which is allowed under international anti-doping rules, but WADA denied the request.

TUEs allow athletes to take substances that might otherwise be banned from athletics, although not all banned substances are eligible for TUEs.

Methylphenidate is classified as a “specified substance” on the World Anti-Doping Agency Prohibited List. Under the rules of the Canadian Anti-Doping Program (CADP), an athlete facing a first violation involving a specified substance may be entitled to a sanction reduction based on an assessment of their degree of fault. In this case, the CCES proposed a reduced sanction from the standard sanction of two (2) years of ineligibility to a one-month period of ineligibility.

That one month suspension, which wasn’t announced until August 2, 2022, was served from May 17, 2022 through June 16, 2022. The formal Notice of Charge asserting a rules violation was issued on July 6, which wound up being after the suspension period ended. De Pol began a voluntary provisional suspension in the interim.

During the sanction period, the athlete, who resides in Lantzville, British Columbia, was ineligible to participate in any capacity with any sport signatory to the CADP, including training with teammates.

Besides the suspension, rules state that all results from the first positive test in March through the conclusion of the suspension were disqualified.

That includes the results of the USports championships that were held from March 24-26 in Quebec City.

De Pol swims for the UBC Thunderbirds, who won the overall team championship. Last year was his first season with the team. While the disqualification didn’t impact the men’s team standings, and the Thunderbirds will retain their 5th-straight USports title, several individual event results were impacted.

De Pol had a big freshman season for the Thunderbirds. He won USports championships in the 50 back, 100 back, and as part of the 400 medley relay.

The disqualifications also strip him of USports records in the 50 backstroke, which now reverts to Kelly Aspinall in the 50 back at 24.05, and the 2017 UBC men’s 400 medley relay at 3:32.36. Both times are in short course meters.

His 50 backstroke result of 23.54 at USports was just .05 seconds shy of Javier Acevedo’s Canadian Record.

In the 50m backstroke, Laval’s Arthur Millet will now be awarded gold, while UBC’s Dmitriy Lim will be upgraded to silver and Christopher Alexander of Lethbridge will now round out the podium in third.

In the 100m backstroke, Blake Tierney of the UBC Thunderbirds will now be awarded gold, with UBC teammate Hugh McNeill taking silver. Arthur Millet of the Laval Rouge et Or will be upgraded to bronze.

In the men’s 4x100m medley, the Lethbridge Pronghorns team will now be upgraded to gold, with the Toronto Varsity Blues being upgraded to silver. Rounding out the podium is the McGill Redbirds with an upgrade to bronze.

While the final men’s standings didn’t change, the disqualifications reduced the team’s scoring by 137 points. It closed the gap between UBC and runners-up University of Calgary by 142 points, but still left the dominant Thunderbirds 147.5 points clear for the title.

Methylphenidate is no joke – especially if you are taking a full dose. I hope in this case it was for a legitimate and daily use because it can really mess you up if abused.

As pointed out in the article, he had a prescription from a doctor.

Are we sure it’s only Tayden?