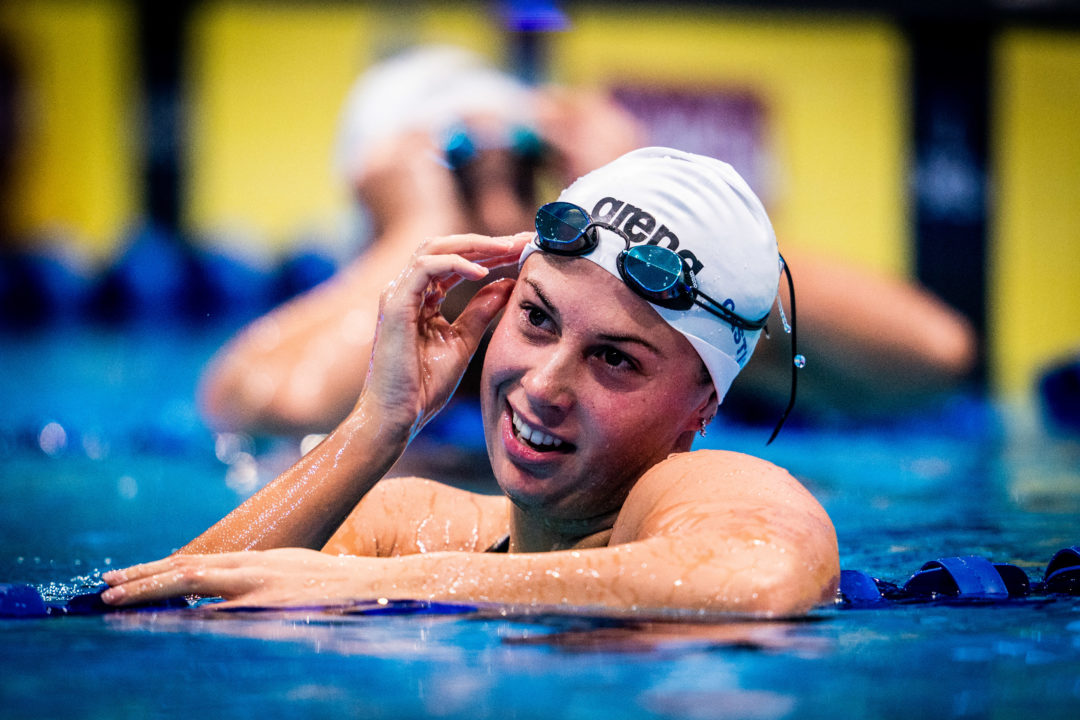 A number of Italy's top stars returned from altitude training to race at regional meets across the country this weekend, including Castiglione (above). Archive photo via Mine Kasapoglu for ISL

Giusy Cisale contributed to this report.

Italian swimmer Federica Pellegrini swam her best short course meters 200 free in over a year over the weekend at a meet in her home city of Verona. The swim came after 20 days spent in altitude training in Font Romeu, France.

That ranks as the 15th-best swim of her decorated career, and her fastest since a 1:52.88 that earned her a silver medal at hte 2019 European Short Course Championships.

Pellegrini arrived late for the International Swimming League season in 2020 after becoming infected with the coronavirus before her planned departure. Her best time in the 200 free during the league season was just 1:55.10 in November, though she improved to a 1:54.32 at a domestic event in December.

In her first meet of the year, in Geneva, Switzerland, Pellegrini swam 1:59.07 in the 200 free in long course.

Pellegrini isn’t the only Italian star swimmer to show up at the meet in Verona, which was mostly for local youth swimmers. 20-year old Thomas Ceccon, a 2018 Summer Youth Olympic champion in the 50 free, also made an appearance, and swam a new personal best in the 200 free in short course of 1:44.38.

Best known as a backstroker, Ceccon told SwimSwam Italia exclusively in February that he would try to qualify for the Olympic team in the 100 fly as well. This 200 free now further shows off his growing versatility.

Other members of the Italian National Team raced at smaller regional meetings around the country over the weekend too.

Teen breaststroke phenom Benedetta Pilato raced in Taranto, where she swam 2:26.70 (also in short course). That’s a 12-second improvement from her previous best of 2:38.72 in 2018. Pilato was the 2019 World Championships silver medalist in the 50 breaststroke at just 14 years old, but with that not an Olympic event she’s been working on improving her endurance toward Tokyo. Given that her underwaters are a relatively-weak part of her race, those big drops in short course (with more turns) are an especially-good sign. Her long course best in the 200 breast is a 2:56.86.

One of Pilato’s primary competitors, Arianna Castiglioni, swam the 100 breaststroke in long course in Lodi, where she marked a 1:06.55: just .16 seconds short of her lifetime best from the 2019 World Championships. That’s the #1 time in the world during the 2021 calendar year and the 3rd-ranked time of the season behind only December swims of 1:06.02 from Pilato and 1:06.40 from China’s Tang Qianting.

Italy now boasts 3 of the top 4 breaststrokers in the world this season: Martina Carraro ranks 4th in 1:06.58.

Castiglioni also swam the 50 breastsatroke, marking at ime of 30.70.

Other Results from Italian Olympic Hopefuls:

How is that even possible.

Called flying and dying or not enough endurance.

Nope. Just was pure-speed until recently.