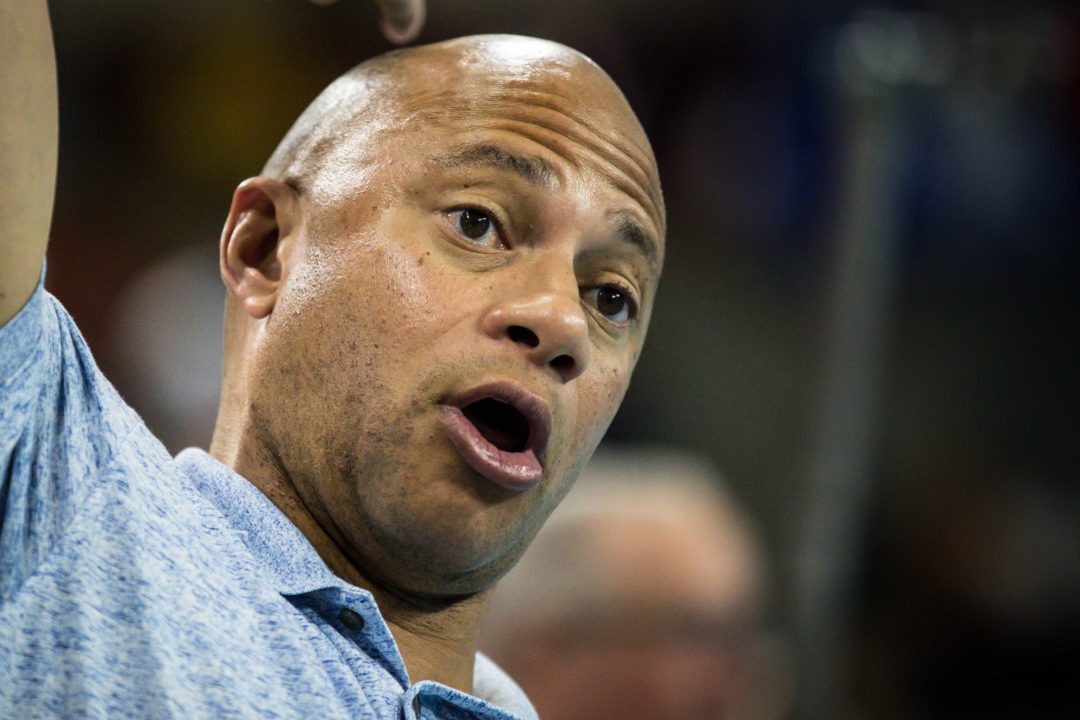 Anthony Nesty is breaking barriers both as a Black coach and as an athlete, rising to the top of the global coaching pyramid. Archive photo via Jack Spitser/Spitser Photography

When Anthony Nesty was named the head coach of the men’s team for the 2022 Budapest World Championships, he made history in multiple ways.

The most culturally significant is that he becomes the first Black swim coach to lead a U.S. team into the World Championships*.

*Editor’s note: USA Swimming can confirm this to be true at least as far back as they have existed, which is 1980. There were three editions of the World Championships prior to that, and none of the head coaches of record at those meets were Black. There were previous meets that were identified as “World Championship” events, but they are not recognized by FINA as World Championhips.

Nesty’s selection was no affirmative action pick either: he, along with Todd DeSorbo, who is leading the women’s team to Budapest, is one of the two most on-fire coaches in the country right now, and is arguably at the top of the global food chain as well.

Since the Olympics, the United States’ two most-decorated swimmers in Tokyo have joined Nesty’s group: Caeleb Dressel, who was training previously in the same pool but under former Florida head coach Gregg Troy; and Katie Ledecky, who made the post-Tokyo move from Stanford where she trained under Greg Meehan.

In total, those four swimmers have a combined 16 Olympic gold medals and 20 total Olympic medals. Throw in a bronze by Natalie Hinds, who was training at Georgia pre-Tokyo but has also now joined the Gators post-grad group, and the Nesty-lead staff is now the epicenter of the swimming universe, at least in the Western Hemisphere.

He has broken barriers before: that 1988 Olympic gold medal made him the first Black male athlete to win an individual Olympic medal.

That’s not the only barrier that Nesty is breaking by this selection.

Almost all of the 10 coaches officially on the American coaching staff at the Tokyo 2020 Olympics, for example, were competitive swimmers of some repute. Teri McKeever was a 10-time All-American at USC. Jack Bauerle was a school record breaker at Georgia, where he’s now the head coach. Ray Looze was 3rd at the Olympic Trials. Greg Meehan won some MAAC conference titles on relays at Rider University. Todd DeSorbo was the CAA Swimmer of the Championships in 1999 at UNCW. Dave Durden was the 1997 Big West Conference champion in the 200 fly. Peter Andrew was a national-level swimmer in South Africa.

Gregg Troy and Bob Bowman are the only two who don’t list any of their own athletic accomplishments in any of their official bios. Bowman was a conference-level swimmer at Florida State.

Nesty, though, is one of the few individuals in history to have both won an Olympic gold medal and to have coached an Olympic gold medalist. At a minimum, we couldn’t think of any other American coaches who have done so. Some have come very close (George Breen, for example).

Does this stuff really matter? Whether, it’s a job as a coach or anything else, I don’t care if the person is a man, a woman, white, black,blue, Christian, Muslim, whatever. Is the person very good at the job? That’s all that matters. First, 100th, one millionth — don’t care.

For other coaches of color it absolutely matters, once there is a first there can be a next.

My childhood hero and the reason I took swimming seriously.

I’m pretty sure you can count Karen Moe (1972 gold medalist in the 200 fly) because she was the head women’s coach at Cal from 78-92, and at the very least, that would have been during the time Mary T swam there.

I remember Anthony from LA & noted there must be a good swim base in Surinam after Annelies Maas break out . I thought then the Caribbean should be a successful swim region in its own but not if everyone gets poached .

Side note – I watch Belair and was really frustrated by how swimming was shown. One of the main characters is a black girl swimming in scholarship for the fancy school who is going to Olympic trials. The problem 1. The swim practice isn’t realistic. Since there is no one else there and she only swims two laps. 2
The actress can’t actually do a real start or swim at level past red cross lessons.

Could they not find an someone to do the swimming parts for her or get some local LA team to be extras for the practice???

You’d think they could just go down to USC, UCLA, etc, and say “who wants $200 to make some swimming B-roll?” A swimmer could maybe even get a “stunt double” credit – with a cap, you only have to be vaguely the same skin tone/body type.

Or even – hi who wants to be in a big show produced by Will Smith? We need 20 people. And cast for a black actress with swimming experience (just your high school team will do) to stunt double

Are there any non-American coaches who have coached a gold medalist but also won a gold medal? Just wondering. Can’t think of any just now.

I haven’t been able to come up with any, and nobody proposed one in the comments that fit the bill.

i can think of sergio lopez but he neither won gold (bronze), nor did he coach schooling when he won gold.
he did coach him before and after tho i think

Sergio Lopez coached quite a few gold medalists but “only” won a bronze I guess.

He doesn’t quite fit the bill, but Marcel Wouda won a World’s gold (in fact, the Netherlands first) in 1998 (and Olympic bronze in 2000, plus swam – I think – 2 WRs) and coached Maarten van der Weijden and Ferry Weertman (both olympic golds), and coached Femke Heemskerk and Ranomi Kromowidjojo at some point (I’d have to check on timing – but he definitely didn’t coach either when they won their respective olympic medals)

Much respect for this guy.