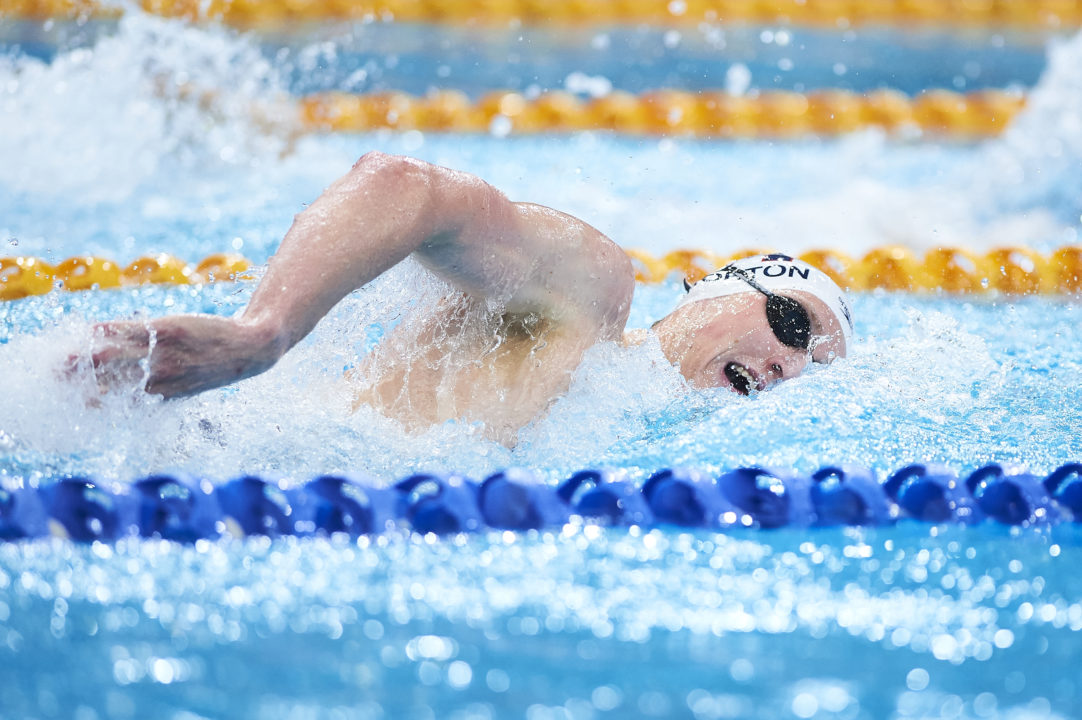 Mack Horton was relegated to 3rd place in the men's 400m free at Aussie trials, meaning the man will not be defending his gold medal from Rio in this event. Archive photo via Jaimi Joy, www.jaimijoy.com

Day 1 of the Swimming Australia Olympic Trials wrapped up today in South Australia with a handful of swimmers’ names being etched onto the roster for Tokyo, Japan.

Among them were Elijah Winnington and Jack McLoughlin, the pair who finished 1-2 in the men’s hotly-contested 400m freestyle event. St. Peters Western’s Winnington powered his way to the wall in a big-time 3:42.65 for his first outing ever under 3:43, while veteran McLoughlin snagged silver in 3:43.27, also scoring a new best time.

This means that the reigning Olympic champion in the event Mack Horton was shut out, being rendered to 3rd place in a final result of 3:43.92. His time easily dipped under the Swimming Australia-mandated qualification time of 3:46.34, however, the 25-year-old Melbourne Vicentre will instead watch this race from the sidelines.

Horton’s time here ranks as the 8th fastest of his career, with his resume boasting a lifetime best of 3:41.55 at the 2016 Olympic Games. In fact, the top 4 finishers in this Trials would have all landed in that Rio final, with 19-year-old Tommy Neill logging a swift 3:44.51 for 4th place.

Entering this meet, Horton was seen as a question mark, with our meet preview detailing how the man hadn’t been under 3:50 since 2019 in this event.

On his performance today, Horton said, “I was just on the wrong side of the pool, breathing the wrong way, I literally gave it everything,” according to the Sydney Morning Herald. “Every time you turn in the 300m, you always question if there is another 100m in there. That was the same today, clearly not enough.”

Horton continued, “Very happy for the boys. Jack works his arse off, and he’s been working his arse off for years and Elijah’s obviously super talented and coming up through it, so hopefully they can keep creating the 400 legacy for Australia.”

There was some speculation that Horton wasn’t entirely rested for this meet, but we have not been able to confirm this. He still can try and qualify individually in the 200m free or as a relay swimmer for the 800m free relay, and has entries in the 800 and 100 freestyles individually as well.

As for Winnington, the Dean Boxall–trained ‘animal’ said post-race, “I had a little moment with Mack … and I pretty much told him that he’s my hero.”

“It’s going to be a competition and I know that if you make it in the team in the 400 in Australia you are very much in contention for an Olympic medal, let alone an Olympic gold,” he said.

“So, I’m going to be doing everything and that’s sort of my focus now I’ve made the team and now my shift is to improve on that and see what I can do for Australia.” (ABC)

As for just how excited coach and mentor Boxall was with his protege, the embedded video excerpted from the Amazon Prime live stream should give you some idea.

Lmao Dean . Remember AT said he talks to her & says things that the boys in the squad can’t take.

Looks like Elijah can handle it too. BTW both coaches are Saffas.

A British term for the many successful South African expats . Now our DEANO is up there with the famous Saffas like Princess Charlene!
.

Australia is a clear favorite for gold in 4×400 relay

As someone else also pointed out they’d also be favourite in the 8 x 4 mixed, and maybe the 4 x 4 mixed…

The seventh lap decided the race.

Horton split 28.92 and fell behind the other two. Then he couldn’t catch them down the stretch.

The 200 is his better chance. It looks like his endurance is off.

Mack protesting Yang by not swimming the 400. Bold move! /j

Love the hype from Dean Boxall

Crazy. I don’t think the US will match this depth tomorrow but I think we’ll see at least 2 in the 3:43-4 range.

Don’t think he’d be seeing performance degrade yet at 29, so he’ll still be competitive, but I agree that he’s unlikely to see sudden large improvements. The momentum is with the younger guys here, they know roughly what kind of ceiling to expect from him. If he does swim poorly, it won’t be because he’s 29.