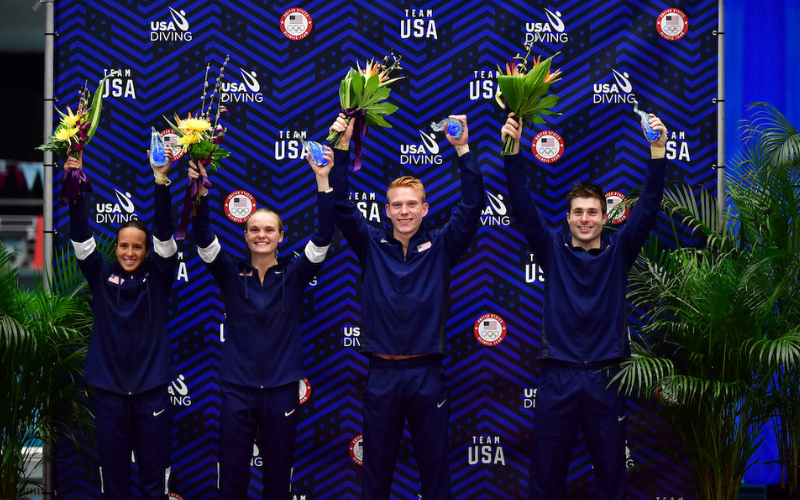 Hixon and Capobianco entered the finals with a sizable lead after winning both the preliminary and semifinal rounds. This lead did not stop them from continually hitting the mark dive-after-dive. Hixon and Capobianco capped off their stellar list with a Forward 4 1/2 Somersault Tuck, earning 90.6 points on the 3.8 degree of difficulty dive.

Parratto and Schnell also began the final round of dives with a slight lead after ending prelims one point behind competitors, Katrina Young and Murphy Bromberg but by the end of the semifinals later that way they had surpassed Young and Bromber to come into today’s competition with a 23 point advantage. Throughout the competition, they remained consistent, their best dive being their Forward 3 1/2 Somersault Pike, which earned them 75.60 points.

Diving with Delaney
“We dove together in 2019, and we were the second-best pairing back then. So made the decision since Delaney’s synchro partner dropped out because of injury, we went together last minute.”

When asked what her favorite part of the diving community is:
“We have been competing and friends for years since we were young. I just love that type of culture; we all come together.”

Being named an Olympian
“Honestly, it hasn’t hit me yet, I said this before, but it doesn’t feel real yet. It’s a lifelong dream of mine first with gymnastics and then diving. It’s crazy to say that I finally done it.

On how they trained together despite the location difference given the short window of time:
“Me and Dwight decided to leave for Indiana a week and a half early. So I was out training with Jessica 10 days before we came to Olympic Trials, and it was a really good decision since I had a longer time to adjust to the time change and get adjusted to the environment.

Biggest hurdle diving as synchro partners
“When I came to IU, Drew kind to model my diving around Michael’s a little bit, so when we did come together for synchro the timing was actually pretty good already. The biggest thing was learning how to dive synchro. I never done synchro in the past and coming in with your synchro partner being a silver medalist from the last Olympics was pretty crazy; he took me under his wing, and it’s been pretty special.”

When asked if competing at the World Cup was a good warm up for this event:
“This whole progression was a set of steps goes to the World Cup then goes to the Olympic Trials then Olympic Games. Step 2 and 3 done, and now one more to go.”

Making two straight Olympics
“I think it says a lot about my support system, including both my synchro partners. I feel like I am the bridge with two great divers. Along with my coaches Mike Hilde and Drew Johansen and family, I can’t thank those people enough.”

Finals continue tomorrow with the Women’s 3-Meter Individual at 4:50pm EST followed by the Men’s 10-Meter Platform Final at 7:35pm. Both events will be broadcast live on NBC.

Three out of those four divers are from Indiana University! We love the Hoosier divers…they ROCK!

D schnell is a U of Arizona diver. Her boyfriend is a lifeguard at a rec pool where I do workouts at.