Americans Andrew Seliskar and Sierra Schmidt were named the official Swimmers of the Meet at the 2014 Junior Pan Pac Championships, capping... Current photo via Melissa Lundie 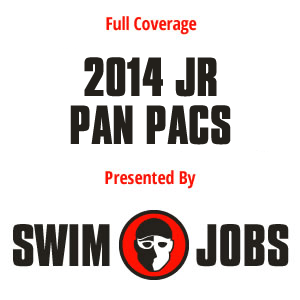 See below, most of the race videos for day 4 of the 2014 Junior Pan Pac Championships in Maui, Hawaii….

The awards were given on the strength of the fastest single swim, with preference given to those swims that broke individual World Junior Records.

Seliskar got the boys’ award on the strength of his 200 fly, which was worth 890 FINA Points and broke the World Junior Record in the event. He swam a 1:55.92 in the event on the first day of the meet to win by almost two-and-a-half seconds.

She also picked up a win later in the meet in the 1500 free. Schmidt will be eligible to swim this meet again in two years, presuming she doesn’t make a senior-level international team by then.

Issues with FINA Points aside (http://swimswam.com/fina-points-illogical-impractical/; though I now retract “swimswam points” and advocate for the International Points System (IPS) which solves all of the problems I pointed out and it much more elaborate than what I could have hoped to make myself), using a senior metric to judge junior swims is a little unfair. Generally, to be competitive at the 50 or 100 you have to be at least in your young 20s, and it’s rare for anyone younger than 19 to be really that highly ranked. So compared to junior swimmers, it’s harder for a young person to move up through the ranks in the 50 free (where you need power, and indirectly physical maturity) than it is… Read more »

What would you think of Junior FINA points based on the Junior World Records?

Logical choices.
Sierra Schmidt has been incredibly consistent since the US juniors. Here’s one swimmer who has improved a lot at NBAC.
Seliskar’s 200 fly was the performance of the meet in my opinion.
Too bad he hasn’t qualified for the world championships next year. He was very close. It would have been a first great international senior experience.
I’m sure it will motivate him a lot to train still harder and I predict he will be the man to beat at the olympic trials in 2016 in the 200 fly.

Bobo, I am really annoyed that Kalisz got the #3 spot over Seliskar at Nationals, then didn’t even swim in the 200 fly final despite having qualified for it! That experience might have been invaluable for Andrew! His 200 fly JWR swim has raised him to the world #11 ranking, and is very close to Clary’s bronze medal time from Pan Pac’s! Although it is unlikely he could have beaten Clary to make the World Team, the experience of having competed in a Pan Pac A Final might have really helped him deal with the pressure if he ends up in Rio!

He will probably selected for Pan American meet.

Vote Up00Vote Down Reply
No Idea