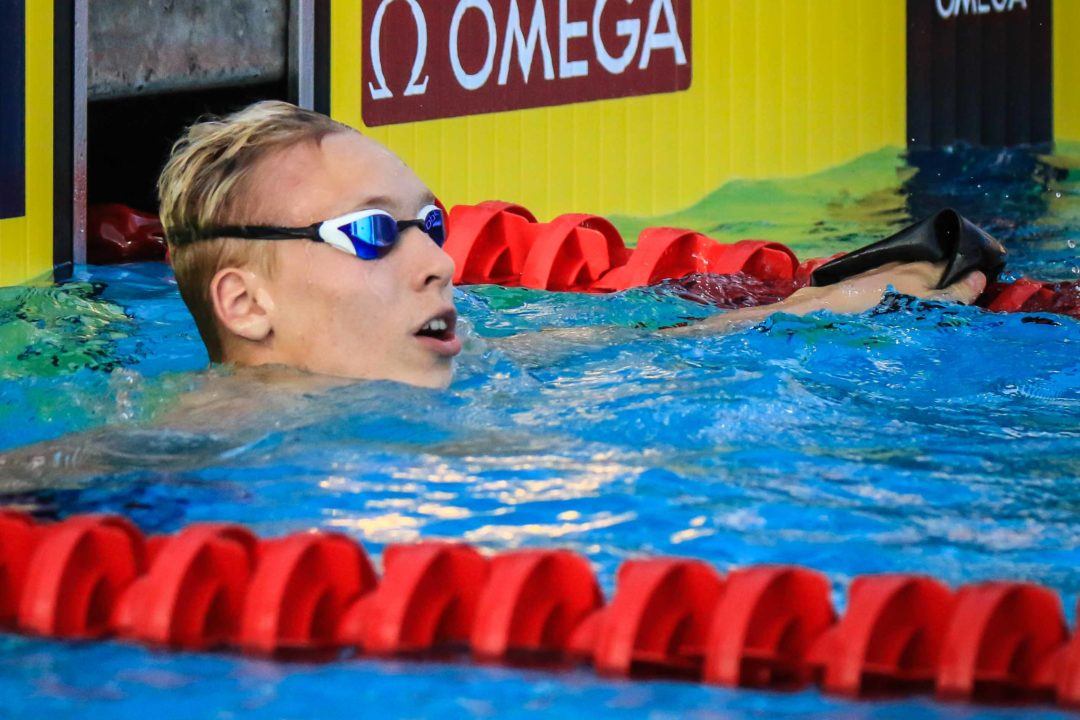 Andrei Minakov is just the fourth man to break 44 seconds in the 100 fly, joining the likes of Caeleb Dressel, Tom Shields, and Joseph Schooling. Archive photo via Jack Spitser/Spitser Photography

After Stanford freshman Andrei Minakov broke the Pac-12 meet record and freshman record this morning in the prelims of the Pac-12 conference championships, he threw down a time of 43.90 in finals to win by over a second, taking down the conference record and his own freshman record in the process. In addition, he joins Caeleb Dressel, Tom Shields, and Joseph Schooling as the only men who have broken 44 seconds in the event, and is the first to do so since Dressel in 2018.

Minakov’s swim makes him the fourth fastest 100 flyer of all time and the fastest in the NCAA this season, surpassing Youssef Ramadan‘s 44.08 from ACCs two weeks ago.

In one day, Minakov has dropped nearly a second off his his personal best, which sat at a 44.78 before this meet from mid-season. He split 20.38/23.56 this race compared to the 20.65/24.13 he split at the NC State Invitational in November, showing improvements in both his front and back half of the race.

Additionally, Minakov split a 19.49 on fly during the opening night of the championships to help Stanford capture the conference title in the 200 medley relay, which was the third-fastest 50 fly relay split of all time. He also finished second in the 50 free in a time of 19.08.

Arizona State’s Alexander Colson dropped exactly a second off of his best time of 46.02 pre-Pac 12s to finished behind Minakov (45.02), and Colson’s teammate Cody Bybee was third (45.32).

swimswam- is there a list of “freshman” NCAA records? I can’t seem to find one.

I think he’s got more in him. His long course is consistently smoking fast and his walls are outstanding. Transitioning from scm to scy takes a little longer on the sprints, since so much of the race happens underwater. Excited to see what he can do at the big dance