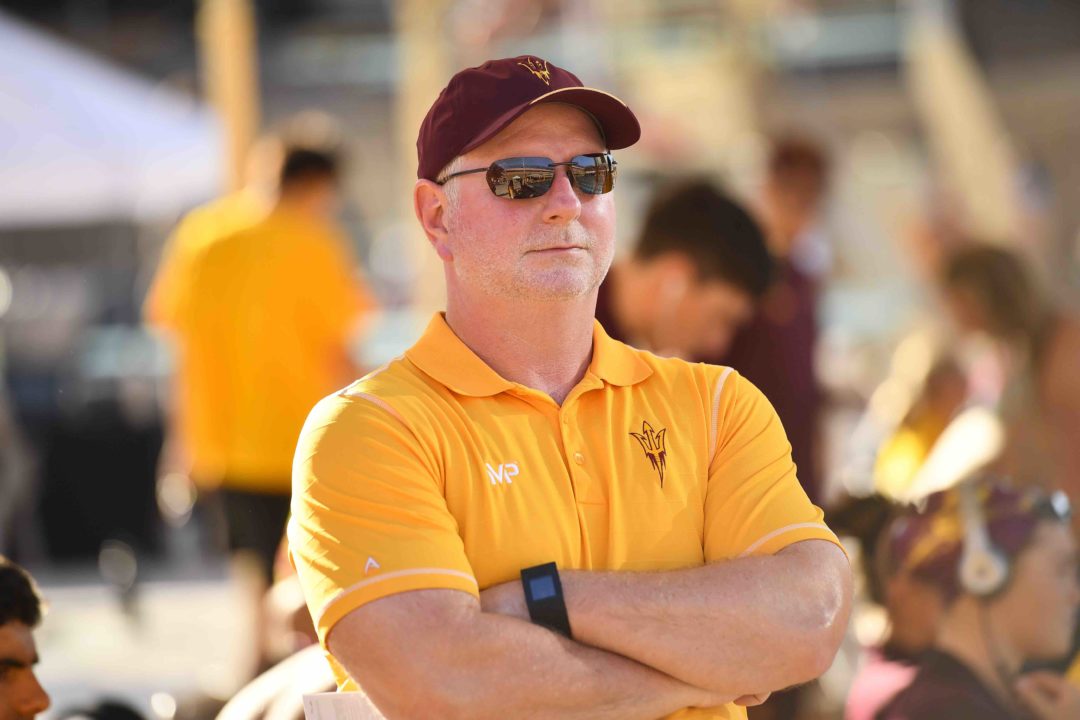 Arizona State sprinting has come a long way in 7 seasons under head coach Bob Bowman, and even further from where they were 10 years ago. Archive photo via Sun Devil Athletics

When Bob Bowman took over the Arizona State Sun Devils for the 2015-2016 season, pressure was high. Seven seasons later, the men’s team, at least, is seeing the payoff of those expectations.

The Arizona State program was well past its best, with the men’s team having come off a scoreless NCAA Championship meet and the women’s team having scored only 15 diving points at the previous year’s event.

Bowman at the time was arguably the most famous swim coaches in the world, bringing his best-known protegee Michael Phelps with him to Tempe to train for the final stretch to the Rio Olympics.

Within swimming circles, Bowman and Phelps’ time at the University of Michigan from 2004 through 2008 is often remembered as a flop, but the data doesn’t really show that. In 2003, Michigan was 9th at the NCAA Championships. In 2004, the year before Bowman arrived, Michigan was 5th at the NCAA Championships. At his four NCAA Championships meets, the Wolverines finished 6th, 8th, 7th, and 6th. Aside from 2004, it had been since 1996 that the Wolverines had been better than 6th at NCAAs, so Bowman’s results there were in line, if not slightly better, than most of the tail end of Jon Urbanchek’s time in Ann Arbor.

The results maybe weren’t as good as many might have hoped with Michael Phelps in the pool (albeit not on the varsity squad), but they were still good.

But back at the NCAA level at Arizona State, a program with some history but nowhere near the level of that at Michigan, Bowman is really figuring collegiate swimming out.

After redshirting his entire team last season because of the uncertainty of COVID-19, Bowman’s Sun Devil men are now seeded to finish in the top 5 at the NCAA Championship meet in March. The team’s best-ever finish is 6th place in 1982.

Bowman’s success has come in some obvious spots – including with French freshman Leon Marchand, already verging on stardom before arriving in the U.S. Bowman knows how to train this kind of swimmer, an IMer and 200 yard specialist, because those are the races that Michael Phelps swam so well.

At the conclusion of this weekend’s Pac-12 Championship meet, where Arizona State finished 3rd and was battling with the traditional powers at Cal and Stanford throughout, Bowman posted on his social media accounts a stat showing the progression of the team’s 400 free relays over the last 10 seasons.

That chart culminates with Arizona State’s 2:45.95 from Saturday, which ranks them 5th all-time among NCAA program records. They had two relays, in fact, under the NCAA Automatic Qualifying Standard, showing that it is flash and depth that guides the modern incarnation of the Sun Devils.

While the times did begin to improve before Bowman, the drops into the really-difficult sub-2:50s came after Bowman. The program’s sprint group really turned a corner in the 2018-2019 season, when Herbie Behm, a program alumnus, returned as an assistant coach and began working with the sprint group.

Behm has become somewhat of a cult hero in swim coaching circles due to his frequent and insightful Tweets about coaching beyond what most coaches share so freely in the public eye. He will likely get head coaching offers in the next few years, given the success of the spring group in Tempe.

But the group also benefitted from the undeniable recruiting draw of Bowman and Phelps. 2019, where they lurched forward back under 2:50, was the sophomore season of a big recruiting class that included Grant House (who is still around as a redshirt senior). A year later, Cody Bybee, who swam 43 in high school, hit his stride as a sophomore. Jack Dolan, who also swam 43 seconds in high school and was the #3 recruit in the class of 2019, also hit the ground running upon arrival.

Now the Sun Devils have a quartet of 42 second freestylers, including Bybee (42.3 on a flat-start on the “B”) who can’t even crack the “A” relay. Marchand, the IMer, further showed his Phelpsian skillset by splitting 41.26 on that relay’s anchor, which was the team’s best split on the relay.

Even the vaunted Cal Golden Bears couldn’t boast four 41s on their relay.

The next hurdle for the Sun Devils will be to put their best performance together at the NCAA Championships. That’s not a spot they excelled in Bowman’s early years with the program (they were -51 points versus seed at the 2017 NCAAs), but in their last two NCAA Championship meets performed better: +2 in 2018 and +11 in 2019.

Now with two years away from the NCAA Championships (one by cancellation, one by Bowman’s choice), the expectations have risen to a new level and for very different reasons. It feels like this program, that was improving pre-pandemic, has some pent-up performance waiting to be unleashed.

Bowman took over an Arizona State program without the expectation of history that Michigan had, though he still carried the personal pressure that accompanies his own reputation. Pressure for future success can be driven by both past failures and past successes, but the pressure to continue to rise and live up to expectations is what makes college swimming fun.

To be fair, ASU didnt really have a men’s team 10 years ago. They got de-funded/cut/whatever during university budget cuts and their first years back were not really on par with the rest of their athletics teams.

How many years until Herbie Behm gets a head coaching position? His sprinters are on fire

Maybe he stays until Bob leaves, Herbie seems to love the program. Bob isn’t necessarily young, but by Eddie means…

Herbie is brilliant..one of the truly great young coaches

Meh, maybe. Honestly feel like they’ll need to dog fight it out like NC State has been doing for the last few years to break into the top 3. Obviously swimming fast gets fast recruits, but the draw of Cal and Texas in terms of academics is undeniable. Have to work twice as hard to overcome that advantage.

Can someone please remind me what the advantage of redshirting the full team was (given I thought everyone got an extra covid year of eigibility anyway)?

Did they know about the extra year of eligibility or did the red shirt decision come before the NCAA made that call?

I don’t think the NCAA came out and said there would be an extra year of eligibility when ASU made their decision to red shirt.

the redshirt decision came before the ncaa gave all sports an extra season. however, it was most certainly a great decision

How was it a “great decision”? You can make the argument that *at the time* it was a reasonable choice to make sure they didn’t burn another season of eligibility without a guaranteed NCAA meet. But as it turned out – they would have gotten another NCAA meet and NOT even used any eligibility for it. Does it seem to be working for them NOW? Yes. But skipping a season so that you can train through and have a great season the following year is not really how collegiate athletics is set up.

What’s the difference scholarship cap wise between the red shirting approach and the 5th year of eligibility approach?

I believe he did it bc we didn’t know if they’d even have a full season or NCAA meet AND he could focus on training LCM for trials etc. it was def a gamble and maybe he knew Marchand was coming already so it would benefit the team as a whole the following year.

Any insights on progress at the University of Arizona?

I always thought it was weird when people talked about Bowman’s time at Michigan being a flop.

It is true they didn’t start immediately winning NCAAs , but they were very good, in line with how good had been in recent years with Urbanchek. And they had numerous Olympic level swimmers there during that time.

Probably the main critique I would give is that he wasn’t there that long, only 4 years.

And consider if Phelps would have been able to actually compete at Michigan as a NCAA swimmer. They probably would have vaulted into a top 3 program on his points alone.

Is it a rule that there can only be one top team in the state of Arizona at any given time?