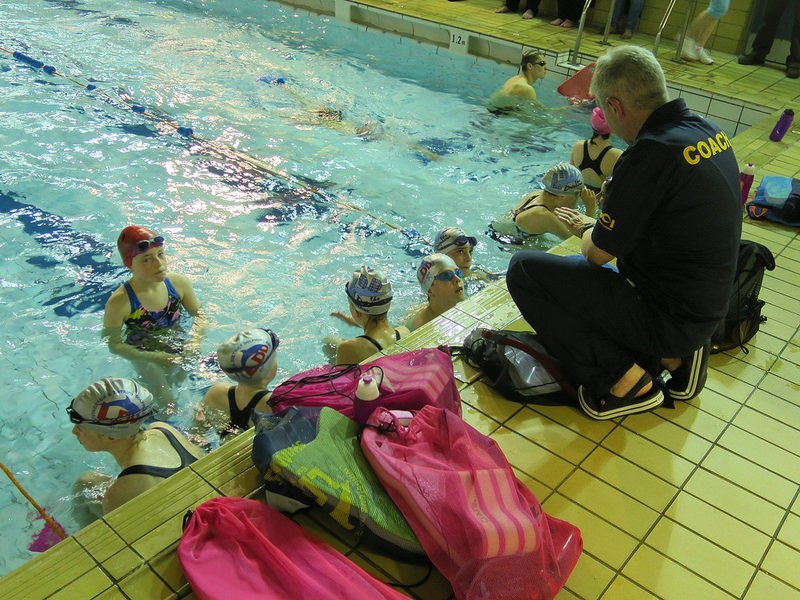 Thomas South is an Age Group Coach working for the Foothills Stingrays Swim Club near Calgary Alberta. He shared his thoughts with us on goal setting with age group swimmers. Stock photo via Scottish Swimming

Thanks to Foothills Stingrays coach Thomas Smith for contributing this story:

Hello everyone,
I wanted to take a moment and share with you an observation that I have made over the past eleven seasons as a coach.

This idea will probably seem counter-intuitive when you think about it, and some of you may reject this idea initially, but over the years I have coached a few hundred swimmers and seen that this actually does hold true. The concept has to do with goal setting.

I find that it is too natural and too easy for an athlete, a coach, and a parent to focus on things such as qualifying times and rankings. I, myself, don’t feel as though I have achieved a good balance of celebrating these types of achievements, encouraging swimmers to improve on them, but keeping the focus on simply getting better.

Why swimmers can’t control rankings/medals is easier to understand. They have no way to impact how fast another swimmer goes, they only have control over themselves in this situation. Having a goal of getting a medal or making a final is at least as dependent on how fast the competitors are as how fast the individual athlete goes. Take, for example, coming third place at American Olympic Trials. This swimmer would likely make the Olympic team in any other country, but based on the strength of that country in the sport of swimming and on the fact that a country may only send two athletes per event, that person does not make the team, yet is still a world class swimmer.

Qualifying times function in a similar way, but it is harder to understand how they are difficult to control. First of all, they are dependent on an average of a group of swimmers’ performance over a set period of time (this is how they determine the times), which means that they are comparing themselves to others in simply shooting for the time. More importantly, they are an external time on which swimmers will judge themselves. They become aware of who has the time and who does not and they will feel unsuccessful because of this.

Also, even if they take off a ton of time, they will quite often say that they are unsuccessful because they did not reach that qualifying time when the fact is quite the opposite. I have seen time and time again that a swimmer will get close to a particular time but begin to stress about the fact that they may not get it, that another person has it and they are worried about being worse than that person, or that they have missed the time previously. This often leads to poorer performance and quite often an athlete will sit a second or two short of the qualifying time for a very long time even when everything else is actually improving.

It may make sense in an athlete’s, coach’s, or parent’s mind to set that qualifying time as a target, and in the back of my mind I have, but that is only because I know that even if all swimmers don’t make it, then it is not a failure on my part (especially since it was a very lofty goal to begin with). Most of the time athletes need to learn this, and most of the time they are too young to fully grasp it initially (they are still figuring out how to define themselves).

In swimming, all we can control is the execution of the skills and of the tactics. As long as these things improve, then the race will improve, and as long as the race improves, then so will the time, and if the time is improving then qualifying times will happen as a consequence and without even thinking about them.

It is difficult to characterize success in this sport because we live and die by the clock. At a young age, a swimmer will improve their time even without a coach on the pool deck because they are growing and getting stronger. When the swimmer is done growing, it is not unusual to have a swimmer achieve best times only twice a year (at tapered meets). So even time is problematic to judge success on.

There are so many factors that go into success, and so many micro components that determine the outcome. The position that a swimmer is in when they touch the wall to finish the race can add or subtract hundredths or tenths of a second from their time and thus can determine achieving a qualifying time or not. So it becomes imperative that we look at the aggregate of the performance and ask ourselves if it got better. As athletes and coaches, if this answer is not, then it is our job to make sure that we come up with an action plan.

Another thing that I would like to point out is that performance is not an immediate thing. I know for a fact that if I would have pushed the kids harder physically this year then they would be faster. However, there would be shoulder and knee injuries, far more sickness, and their stroke would suffer. I know that these swimmers take an average of 20 strokes per 25, so in a 100 they take 80 strokes, so in a practice they take 800 strokes, and in a week this becomes 4000, 16000 over the course of the month, and roughly 160000 over the course of the season (probably more, in fact).

This means that the neuropathways and motor system of the kids could get really good at doing things correctly or they could get really efficient at doing things poorly (this is why it is so hard to change an older swimmer’s strokes). So our eye in the Leopard Rays group has been long term success at the senior and university levels (not to say that we didn’t have our share of short term successes).

There was a time when I was completely against extrinsic rewards of any kind like medals, or awards, or other things. I was of the opinion that it takes self-motivation or intrinsic motivation to truly excel. I am still of this opinion, but I have since learned that it takes extrinisic reward to build intrinsic motivation. So this becomes a very complicated subject.
In short: please encourage your swimmer to focus on doing things well, on improving skills, and on having fun and not on rankings, not on qualifying standards, and not just on personal bests. Certainly celebrate these last things, because that will help affirm the swimmer and keep them wanting to participate in the sport. They do, however, make for problematic goals and worse indicators of success.
I hope that this helps and that this was at least somewhat clear. It has taken me all eleven coaching years to come to this conclusion, but it is something on which I base my entire swimming philosophy; it is what has allowed me to coach Alberta Age Group Championship and Alberta Age Group Trials qualifiers and winners, Canadian Age Group National qualifiers and finalists, as well as multiple Alberta provincial record holders. So, please take this to heart as I would like your swimmers to continue to follow in their footsteps.

Thank-you all for a great season to this point.
I will see you in Red Deer,
Tom

Thomas South is an Age Group Coach working for the Foothills Stingrays Swim Club near Calgary Alberta. He is a High School English Language Arts teacher in addition to having coached the sport of swimming for the past eleven seasons.

Over this time he has coached a large number of provincial medal, national finalist, and provincial record breaking swims.  He has also been a part of a coaching staff that has won eight Provincial Age Group Championship banners in the medium team category over the past eight seasons.

Three goals to achieve every day and every season:

Have fun (enjoy the journey)
Stay healthy (good form, nutrition, recovery, rest, and hydration)
Be positive (encourage your friends, teammates, and competitors, and appreciate how they make you better)

These sound simple enough but aren’t always easy to accomplish on a daily basis. All that other stuff (cut times, medals, trophies) either happens or it doesn’t, but if you focus on the big things (fun, health, positivity) then enough of those little things eventually happen along the way – and it’s the big things, not the little things, that keep people motivated in the long run.