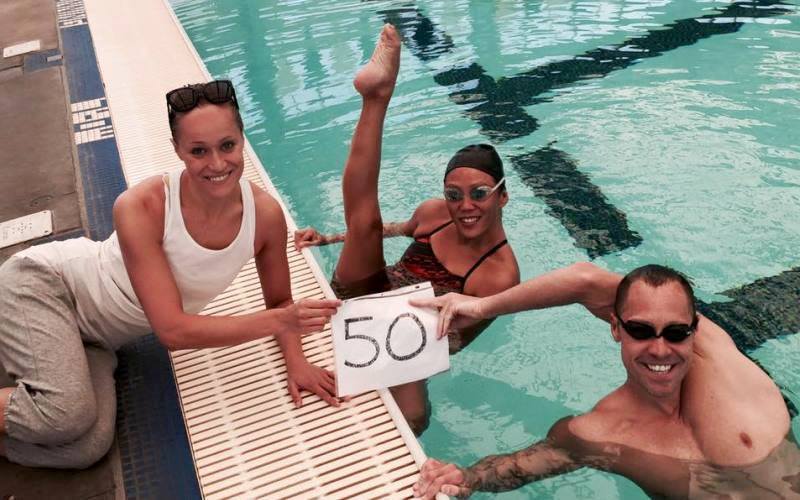 May, once barred from competing at international events because of his gender, and former Olympians Christina Jones and Kristina Lum Underwood are USA Synchro's official selections for the inaugural mixed duet at the World Championships in Kazan, Russia. Current photo via USA Synchro

INDIANAPOLIS – Bill May is ready to make history at the 2015 FINA World Championships.

May, once barred from competing at international events because of his gender, and former Olympians Christina Jones and Kristina Lum Underwood are USA Synchro’s official selections for the inaugural mixed duet at the World Championships in Kazan, Russia, July 24-August 9.

The swimmers advanced after a second phase of trials in Las Vegas last weekend.

“The last phase of our trials went great. It was an amazing opportunity to show our routines to the judges and the national team director, Myriam Glez,” May said. “We received a lot of positive feedback that will help improve our routines and take our performance to the next level.

“Now, with all of us officially named to the World Championships Team we can focus on one thing: perfecting our routines and being the most incredible athletes we can be. We are excited to show the world just how beautiful, athletic and entertaining a mixed duet truly is.”

May and Jones, a 2008 Olympian, will compete in the technical routine, which will be heldJuly 25-26. Underwood, who competed at the 2000 Olympics and is a four-time national duet champion with May, will swim the free routine with him on July 28, with the final onJuly 30.

“Their routines are strong with good content and rhythm,” said U.S. National Team coach Myriam Glez. “The technical duet is really interesting and catchy, and the free duet is intense and powerful.”

May won 14 U.S. national championships and several international titles during his synchronized swimming career. A trailblazer in a predominantly all-woman sport, he became the first male to win a national title in the U.S. and was named USA Synchro’s Athlete of the Year in 1998 and 1999. He added numerous duet titles and won a silver medal with Kristina Lum at the Goodwill Games in 1998. May was inducted into the U.S. Synchronized Swimming Hall of Fame in 2012.

He is currently a synchronized swimming performer in Cirque du Soleil’s “O” show on the Las Vegas Strip. (Read more about May here.)

Jones, who also performs in Cirque du Soleil’s “O” show, competed at the 2008 Olympic Games in duet and team and represented the USA as a soloist for several years.

Lum Underwood is a synchronized swimmer and team captain in “Le Reve – The Dream,” an aquatic and aerial production show at Wynn Las Vegas. In addition to her four national duet titles with May, the pair won the silver medal at the 1998 Goodwill Games and several addition international titles. Lum Underwood, a member of the U.S. Synchronized Swimming Hall of Fame, was the soloist for the national team for two years.