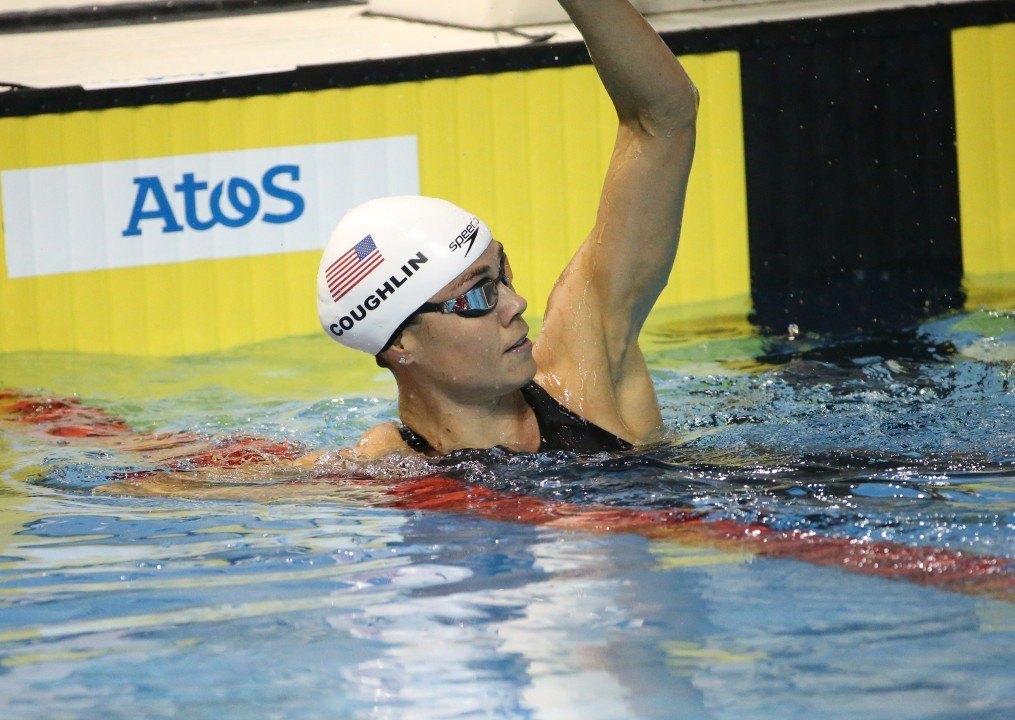 Natalie Coughlin (above) certainly delivered, turning in the 4th-fastest time in the world this year with her 400 medley lead off. Current photo via Chris tanouye/www.christanouye.com

The American quartet of Natalie Coughlin, Katie Meili, Kelsi Worrell, and Allison Schmitt was the first 400 medley relay at a Pan Am Games to break 4:00, and they did so by a long shot, putting up a time of 3:57.35 to take the top seed going into finals by nearly five seconds over Canada.

Coughlin was the most impressive split on this relay, leading off in a new Pan Ams record that ranks her #4 in the world this year. On paper, this relay looked to have been faster with 100 back silver medalist Olivia Smoliga leading off and Coughlin anchoring. Coughlin’s 100 back couldn’t have been predicted 100%, but the U.S. coaches decided to move Coughlin to back and call in Allison Schmitt to anchor, and this move worked out pretty darn well for the Americans.

In finals, Canada will likely be a bit closer to the American contingent, however the middle legs for the U.S. can go faster than what they went this morning. Meili went a 1:05.64 in the 100 breast prelims, nearly a second faster than her split this morning. Worrell, too, was faster in the 100 fly prelims, going 57.24. These were huge new personal bests for Meili and Worrell, who are shaping up to be two of the U.S.’s next big stars. No American has been under 1:06 in the breaststroke since Jessica Hardy won bronze at the 2013 World Championships. Since Dana Vollmer‘s hiatus, Worrell has been the fastest 100 butterflier for the U.S.

Those two were paired with veterans Coughlin and Schmitt for a seriously impressive relay that is looking as though it could be faster than the American relay at Worlds, especially if Meili and Worrell can match or better their best times from earlier in the meet.

Perhaps the 4×100 free relay is still Coughlin’s best chance to make the US Olympic Team in ’16, but this result shows us that the 100 back is still her best individual event and best chance to swim an individual race in Rio. I will be crossing my fingers that she can get back under 59 in time for her OT race. Go Natalie!

Certainly nobody has “nailed down” the 2nd 100back spot over the past few years and this time certainly throws her well into the mix. The issue will be her capacity to back-up one great swim with one of at least similar quality.

What were Coughlin’s splits?

I don’t think Missy will be faster than Simone for the freestyle leg. Maybe Natalie will give Missy a run for the money on the backstroke leg! Missy ‘d better get crackin’!!!!!!!!