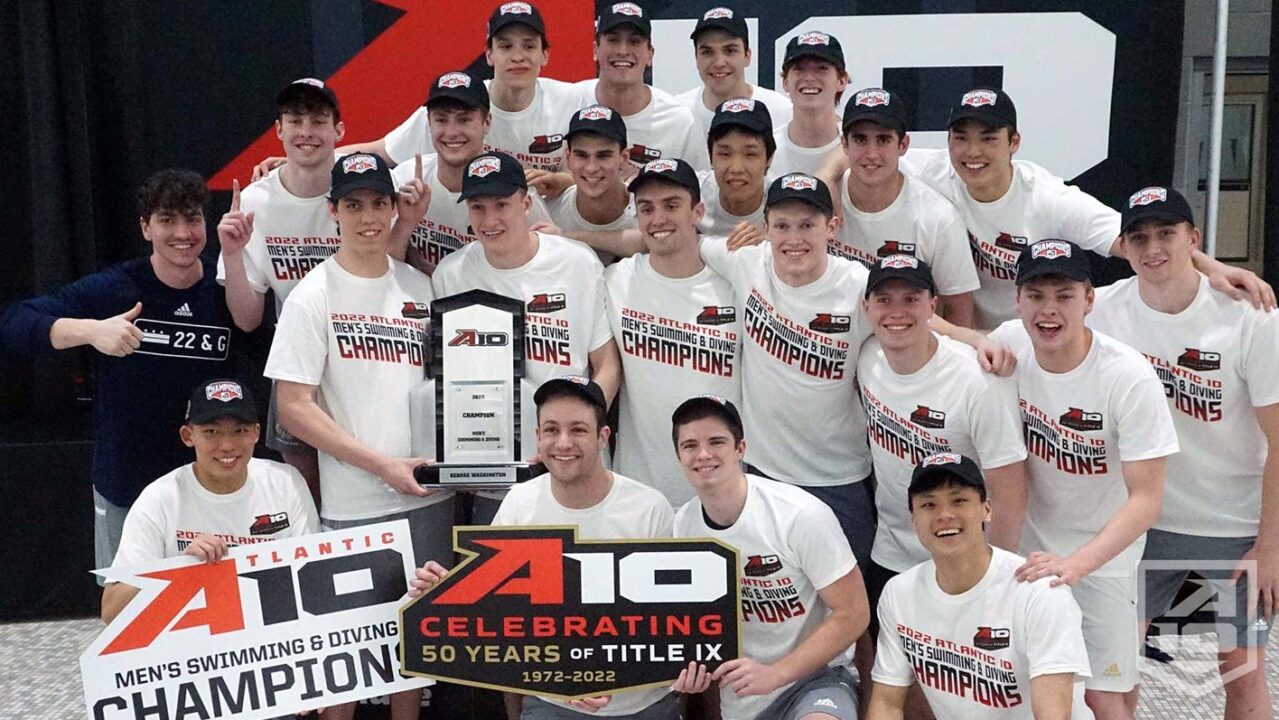 The George Washington men (pictured) have been absolutely dominant during the 2022 A-10 Championships, winning 13 out of 17 contested swim events. Current photo via Atlantic 10 Conference

After four days of racing, both the George Washington men and women took home the title in the 2022 Atlantic 10 Conference Championships. Both teams led following the end of every finals session this meet.

The George Washington men were absolutely dominant throughout the course of the meet, winning 13 out of 17 contested swimming events in the meet. Their championship marks their fifth conference title in six years and their fifth title overall, with their streak of wins only being disrupted by George Mason in 2020.

On the women’s side, George Washington won their second title in three years, as they won their first championship in program history back in 2020. Richmond, the 2021 champions, finished in third.

Ali Tyler went 3 for 3 in her individual races, going a time of 1:55.51 to take the 200 back. George Washington’s Barbara Schaal, who was third in the 100 back, took second place in this race (1:56.54), while Haley Scholer of Duquesne finished third (1:56.71). The event was a sweep of young swimmers, as three podium finishers were freshmen.

Duquesne’s Mendy De Rooi, a fifth-year senior who transferred from the University of the Cumberlands, ended her collegiate career on a high note when she took the conference title in the 100 free after finishing second in the 50 free and 100 fly. De Rooi swam a time of 49.28, ahead of defending champion, Richmond’s Lauren Medlin who was second (49.72) and Davidson’s Abby Francis who was third (49.86).

After she placed eigth in the event at Big Tens while she was at Northwestern last year, Fordham’s Rebecca Kamau got a conference title in the 200 breast. Her time of 2:12.05 was slightly slower than her conferences time last year of 2:11.91, which currently sits as her personal best. 100 breast champion, George Mason’s Jacquee Clabeaux, finished second (2:12.62), and Stine Petersen of George Washington touched third (2:12.90).

Davidson’s Shelby Stanley completed the butterfly sweep for the second year in a row when she won the 200 fly in a time of 1:59.35, slightly faster than the 1:59.59 she swam to win the title last year. Richmond’s Claire O’Shaughnessy was second (2:00.60), and George Washington’s Carli Perry finished third (2:00.99).

A day after winning their first conference relay title in program history, George Mason picked up their second one when they won in the 400 free relay in a time of 3:20.30. Ali Tyler led off in a 48.91 that was fast enough to win the individual 100 free event, before Jacquee Clabeaux (49.78), Shannon Judge (51.32), and Emma De Jong (50.29) finished things off to claim the victory. George Washington was second (3:21.48), and Duqensne had a third-place finish (3:22.00) that included a 49.37 leadoff split from Mendy De Rooi which was the second-fastest in the field behind Tyler.

Marek Osina made it George Washington’s second win of the night when he took the 200 back in a time of 1:42.22, making it his third individual win out of three events. He won the event in a dominant fashion, 3 seconds ahead of second-place finisher Mac Danilewski of St. Bonaventure (1:45.10) and Osina’s teammate, Ryan Patterson, who came in third (1:45.18).

Josh Fletcher of George Mason took the 100 free title in a time of 44.48, despite being slower than the 44.23 he swam last year to take second. He swapped places with defending champion Tyler Kawakami of George Washington, who finished second in a 44.74 compared to his title-winning time of 44.18 from 2021. Davidson’s Ben McClain came in third (44.83).

Dominant performance by GW all around

That’s what a full compliment of scholarship athletes will do.

Women’s team has less scholarships than a lot of the conference, men are not the only team with scholarships, they’re just using them better

Solid financial aid helps. You can save a scholarship to use on another athlete when the school is able to give you a comparable discount. Plus, then your scholarship is based on your grades and not on your athletic performance

Don’t forget good recruiting, excellent coaching and the athletes performing at their best when their best is needed.

Recruiting goes back to having resources Other teams in this conference don’t have the resources to bring in foreign athletes mid year that score 3 a finals. Say what you want but GW has an advantage with its resources