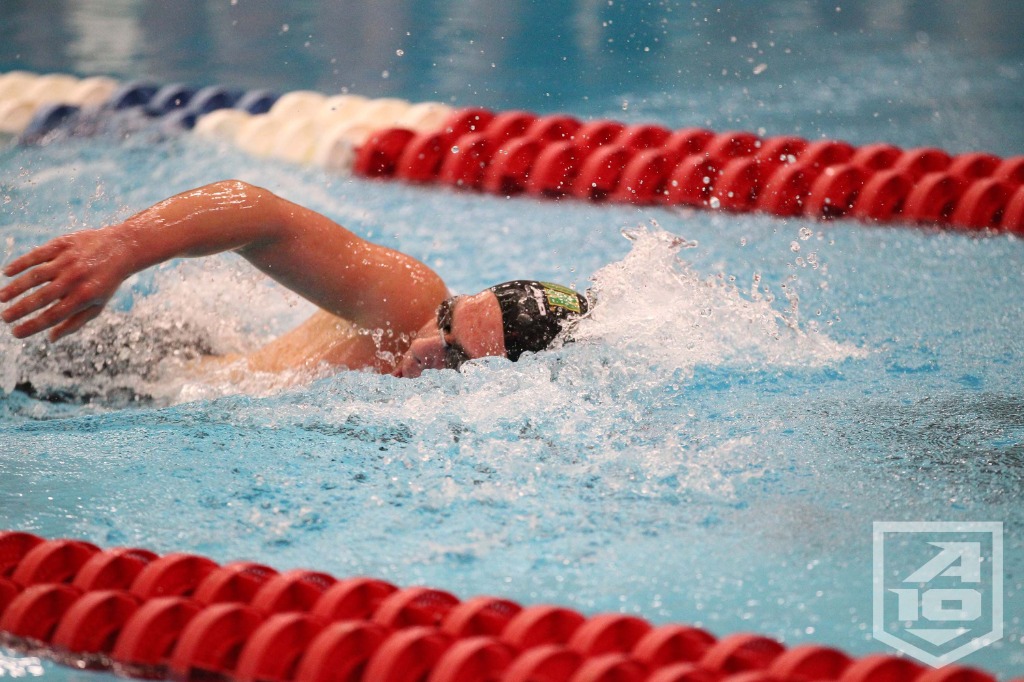 On night three of the 2022 Atlantic 10 Championships, the George Mason women made history by winning their first-ever conference relay title, taking down a ten-year standing conference record in the process.

In the 400 medley relay, Ali Tyler, Jacquee Clabeaux, Abigail Murtaugh, and Emma De Jong together swam a time of 3:37.99 to destroy Fordham and Richmond’s shared record of 3:40.20 by three seconds, with Richmond’s record being set all the way back in 2012. Their relay also took down the pool record of 3:39.17 set by Villanova in 2018.

Tyler opened with a 52.93 backstroke split when no other woman in the field went under 54 seconds, and then handed things off to Cleabeaux, the conference record holder in the 100 breast who swam her leg in a time of 1:00.04. Murtaugh went 55.00 on fly, before De Jong anchored in a 50.02 free split to finish things off.

George Washington was the runner-up in the relay with a time of 3:40.52, and Richmond finished third close behind in a 3:40.59.

The George Washington men and women still have the most points out of any team for the third day in a row of the meet.

Ainhoa Martin of Fordham won the 400 IM in a time of 4:13.27, breaking a meet and pool record in the process. Duquesne’s Emma Menzer improved from her third-place finish year to take second with a 4:13.74, and Julia Knox of George Washington was third with a time of 4;15.38.

In the 100 fly, Davidson’s Shelby Stanley defended her title from last year, winning in a conference record time of 52.94. The old record of 53.03 was set by Fordham’s Mia Bullock in 2020, which means that Stanley is the first woman in the conference to break 53 seconds. Duquesne’s Mendy De Rooi was second with a 53.08 to grab her second runner-up finish, and Barbara Schaal of George Washington took third a 53.98.

George Mason’s Jacquee Clabeaux and St. Bonaventure’s Rachel Kimmel have taken the top two spots in the 100 breast for the last two conference championships, with Clabeaux taking the win in 2020 in a conference time, while Kimmel got the best out of Clabeaux in 2021. This year, Clabeaux beat out Kimmel and her old conference record in a time of 1:00.08, a few-tenths faster than her 2020 mark of 1:00.31. Kimmel was second in a 1:00.76 that was just 0.01 off of her 2021 time, and Fordham’s Rebecca Kamau was third with a time of 1:01.83.

Ali Tyler won her second individual event in the 100 back, taking the event in a 53.13 just before she split 52.93 in the 400 medley relay. She beat out George Washington teammates Marlee Rickert and Schaal, who were second and third with times of 53.58 and 54.00 respectively.

The George Washington men are in the lead, but they had their event win streak snapped when Davidson’s Ben McClain and Massachusetts’ Jack Artis took wins in the 200 free and 100 breast respectively.

George Washington’s Connor Rodgers and Josh Legge went 1-2 in the 200 free prelims, but it was McClain who pulled off the win in the finals with a time of 1:37.95. Legge was second in a 1:38.39, and Emerson Kiefer of Massachusetts was third with a 1:38.85. Defending champion, George Mason’s Anthony Nguyen, dropped to the B-Final to place 12th with a 1:40.02.

Artis won the 100 breast in a 54.68, nearly edging out George Washington’s Tyler Kawakami, who entered the meet having the fastest time in the conference this year by two seconds, took second in a time of 54.91. Cael McLaren of Davidson finished third with a 55.08. Artis’s time was an improvement from the 55.22 he swam last year to finish fifth.

Marek Osina completed the IM sweep by winning the 400 IM in a 3:46.40, a whole three seconds faster than the 3:49.30 he swam at least year’s meet. Although Osina was leading for the whole race, his teammate Bode Ringenbach was very close behind him to take second in a 3:46.40. La Salle’s Zachary Wolbert finished third with a time of 3:50.76.

Fresh off breaking the 50 free conference record the night before, Djurdje Matic won the 100 fly in a meet record time of 45.79 that was just 0.07 shy of his conference record of 45.72 set back in December this season. The event was a podium sweep for George Washington, as Matic’s teammates Ethan Tulenko and Dylan Koo took second and third with times of 47.88 and 48.06 respectively.

George Washington’s Karol Mylnarcyzk won the 100 back in a time of 47.46, as Alexander Franklin, the freshman out of George Mason, came behind to touch second in a 47.77. Mylnarcyzk’s teammate Ryan Patterson was third with a time of 47.92.

In the 400 medley relay, Osina opened things off in a 46.08 backstroke split before Kawakami went 54.02 in breaststroke. Next, Matic split 46.01 on fly before Mylnarcyzk anchored freestyle in a 43.66 to give George Washington the 400 medley relay title in a time of 3:10.45. All of their splits were the fastest of the field. George Mason was nearly five seconds behind in second with a 3:15.29, and St Bonaventure took third with a 3:16.41.