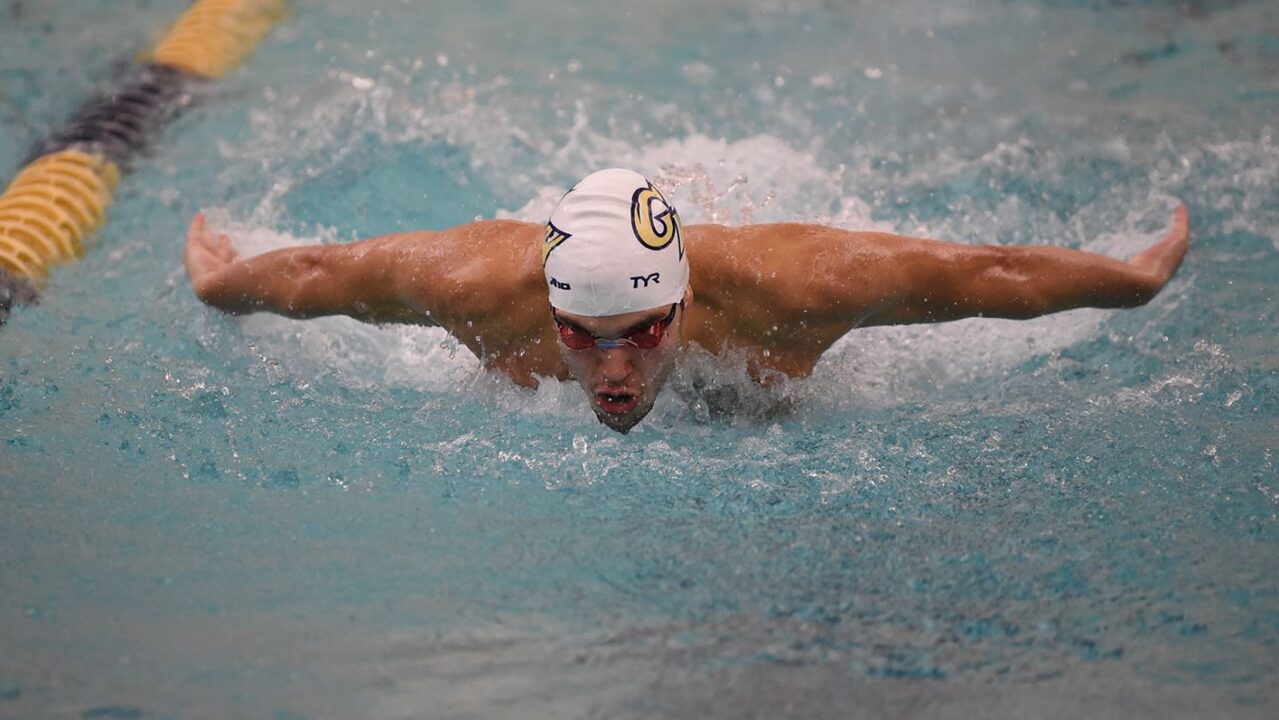 GW sophomore Djurde Matic is among the swimmers projected to lead the Colonial men to a fifth-straight A10 Championship title. Archive photo via Greg Fiume

The Atlantic 10 Conference Championships are back to their normal February dates this year, after being rescheduled to April last season due to COVID-19 just like many other mid-major conference championships.

George Washington is the clear favorite to win the men’s meet, and could very well sweep it. They have the top times in the conference for every event this season so far and are led by stars Marek Osina, Tyler Kawakami, Karol Mylnarczyk, and Djurdje Matic, who are all slated to win multiple individual events this meet. George Washington is the defending conference champion, and if they win this year, it will be their fourth title in five years.

Although Richmond is the deafening champion, the women’s meet looks to be a fight for the top spot between George Washington and Duquesne due to the massive depth of both teams this season. However, the biggest star of the meet could be George Mason freshman Ali Tyler, who has the top time in the conference for the 50/100 free, 100/200 back, and the 400 IM.

Two of the biggest stars on the women’s side of the conference, George Mason’s Ali Tyler and Dusquene’s Mendy De Rooi, are both newcomers.

Even though she’s only a freshman, Tyler’s list of accolades already exceeds those of most other women in the conference. She leads the conference in five events, and her best times in all five of these events would have won conference titles last season. Although she is the heavy favorite in events like the 200 back, the 50 might be a toss-up.

This is due to DeRooi, who is seeded second in the 50/100 free and is the top seed in the 100 fly. DeRooi, a fifth-year transfer from the University of Cumberlands, has made an immediate impact for her team this season.

Tyler and DeRooi are seeded only hundreds of seconds apart from each other, with times of 22.65 and 22.68. They are the only two women in the conference that have been under 23 seconds this season, and both of their times would have won last year’s race by nearly half a second. In addition, their entry times are inching closer to Syndey Fuller’s conference record of 22.51.

Both Tyler and DeRooi’s times in the event are expected to be very impressive, but only one person can emerge victories.

George Mason’s Jacquee Clabeaux and St. Bonaventure’s Rachel Kimmel have been rivals in the 100 breast for the last two years. In 2020, Clabeaux took the win in a conference record time of 1:00.31 while Kimmel was in second. However, they switched places in 2021 when Kimmel took the win in a 1:00.75 to become the second woman under the 1:01 barrier.

Kimmel is the top seed in the event with a time of 1:01.32, nearly three seconds ahead of Clabeaux’s fifth-seeded time of 1:04.00. However, Clabeaux has only swam the 100 breast twice this season, once in an October invite and the other at a dual meet, which indicates that she could drop a lot of time entering conferences.

Add in Fordham’s Rebecca Kamau to make this event an even bigger showdown. Kamau, a transfer from Northwestern, is entered as the second seed with a time of 1:02.00. Last year at Big Tens, she was 8th in the 200 breast and 16th in the 100 breast, but her times make her a podium contender at this meet.

Although George Washington swimmers are favored to win almost every single event, the 200 free may be a title that is not guaranteed. George Washington’s Karol Mylanarcyzk is the top seed in the event by over two seconds with a time of 1:38.69, but he is over-entered in events and may not compete in the 200, especially since he also entered in the 100 back right afterward and is 0.04 off the conference record in the latter event.

The defending champion in this event, George Mason’s Anthony Nguyen, could potentially be the one to win this event. Although he is seeded fourth with a time of 1:40.80, his best time of 1:37.47 is faster than the rest of the men competing in the event.

George Washington’s Marek Osina was just short of an IM sweep at least year’s conference championships. He won the 200IM in a conference record time of 1:45.18, but was second in the 400 IM after taking the top spot in prelims.

Osina is the top seed entering this year’s meet with a time of 3:50.47, but is ranked less than a second ahead of his teammate, freshman Bode Ringenbach who has an entry time of 3:51.27. Ringenbach adds onto George Washington’s dominant group of swimmers and will make the 400 IM the battle of two teammates with him and Osina.

Although the meet could be very tight between George Washington and Duquesne, the absence of star Duquesne backstroker Audrey Steen in the entry list hurts her team and gives George Washington the edge. Davidson has many top three finishers from last year seeded lower than expected, and if they are able to hit their taper, they could perform better than the Swimulator predicts. The same situation goes for Richmond, which has two defending champions, Margaret Purcell and Lauren Medlin, who are seeded outside of the top six currently.

George Washington is the obvious favorite on the men’s side of the meet, with George Mason and Massachusetts engaged in a battle for second. The two latter teams both have very deep squads, but George Mason gets the pick due to their stronger relay potential.

Richmond hasn’t even suited up this year. Swimulator isn’t even close