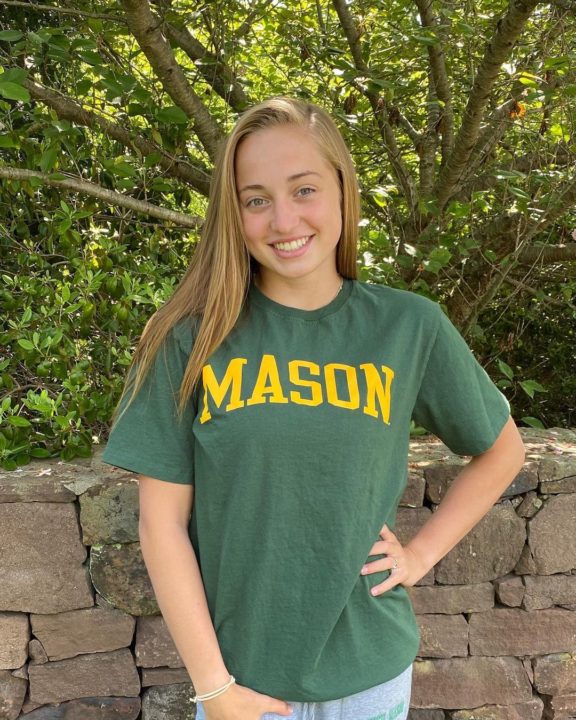 Ali Tyler, already an A-10 record holder in the 200 back and 400 IM, broke the 50 free record in a time that would have gotten her an NCAA invite last season. Archive photo via Ali Tyler

The first day of individual races in the 2022 Atlantic 10 Conference Championships kicked off Thursday, which included the debut of standout George Mason Freshman Ali Tyler, who took the 50 free conference title in one of the most anticipated races of the meet.

On Thursday morning in prelims, Tyler obliterated the A-10 conference record in a personal best time of 22.29. She beat out former George Mason swimmer Sydney Fisher’s old record of 22.51, which has stood since the 2016-17 season. She went a tad slower during finals, swimming a 22.32, but it still blew away the rest of the field and was good enough for her to take the title. Tyler’s conference record is an NCAA “B” cut, and is under the time that it took to be invited to NCAAs last year. Tyler is also an Olympic Trials Wave I qualifier, swimming the 100 back and the 200 IM at the meet last summer.

Duquesne’s Mendy De Rooi, who was seeded just 0.03 seconds behind Tyler, took the runner-up finish in the 50 free in a time of 22.72, which is also an NCAA “B” cut. Richmond freshman Abby Fuller was third, swimming a 22.92. After no women in the conference swam under 23 seconds last season, this year’s championship final was much faster, with the top three finishers all underneath that mark.

After two days of racing, George Washington leads by a considerable margin on both the men’s and women’s side of the competition.

Another conference record fell to the hands of Shelby Stanley, who won the 200 IM in a time of 1:57.89 to break Emma Brinton’s old record of 1:58.90 from the 2018-19 season. Stanley was one of the biggest stars of the 2021 championship meet, sweeping the butterfly events, but did not swim the 200 IM last year. Julia Knox of George Washington finished second with a time of 1:59.20, and Ainhoa Martin of Fordham was third with a time of 2:00.47. Maggie Purcell, the defending champion, was pushed down to fifth to finish with a time of 2:00.63.

The George Washington men swept all four of their events on day two, continuing their undefeated streak this meet and grabbing two conference records in the process.

Connor Rodgers won the 500 free in a time of 4:24.11, a new personal best for him. Entering the season, his best time in the event was 4:35.78, which shops a sharp drop in time for him since the start of college. Wilson Dubois of Massachusetts was second in a 4:26.33, while Rodgers’ teammate Phillip Moldovanu swam a 4:28.08 to touch third.

In a race that was as impressive as the women’s final, Djurdje Matic crushed Michael Pilyugin’s conference record of 19.84 in the 50 free from the 2015-16 season with a time of 19.51. He won the race by nearly half a second, with second-place finisher and Matic’s teammate Tyler Kawakami going a time of 20.03. George Mason’s Will Rastatter was third with a time of 20.23.