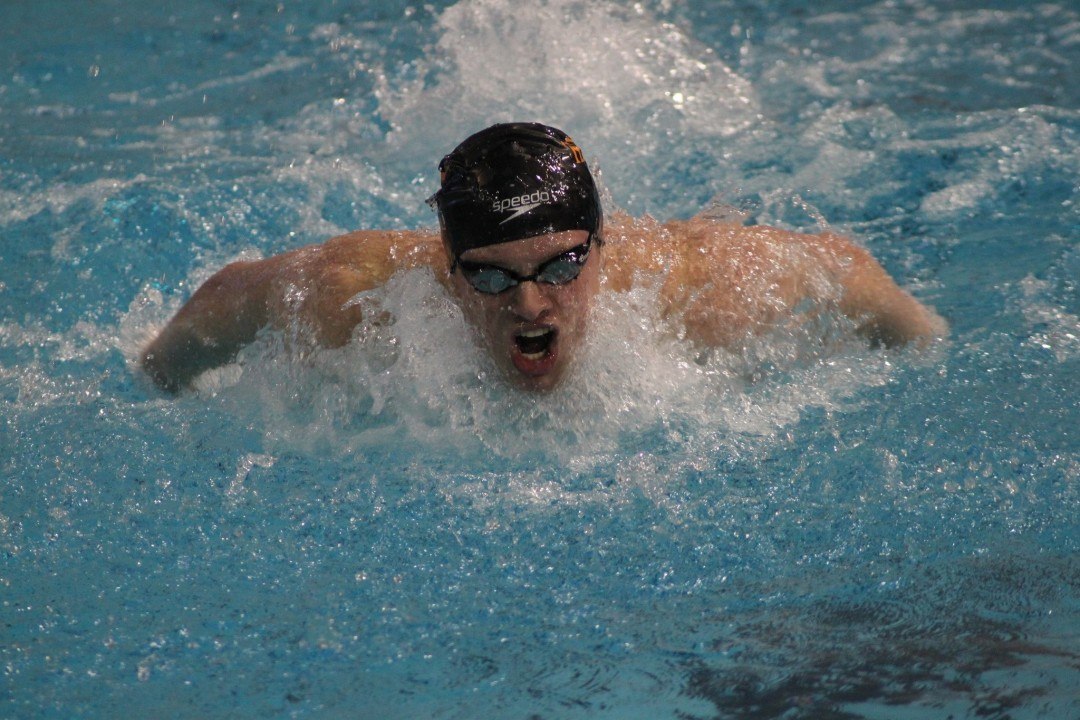 3 of the 5 best 200 flyers in NCAA history performed at separate times and in separate places last week, further building the excitement for when all three finally meet head to head. Archive photo via Andy Ringgold/Aringo Photography

The second of two jam-packed weeks of college conference meet action has wrapped up, and we’ve covered each meet in-depth. But on a larger scale, what were some of the biggest outcomes of the week nationally? Here’s 8 big things we noticed:

1. A battle for 200 fly supremacy divided by a thousand miles: One of the interesting quirks of last weekend was that we saw three of the fastest 200 butterfly performances in history, with three swimmers all jockeying for the American record but never squaring off head-to-head. The obvious battle was Texas sophomore Jack Conger (1:39.31) vs Michigan junior Dylan Bosch (1:40.75). Bosch, the 2014 NCAA champ and US Open record-holder heading into the week, saw Conger sneak under his record by .02 at the Big 12 championships. But here’s where it gets interesting. Despite being teammates swimming at the same meet, Conger and freshman Joseph Schooling also didn’t race directly, as Conger’s time was done in a time trial and Schooling’s (1:40.59) in the 200 fly final.

That should set up tremendous drama for the first time these three race in the same pool, and all fully rested. (Word out of both the Texas and Michigan camps is that all three were only partially rested and/or unshaved, though that is now basically the standard cliche line for fans and coaches talking about a swimmer’s great swim). Conger still hasn’t confirmed he’ll swim the race at NCAAs, but it’s hard to see him choosing the 200 back instead, the way his butterfly is sizzling. Those three currently rank #1 (Conger), #2 (Bosch) and #5 (Schooling) in NCAA history, and it’s quite possible we see the three fastest 200 butterflys ever in the same pool later on this month.

2. Revisiting a seemingly-settled women’s NCAA race: One of the big take-aways from week 1 was just how incredibly good the Georgia women are, even with many big-name athletes not fully rested. But this week the ladies of Cal were no slouches themselves, looking awfully tough and taking down one of Georgia’s own American records in the process. Could we have written off the women’s NCAA race a week too early? Georgia is still clearly deeper and more well-rounded than Cal, without any major weaknesses while Cal still struggles in breaststroke and diving. But the Golden Bears have the nation’s best individual swimmer in Missy Franklin, who looks ready to do historic things in her final NCAA season. And don’t sleep on Stanford, the breakout team from last year’s NCAAs who have their own otherworldly star in Simone Manuel, who might have a bigger relay impact than even Franklin. All that is to say that Georgia should still be considered the clear title favorites, but that this race could still flip any which way when the action finally starts later this month.

3. Fresh faces at the top: If we were to sum up the team battles from last week, it would probably include something about perennial powerhouses narrowly surviving close calls but still repeating as team champions. Among the repeat champs last week: Virginia (ACC), Minnesota (Big Ten), Georgia (SEC women), Florida (SEC men), Princeton (Ivy League) and Missouri State (Missouri Valley). But week two was all about “in with the new,” with several upstart programs getting to the top of the podium over the defending champs. Nowhere was that more notable than the men’s ACC, where NC State won its first title since the mid-1990s, and new addition Louisville also bumped off defending champs Virginia Tech. Meanwhile William & Mary ended a 13-year win streak for UNC-Wilmington in the men’s CAA. Plus, Central Connecticut State overcame 2014 champs Wagner in the NEC in a weekend that really showed off some parity in Division I conference play.

4. Texas moves, Cal’s turn to counter: This weekend also gave us a glimpse at one of the two biggest favorites for the men’s NCAA crown, as the Texas Longhorns ran roughshod through the Big 12. Spoiler alert: they’re really good. A stellar regular season had Texas already holding “favorite” status, but an explosive Big 12 meet only solidifies that pick further. Between Jack Conger‘s American record 200 fly, a pair of 44-second 100 flyers or Will Licon smashing school records like pumpkins, Texas was grabbing headline after headline all week. But out on the West Coast, Cal still waits patiently for their turn to countermove. The Golden Bears have gained near-legend status for their annual monster taper drops, but they’ll have some serious work cut out for them to look like a challenge to Texas. Florida and Michigan look to have outside shots, but it’s pretty clear Cal and Texas are in their own league right now. This coming week will give us our first clear look at how the two teams stack up against one another, and should also unleash the fury of “he didn’t rest/had a full beard/did 15K the day before/had scarlet fever all week” banter from both sides that makes college post-season swimming so intriguing.

5. NC State relays are the real deal: the North Carolina State Wolfpack program is built around relay success, and success is exactly what they found at men’s ACCs. The Wolfpack won 4 of 5 relays at ACCs, losing only the 400 medley by half a second to Louisville. Excluding that relay, NC State is ranked in the top 3 nationally in every other relay race, including the #1 ranking in both the 200 and 400 free relays. The typical argument is that NC State won’t have much time left to drop at NCAAs, but it looks like they might not need much: their 200 free relay is just .35 off of last year’s NCAA winning time, and their 400 free relay just .6 off. With Simonas Bilis joining the 18-second club over the weekend (more on that in #6), the team has an elite weapon on both relays as the Wolfpack hunts for national titles.

6. Bilis cracks 19 – how many more will join him? NC State’s Bilis became just the third guy in the NCAA to break into the 18-second range in the 50 free this season with a relay leadoff of 18.98. Last year, we had 5 college swimmers in the 18s in all, with two of them (Minnesota’s Derek Toomey and Florida’s Brad deBorde) now graduated. How many more swimmers will join Bilis, Caeleb Dressel and Kristian Gkolomeev under 19 this week? The best bets seem to be Arizona’s Brad Tandy and Cal’s Seth Stubblefield, each of whom broke the barrier last year. Cal’s Tyler Messerschmidt could have an outside shot, plus maybe Utah’s Nick Soedel in what could be one of the fastest national 50 free fields in history.

7. Missy vs Simone – Round 1: The race of the weekend was a showdown between likely the two best overall swimmers in the NCAA right now. Cal’s Missy Franklin and Stanford’s Simone Manuel went head-to-head just once individually, in the 200 free. That’s probably about as close to “neutral ground” as you can get with these two, as Manuel dominates the sprint freestyles and Franklin crushes the backstrokes and mid-distance freestyles. Round 1 went to Franklin, who blasted a 1:41.09 to Manuel’s 1:41.15, the 2nd- and 3rd-best performances in history. The two could be on a crash course to both shatter Franklin’s American record 1:40.31 in the event come NCAAs.

8. Last Chance meets – what’s with these 400 IMers??? The other excitement of the weekend came in the form of “last chance” meets, which offer swimmers one final opportunity to improve their national ranks in hopes of earning an NCAA bid. What was really exceptional about this year’s crop of women’s last chance meets, though, was how many 400 IMers improved their stock drastically. In perhaps the one event you don’t want to swim any more times than you need to – and also an event where it can often be difficult to maintain a taper for a full week beyond a conference championship meet – we saw at least 5 women improve their season-best to a territory that will likely punch their tickets to the NCAA Championships. At the Georgia Last Chance meet, Alabama’s Mia Nonnenberg and Louisville’s Abby Chin swam the 400 IM twice, prelims and finals, and incredibly improved their season-bests in both swims. Nonnenberg now sits 20th in the nation after shattering a Crimson Tide school record, and Chin is 36th, both very likely above the cut line. At that same meet, Georgia’s Nicole Vernon and Megan Kingsley both improved their season-bests in a prelims swim; Vernon (21st nationally) is probably in, though Kingsley (40th) would probably need some luck to make the cut. And then there’s Florida’s Georgia Hohmann, who swam at the Gators’ Last Chance meet and improved her own season-best to 28th in the NCAA. Coming from a writer/swimmer (and former last-chance meet competitor himself) who would probably be out of commission for the day after just one 400 IM, major props to all five ladies and all the rest of the “last chancers” who fought for their NCAA bids right down to the final moments.

“Big 12 meet only solidifies that pick any further.” That was in regards to Texas being the favorite and NCAAs. I would definitely disagree. In the live results they had listed what times it took to make it to NCAAs last, and almost none there main guys were clearly under those times. Conger and Schooling were amazing, Licon was spectacular, the other breaststrokers were pretty good. Ringold was pretty good. That is a lot, but not enough. I definitely agree with Eddie Reese in that video interview, there didnt seem to be a sense of urgency to qualify because we have been talking about how good Texas is for months now. SEC showed up to play. B1G showed up to… Read more »

I very much disagree. Texas already received most of the necessary cuts from the Texas invite. There is no pressure in the Big Xii from TCU or WVU (no offense). That meet is to simply see where their team is on a couple days of rest, not to necessarily qualify for NCAAs. I have seen Eddie do this year in and year out. He knows where his swimmers are and what it takes to win/qualify for NCAA. How many NCAA titles does he have? How many Olympic medalists gold/others has he coached? I think it’s safe to say that Texas didn’t simply sit in the stands and gamble this week.

“Sit in the stands and gamble”? How is overqualifying for NCAAs doing that?

In between previous meets and the Big 12 Championship, Texas has like 16 or 17 guys who are clearly under last year’s invite times.

Clearly samh didn’t watch the big 12 swim and dive meet. Either that or 4:13 500 free by Clark Smith is just average now a days. Oh and 4 guys under 46 is totally under performing. Don’t let me forget Jonathan Roberts 4:15 500 free… This is getting so awkward