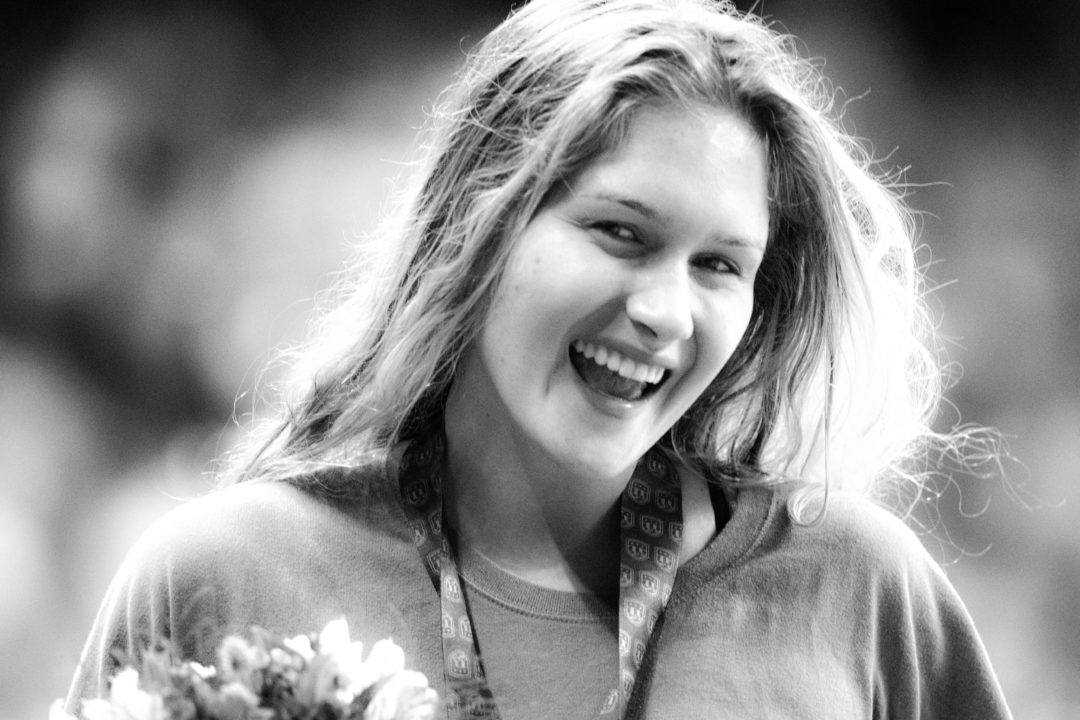 Olivia Smoliga is scheduled to swim her first races of the 2017-2018 season at this weekend's Winter National Championships.

The 2017 USA Swimming Winter National Championships kick off on Wednesday evening in Columbus, Ohio with timed finals in the 200 medley and 800 freestyle relays. Aside from the 200 medley sliding to day 1 of the meet, the order of events will follow the standard NCAA Championship order (in other words, the meet in totality follows the NCAA 4-day conference championship meet schedule).

The mix will be college-heavy, but will have enough National Team names floating about to make this the premier event worth of its designation of National Championship, even if in short course yards.

Below, we’ve highlighted 5 races that you should really pay attention to at this week’s meet for one reason or another. The racing begins at 6PM Eastern Time.

1. Men’s 200 IM – Aside from a single 200 yard back swim at an unpublicized “USAS Invite” in early October, Winter Nationals will be Chase Kalisz’s season debut since winning gold in the 200 and 400 IMs at last summer’s World Championships. He is scheduled to swim 5 races – the 200 IM, 400 IM, 200 free, 200 back, and 200 fly – a yeoman’s effort in a 3-day, prelims-finals outing. The most interesting among those races should be the 200 IM, where Kalisz isn’t the top seed. That honor belongs to Scotsman Mark Szaranek, currently competing at the University of Florida, who has been half-a-second faster than Kalisz in yards, and is the 10th-fastest man ever in the event. Kalisz’s 200 speed is relatively newly-found as compared to his 400 IM quality. Szaranek could be due for a big result, depending on how the Gators approach this meet, and Kalisz could be due for a short course correction on his long course results, depending on what kind of shape he’s in. Adding in National Teamers Ryan Murphy, Josh Prenot, and Michael Andrew will ratchet up the intensity for what should be a high-quality final.

2. Women’s 100 Free – There’s a few interesting things going on here. First of all, like her former University of Georgia teammate Kalisz, this will be Olivia Smoliga‘s first meet back from the summer. This will be the first good test of Smoliga the professional – she finished her record-setting, NCAA title-winning career at Georgia in the spring, and now has entered her first full training cycle without the rigors of the collegiate system. Then there’s the Mallory Comerford storyline. She broke the American Record in long course this summer, and swam an electric early-season 1:41.60 in the 200 free at the College Challenge. She’s already qualified for NCAAs, so we’ll have to see how Louisville and Arthur Albiero prepare for this meet, but Comerford should have sub-46 in her sights for this season in the 100 free. If the 17-year old Isabel Ivey can drag along with them, this becomes a fun race with one pro, one college swimmer, and one high school swimmer that very well could be the American 400 free relay in Tokyo or Paris.

3. Men’s 100 Breaststroke – National Junior teamer and Cal commit Reece Whitley has had some monster swims already this fall. His times have in some cases been “best in-season” and at other times been “absolute best times,” all done at otherwise-unnoteworthy meets. All outward signs point to a couple of big breaststroke swims for him, and hopefully a re-ignition of the Whitley-Michael Andrew rivalry in this 100 breaststroke. Olympic medalist Cody Miller will throw his name into that hat as well – and really is the favorite in spite of being just the 3rd seed – but the matchup between Whitley and Andrew is a good subplot. Kevin Cordes’ National Age Group Record of 51.76 should be nervous – Whitley has been 51.84 and Andrew has been 51.90.

4. Women’s 100 Fly – Kelsi Worrell is now married and back to the pool. One of the most electric female swimmers in short course yards of the last decade, Worrell hasn’t swum short course yards in over a year. She should at least get Christine Magnuson’s Pool Record of 50.70. She’ll have clean water, so be ready for a crazy time. Or, even better, look for her fellow Louisville Cardinals Grace Oglesby and Nastja Govejsek, the 4th and 5th seeds respectively, to show off the same improvements that Worrell did as an underclassmen.

5. Men’s 500 Free – The focus lately has been on the Indiana sprinters, but their post-graduate group is developing a decidedly-distance-based-bent. Two members of that group, Marwan El Kamash and Zane Grothe, will face off in the men’s 500 and 1650 freestyles (their training partner Ashley Neidigh will swim the women’s distance races). With Marcelo Acosta in the loop as well, plus Ohio State (home pool’s) Brayden Seal and the transitioning-to-American Andrea D’Arrigo, the 500 should be the most exciting of the distance events.

Watch out for Margo Geer in the 100! She’s been training with Coley and Indiana for a few months now!

Olivia Smoliga is so BEAUTIFUL!!!!!