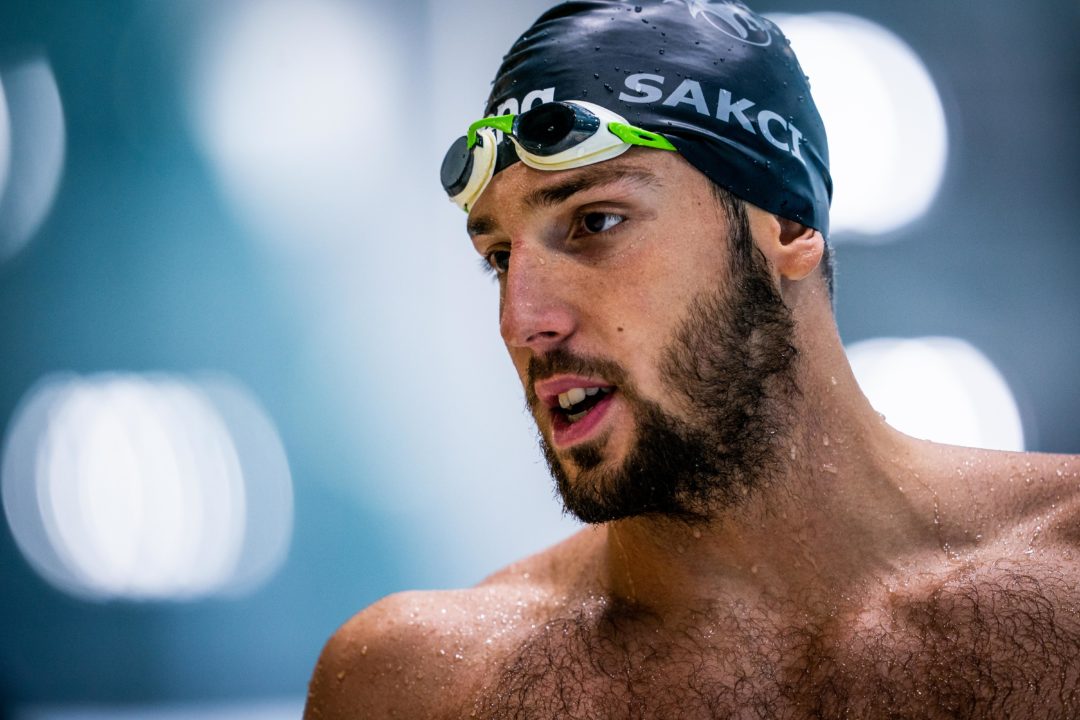 Emre Sakci carried Iron today. Not only did he win the 50 breast, Sakci obliterated the field on his medley relay split, and also split 46.9 on a free relay. Archive photo via Mine Kasapoglu

We’re halfway through match #4 of the 2020 ISL season. Here’s a look at some of today’s key storylines.

It would have been easy to write off the New York Breakers. They were 8th among 8 teams last year, and finished 4th of 4 teams in the 2020 season opener, more than 150 points behind the next-closest team.

But we’ve continued to assert that a mostly-rebuilt Breakers team is clearly better than it was a year ago. We noted the difficulty of last week’s field and moved the Breakers up in our Power Ranks, into a spot that would yield a post-season berth.

The Breakers proved us right today, showing up with their best session yet. The Breakers are currently sitting second in team points, 11 points ahead of Iron, who we ranked 6th in league-wide Power Rankings.

They had a number of key swims. We’ll expand more on Marco Koch‘s massive 200 breast win below. Kasia Wasick jumped from relay-only status last week to winning the 50 free this week. Joe Litchfield was second in the 100 fly, 3rd in the 200 IM, 2nd in the 50 back and swam a key medley relay butterfly leg. And Abbie Wood was 2nd in a huge 200 IM finish. What’s especially notable is that the Breakers have powered their big day not through wins by star Michael Andrew, but with a much more well-rounded attack.

Getting Closer To Total Jackpot

NY Breaker Marco Koch hit the biggest jackpot we’ve seen yet in the ISL. The German national crushed a 2:00.81 in the 200 breast, rattling a world record and winning by almost four seconds. Koch hit the jackpot margin (5 seconds in that event) over 6 of the 8 swimmers in the field, stealing a whopping 21 points from his opponents for a massive 30-point event.

If Tommy Cope had swum a tick slower than he did last week, Koch would have completed the league’s first-ever total jackpot – a swim where the winner steals the points of all 7 opponents.

With the league so far showing some thin fields in men’s breaststroke, Koch is one to keep an eye on as we wait for the first-ever total jackpot.

The 200 IM looked wide open today. Both of last week’s winners (Aqua Centurion Philip Heintz and LA Current’s Andrew Seliskar) swam in the other matchup this week, and both lost to Tokyo’s Kosuke Hagino. That opened up the field for Iron’s Leonardo Santos, who was second to Heintz last week.

But Santos didn’t just cruise against a weaker field. He went almost a full second faster than he was a week ago, winning in 1:52.84 and coming within a tenth of Heintz’ league-leading time. The men’s IMs don’t really have a clear-cut frontrunner the way the women’s do, and Santos is carrying on a rich Iron IM tradition by putting himself near the top of the league there moving forward.

The real powerhouse for Iron, though, has been breaststroker Emre Sakci. He made waves last week by beating long course world record-holder Adam Peaty head to head. With Peaty on bye along with ISL leader Ilya Shymanovich, Sakci starred in match 4, crushing a 25.50 to unseat Shymanovich for the league’s best time.

But his contributions today went well beyond that 50 breast win (which also included jackpots of 5 of the 8 swimmers in the field). Sakci came directly off that 50 breast and anchored Iron’s 4×100 free relay – a very rare combination for a breaststroker. Sakci was an outstanding 46.99 on that split, outsplitting many primary sprint freestylers as Iron took second overall.

Sakci was also the difference-maker in the medley relay, outsplitting both Ian Finnerty and Caeleb Dressel by about two full seconds as Iron’s relay beat Finnerty’s DC team and Dressel’s Cali relay. Iron was slower than DC and Cali in both back and free, but still won the relay by nearly a full second.

That relay win is going to put Sakci in line for yet another massive contribution, as we expect Iron to pick the men’s 50 breaststroke as the stroke for tomorrow’s triple-points men’s skin race. Sakci is currently tied for second place in MVP points, and he could have a legitimate shot at meet MVP if he can win the skins with some jackpot points.

The DC Trident were the only team to go without an event win today. It wasn’t an awful showing for DC, but the jackpot points are really hurting the Trident by making their multiple second-place finishes much less impactful than an event win.

Here’s a look at all of DC’s runner-up finishes today, with the number of seconds behind the leader in parentheses:

Under last year’s scoring system, a winner would earn two more points than a runner-up each time. So over seven events, the winner would outscore the runner-up by 14 points. This year, jackpot points have made that collective margin five times bigger. Event winners have scored almost triple what DC’s runners-up have scored, sometimes by winning an event by half a second or less.

That’s why the jackpot points have been such a controversial addition to the lineup this season. There’s a certain logic to weighting even wins highest, and the ISL has made clear it prioritizes racing and winning. But for many, the current jackpot system has swung too far in that direction. Today, no team felt the downside of that swing harder than the DC Trident.

DC would have faired much better with the jackpots if they still had Ledecky running train on the 400 field.

DC is a solid team but needs a few stars – Simone and Katie perhaps???