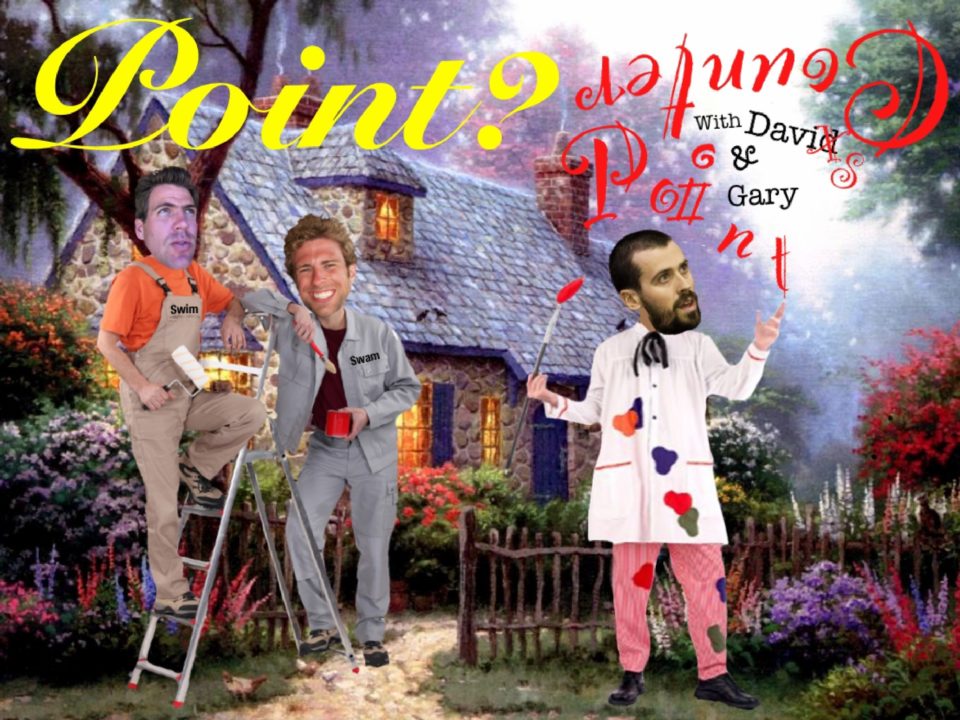 Davis Tarwater? Here? With...us? We couldn't believe it either! Come read how badly we muck it up, you'll hate it!

Pesto pasta is a quick and delicious option – who can resist the perfect balance of fresh basil, buttery roasted pine nuts, and salty Italian parmesan cheese?

Gary: David, we’re in a chat room. I can’t run away from you.

David (panting like a dog): I missed you man! Let’s talk about something.  Alex Meyer? Doping in Sports? Life sciences? We never caught up about the Golden Goggles, and that was like years ago! I’m yours man, whatever you want. Oh boy oh boy, let’s do this: so much fun!

Gary (disgusted): Fine! I’ll talk about the the Golden Goggles, an enchanted evening of water sport regalia for the ages. I must say, it would have been a shame to ruin such a splendid occasion with your presence.

Gary: You’ll never believe what happened. I bumped into your old friend, “Olympic Gold Medalist” Davis Tarwater. He bought me a drink and we’re friends now!

David: We really should have him on the show sometime. He’s a funny guy.

Gary: Yeahhh. About that. Dave, I don’t know how to say this so I’m just going to, well… Davis Tarwater is going to be my new writing partner on the Dave and Gary column.

You’ve been replaced. No. No. Wait. Let me try that again… David, you’re fired!

Donald Trump and Gary present male athlete of the year at Golden Goggles. (David Cromwell did not win. Again.)

David (single tear running down cheek): I thought you hated Davis?! Something about how he “politicked” his way on to a US Olympic team? Most of us thought that was really mean to say…

Gary: I know, right?! It’s crazy. He bought me a drink. It’s more than you’ve ever done for me. Anyway, he’s here now.

Davis: Hi Dave, Hi Gary. Ever since I helped Team USA win relay prelims at the Olympics, I’ve been on a whirlwind tour. Dave, I haven’t seen you since we were strapping young Harvard lads. Except I made that last thing up. But I am taking your place now in this column. Don’t worry though, there’s always a place at the end of the bench for the guy with great “team spirit.” That’s you now.

Gary: Sometimes things just happen. Best laid plans veer. Before the Golden Goggles I was on my way to spike Davis’ drink with a concoction of McAfee engineered himalayan bath salts and arsenic. Davis saw me approach and invited me over to have a drink. Sparks flew, singeing the eyes of reason.

We made use of the bath salts with Donald Trump and ended up having a great time.

Gary: On the bright side, I save a ton of money on swapping out letters when we change the title to Point? Counter Point with Davis and Gary. (Exalting) There’s not that many letters difference between David and Davis!

Davis: Yeah, I can’t wait to replace Cromwell. That ridiculous “D” on the end of his name makes my blood boil. I actually wasn’t the first choice for the job but the guy who made it in front of me scratched.* So now I’m the guy, and I demand some respect.

Gary: That is funny!

David: It’s cool man, I understand. This was bound to happen. So uh, what do you guys wanna talk about? Should I stay?

Gary: Sure! Stay. I suggest that we stop making sense though. Just for this one column. Let’s do it for Davis! To send Dave over the cliff into the sunset. Please. We’ve been straying from our original formula of disconnected combobulation!

Gary: On the bright side, you get a sunburn. David. Davis. Let’s do hyperlink madness. Where we go pants-off crazy. Where the doors of perception are tie-dyed into another dimension through the use of meaningless hyperlinks providing snapshots into our inner psyche. It’ll be fun. The tickle gloves (and pants) are off.

David (bursts blood vessel attempting to come up with something weird or funny): Uh?

Gary (doing a Groucho Marx impersonation): Did you hear the one about the pull buoy? It had a miserable job. Or was it a wonderful job? It depends on the pull buoy’s sexual orientation.

We’re not even trying anymore, are we?

Davis: Where am I?

David (feeling uncomfortable, but still trying to get everyone to like him): Wait! Wait! I’ve got one! Check out the critique of Keynes’ conception of utility and leisure!

Davis: Gary, I thought we really were picking up some steam there until Cromwell showed back up. It was my understanding that he would be “low key” during this whole event. You went on a long tirade about his wandering soul and bad personal habits. It was very upsetting to me. I left the conversation thinking “maybe we should get that guy some help.” I mean what is “delusional aquatic fanaticism” anyway?

David (finally fed up): You guys suck at this, and I’ll tell you why. The only reason 12 people clicked on this link was to find out: 1) if Davis has retired, and 2) what’s his next adventure. Yet…nothing.

Gary: Nothing. I have a question. Davis, what do you think about these spots? Go ahead and take a closer look. See ’em?

Davis: Gary that is ringworm, dude.

As far as retirement, it’s just a hard call. Lezak just told me to keep going until I can collect social security, but now there’s a question about it’s long term solvency, not to mention this impending fiscal cliff negotiation. Lets not even get into that. There’s just a lot of factors making financial planning so much more complicated. I mean with interest rates and dividends and capital gains and stocks and bonds and buy low/sell high and all that stuff. I went to Oxford so I understand all these difficult terms but I don’t have time to explain it you guys.

Gary (itching himself): Financial planning for swimmers! This guy is hilarious! Actually, I’d like to change that last word to “BORING!”

If David isn’t permitted to go prattling on in adoring admiration, I’m not sure we will ever get through this, which is proving to be the worst interview we’ve ever done, in the worst column ever written.

Have at it big guy.

David: Oh man, thanks! Okay, okay. So I prepared a lot for this interview, and watched the video of Davis’s swimming career  and then the video of his parents explaining their reaction to Davis’s making the team. I got so inspired I worked out, which felt great.

Davis: Who are those people?

Gary (returning with a soda): You always do that work out thing when you get worked up.

Davis: Yeah, I have never read your column before, but you just stated a fact. That’s not a question. You always do that. I can see you now, furrowed brow, as you do one set of bicep burnouts before crushing a protein shake and yelling “Take that Communism!” in the mirror.

David: Well, Messrs. Olympic Gold Medallists, maybe I have low self-confidence and need inspiration. Isn’t this what you [expletive removed]’s do…what you supposedly get paid to do?

Davis: Harvard is like the Michigan of the East. Some fat kid had that on his t-shirt in Ann Arbor, and I’ve been repeating it because its a fact. Everything you read is true. And as for motivating you, neither Gary nor I can reach you unless you want to be helped. I can’t just wave my magic wand due to the fact I’m writing this on a plane and it’s in my checked luggage. But I’m able and willing to cast a level 16 charm. I spent some time in England, the best training ground for young wizards such as myself. But, uh, I don’t want to brag. Now I’m blushing.

Gary: I got a magic wand. I keep it in my Speedo. Whenever I travel airport security wants to inspect it.
…Ringworm, huh?

David: Oh, well, you heard it here first: Davis and Gary are fakes. Not want help? I commit digital seppuku every other week on this blog. Cry for help? How about putting up with “hyperlink madness” (which was horrible btw, Davis you’re a good sport, but nobody likes it but Gary and his Jonestown swim team.**)

Gary: But. But. But. Fakes?! There hasn’t been a more inaccurate statement since the Village People sang, “It’s fun to stay at the YMCA!”

Why don’t you go flex yourself!

David: Nope! Not letting you end the column this way. Coherent thoughts will prevail. I’m summarizing Davis’s current whereabouts, and unless he corrects me, The Knoxville News will quote this: Davis is more likely to keep swimming than retire!

Davis: What is this, an USADA Update? I don’t owe you my whereabouts. I said good day Sir!

*Davis qualified for the 2012 Olympic Team in the 200 free when Michael Phelps scratched to focus on other events
**Sabir Muhammad, I know you’re out there.

This column couldn’t possibly make any less sense to the general reader, although I’m sure it’s hilarious to anyone who’s in on the joke.

Gary (squinting): Are you in on the joke, Bill?

I’m not, but it’s OK, I’ve been out of swimming for a few years.

Somewhere I have a great picture of you from 2004 Trials. You were reaching up to greet us in the box behind lane 4 where we were seated, wearing your Apollo Creed robe. That was awesome, by the way. The picture is on one of my computers somewhere. When I find it I’ll track you down and send it your way. Merry Christmas to you.

Merry Christmas to you too!

And by the way, ours is a nonsensical contribution to Swim Swam. There is no inside joke. It’s just, well, to quote jack-holes everywhere, “it is what it is.” As if that descriptive idiom ever helps…

This signals to me it is only a matter of time before Davis caves and joins twitter. Go ahead PVK is waiting…

I told Davis the exact same thing the moment he agreed to join us on the column. What a sell out!