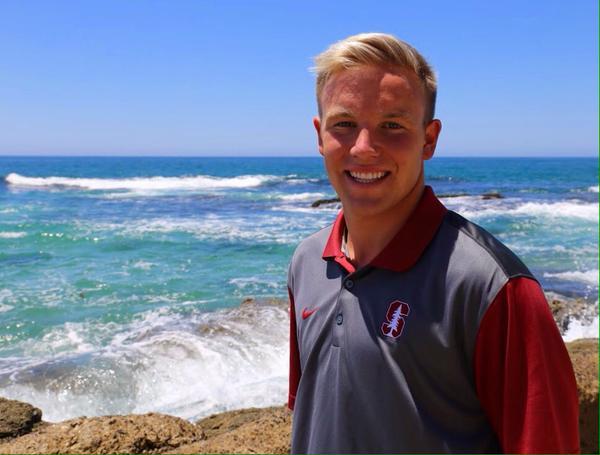 ﻿Grant Shoults, ﻿one of the top recruits in the nation, has given his verbal commitment to the Stanford Cardinals for 2016 and onwards. Current photo via Grant Shoults on Twitter

Grant Shoults, one of the top recruits in the nation, has given his verbal commitment to the Stanford Cardinal for 2016 and onwards.

We recently ranked Shoults #3 in our rankings of the top NCAA prospects in the nation, and he comes in with some huge times, including the recruiting class’s best 200 and 500 frees.

“I’m proud to share that I have the privilege of verbally committing to the Stanford Cardinal to be a student-athlete,” Shoults told SwimSwam. “For me, Stanford was the ‘whole package’. It represented what I was seeking from swimming with Coach Knapp and Coach Armstrong on the deck, a great group of guys in the water and an academic platform to help prepare me for life after swimming.”

This is a gigantic pickup for Stanford, which is moving on without NCAA and American record-holder David Nolan this coming season, and needs some big-time talents to replace him.

Shoults comes out of the Mission Viejo Nadadores program in Southern California, a team known for training tough, distance-oriented swimmers under coach Bill Rose. Shoults is no exception to that rule, projecting as a multi-distance freestyle threat in the college ranks, with some outside potential in the butterfly and IM races as well.

And his 44.66 in the 100 free that suggests he could eventually become a relay factor over the 4×100 yard distances too, if he develops his speed well in Palo Alto.

Stanford took 6th as a team at last year’s NCAA Championships. Shoults took time to express his gratitude for all the teams he met with during the recruiting process:

“The NCAA coaches and their staff that I have developed relationships with over the past 12 months were incredible,” he said. “As swimmers, we are blessed to participate in a sport with leaders with so much character and class. Thank you to those that shared their time and programs with me.

“Thank you to those who have supported me in this journey. ‘Fear the Tree!’”

As a Stanford alum, I am happy to see that he will be a Cardinal, but my question is, why is he not there already? My daughter is also a high school senior, has an almost identical birthday to his, except that she, like almost all of her classmates, was born in 1998, not 1997. Won’t Grant be 19 before he graduates high school? What’s the story?

Same story as lots of HS athletes – “red shirting” before they start HS so their parents can stoke their egos. Grant’s a great swimmer, but he’s truly a freshman in college.

You’re missing the point I’m trying to make (and GAA as I understand it) – exact age at the time of the accomplishment is most relevant, not your grade level.

2x8thgrad – I am missing the point you’re trying to make. I really don’t understand. What accomplishment are you trying to declare that he was 19 during? Since turning 19, 9 days ago, he hasn’t swum a race. He committed to Stanford at 18. He graduated high school at 18. He swam his National High School Record at 18. What is it that he’s done at the age of 19 that you’re trying to say he had an advantage with as compared to other high school swimmers?

I’m unknowing why Grant was allegedly held back a grade – I’m sure there is a good explanation. You are seemingly well informed, perhaps you know? To me, it makes no difference whether he was held back intentionally or if it was unavoidable – his accomplishments (this year) should be compared to a freshman in college rather than a “true” senior (or that of Kostoff and Conger).

Training with Egan may turn Shoults away from the 200 fly and toward the 1650. Egan trains super distance, and the two of them appear to be great friends, based on what I’ve seen at meets where they’re both in attendance.

First of all I don’t think shoults is a top 5 recruit! Maybe top 25 at best. Second of all I can’t see him making great progression at Stanford, I can see him adding one to five seconds per event for his freshman sophomore and junior year! And then finally going the same times as now his senior year

how in the world is he not a top 5 recruit? 1:34 and 4:15 as a JUNIOR in high school are already on the edge of scoring, a rare sight for mens recruits. We never know how any kid will swim in college so predicting his gains is just random and dumb.

One of the stupider comments I’ve seen here, EVER and with no reasons for the stupidity, just random predictions. With those times in Grade 11, any college in the country would be lucky to get him.

I thought you weren’t aloud to communicate with coaches until July first before senior year how has he talked to coaches over the last 12 months?

Swims – coaches can’t call you until JUly 1. You can call coaches prior to that.

Shoults is already faster than egan, who had a less than stellar performance this year, plus he adds the 200 fly giving him that versatility edge.

They’ve had quite a few guys walk in with some scoring/near scoring swims since Nolan arrived.