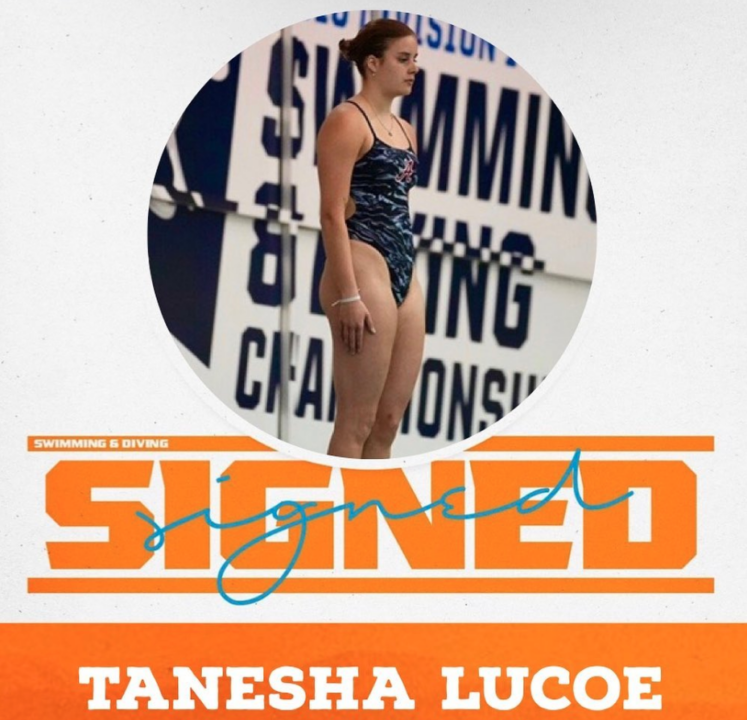 Lucoe won the platform diving event at both the 2020 and 2022 SEC Championships. As a freshman, she earned the SEC Freshman Diver of the Year award. Current photo via Tennessee Instagram

2x SEC diving platform champion Tanesha Lucoe has announced she will be transferring to Tennessee for her senior season.

A post shared by Tennessee Swimming and Diving (@vol_swimdive)

Lucoe spent her first three seasons at Alabama. This past season, Lucoe won the platform diving event at the 2022 SEC Championships scoring 304.10 points. She also finished 15th in the 3 meter diving event and 32nd in the 1 meter diving event. In total, Lucoe scored 44 individual points at SECs.

In her sophomore season, she was the runner up in the platform event at SECs. She also finished 11th on the 1 meter and 15th on the 3 meter then.

As a freshman, Lucoe won the platform event at the SEC Championships. She also finished 19th in the 1 meter and 28th in the 3 meter event. She also earned the SEC Freshman Diver of the Year award.

Alabama's Tanesha Lucoe won the SEC title in women's platform diving. The team made a coaching change for diving in November, now have a grad assistant leading the group. GA is the school's 4th diving coach in 5 seasons.

Tennessee has been home to many transfers in recent years. For example, all three of Tennessee’s returning fifth year senior women for this upcoming season all transferred into Tennessee sometime in their undergraduate careers.

The SEC changed its intra-conference transfer rules starting in the 2021 season. This allows for immediate eligibility when transferring within one’s own conference instead of having to sit out a season.

The Tennessee women captured the 2022 SEC Championship title. Notably, Tennessee’s weakest diving event was the platform event as they only scored 15 points in the event. They scored 23 points in the 3 meter and 25 points in the 1 meter.

Tennessee continues to load up well!

I have watched them work
This is a good call!