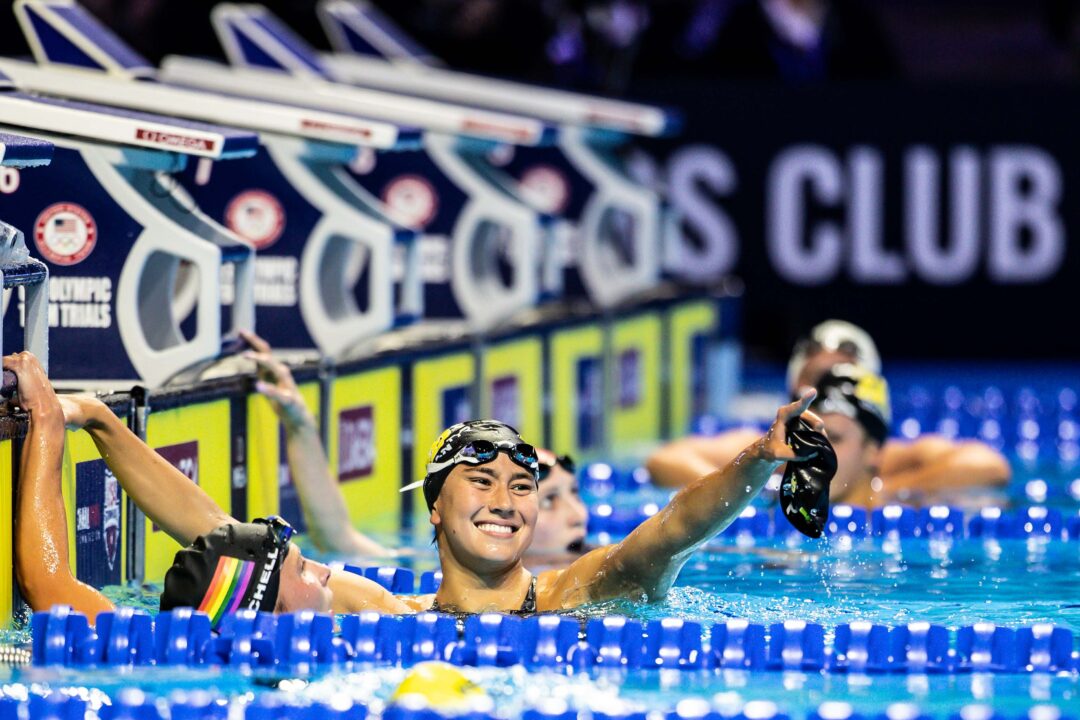 Though she's the #9 seed, and therefore won't be in the fastest heat, Sullivan has a PB of 15:23.81, which is nearly 20 seconds faster than anyone else. Stock photo via Jack Spitser/Spitser Photography

Last year, Paige Madden won the 1650 to complete her individual event sweep. This year, the field is young and deep. Five of the top ten seeds in the race are freshmen.

The fastest swimmer in the field, going by best time, is Erica Sullivan, a Texas freshman. Though she’s the #9 seed, and therefore won’t be in the fastest heat, Sullivan has a personal best of 15:23.81, which is nearly 20 seconds faster than anyone else in the field. She’s the #2 performer all-time in the event, behind only Katie Ledecky. As the 9th seed in the event, Sullivan will be in lane 4 of the 2nd-fastest heat, which could end up playing to her advantage.

Tennessee’s Kristen Stege enters the meet as the top seed after winning the SEC title in a new personal best of 15:42.37 last month. Stege finished 4th last year, swimming about 4.3 seconds off her seed time. The 1650 wasn’t particularly fast at last year’s NCAAs (versus previous years), however, which makes it hard to use last year’s results to project for this year.

Emma Nordin is someone we should all keep our eyes on in the fastest heat, which will swim during finals. Nordin is the #3 seed, coming in with her season and personal best of 15:47.15, which she swam at mid season. Nordin is such an interesting swimmer in this event because she was so off her season bests at Pac-12, swimming 16:11 in the 1650 for example. That would seemingly indicate, unless there was an illness we didn’t know about, that Nordin didn’t rest at all for Pac-12s, and has her eyes set solely on NCAAs.

Louisville freshman Liberty Williams won the ACC title with a 15:43.21, marking a personal best. She’s the #2 seed in the event, so she’ll be right in the middle of the pool, next to Stege. Similarly, Wisconsin freshman Paige McKenna won the Big Ten title with a new personal best of 15:47.31.

Texas 5th year Evie Pfeifer took 2nd last year, and will be in the 2nd-fastest heat, alongside Erica Sullivan. Pfeifer hasn’t been under 16:00 yet this season, but her best is 15:46.41, which she swam at last year’s NCAA Championship meet.

Northwestern sophomore Lola Mull swam a huge personal best at Big Tens last month, breaking 16:00 for the first time in her career, nearly getting under 15:50. She swam a 15:51.38 at Big Tens, making her the #6 seed for NCAAs. A repeat performance would almost certainly put Mull on the podium.

We’ve got another pair of freshmen to go over. Georgia freshman Abigail McCulloh went a personal best of 15:51.96 at SECs, making her the #8 seed and getting her into the fastest heat. Indiana freshman Ching Hwee Gan, who joined mid-season, is the #10 seed with a 15:53.81, which she swam at Big Tens. Notably, Gan has only swum the SCY 1650 twice before.

Darkhorse: Emma Weyant (Virginia) – Weyant, a freshman out of Virginia, is the #15 seed in the mile, coming in her with her season best of 16:02.51, which she swam at the Tennessee Invite in November. Weyant’s best event is the 400 IM, in which she won the Silver medal at the Tokyo 2020 Olympics last summer, but she’s an excellent freestyler as well. As the 15th seed, Weyant will be in the 2nd-fastest heat of the race, along with Erica Sullivan and Evie Pfeifer, which sets her up really nicely to have people to race to get under 16:00.

This year, Sullivan switched from her life revolving almost solely around swimming with the Sandpipers (30hr training weeks, month-long training trips, 10k practices, etc) to being a student-athlete at a top academic university. There’s absolutely no way she could be maintaining the same training regimen she was pre-Olympics (the regimen that made her a silver medalist and 15:23 miler). For lots of swimmers, college swimming is a step up from club intensity-wise, but for Erica, it’s probably in many ways a step down. PLUS she is taking in-person classes for the first time after a few years away from school and trying to balance that with swimming + social life. If she gets anywhere near that 15:23 at NCAAs I’d… Read more »

Thank you. Somehow situational influence is never considered around here, other than taper taper taper.

There is a huge disconnect when relating Sullivans performance to Carols coaching. Does she even coach the distance group? Having detailed her exhaustive training regimen for the Tokyo runup would you say that 9 out of 10 college coaches would be able to take over what Aitken built and coach her to victory in the 1650 this year? I would. So if Texas fails it should be noted as such. The other thing is the swimmer has to own their performance also so if she took too long a break or overly cut back her training then that result is partly on her

I like how Taa finally gets around to acknowledging that the swimmer himself or herself also has a little something to do with performance and results, almost as an afterthought…

I clearly can’t speak for all top college programs, but many have 30+hr training weeks, 10k practices, holiday training trips, etc and the athletes are absolutely able to maintain that along with academic requirements. I’d say the social changes can be way more challenging – or different – than the academic requirements. Sandpipers has been a very successful club, and their swimmers have often had very successful college swimming careers as well. Not sure why Sullivan should be expected to regress. Have faith – these are amazing athletes and people.

Why do my comments continue to say “waiting for approval”?

Because they have not been approved yet!

It’s very unlikely. But Carol is to blame if Erica underperforms. It’s almost impressive how bad of a coach she is relative to her recruiting skills.

So Sullivan could win, and pull Pfeifer and Weyant along with her to a 1-2-3 finish from the morning heat. And there are a few others in the morning heats who could well go sub 15:50 and place too. That’s one 2nd to last heat of a 1650 that will be well worth watching. Looks like this is one of many events this year that will be a great race.

If Texas can’t get a silver medalist to victory in this weak event they have a coaching problem that or Sullivan is phoning it in this post Olympic year.

Stole the words out of my mouth, I should have read this before I commented.

Joanna Evans and Evie Pfieffer both improved their 1650 times under the coach. Many swimmers took time off after the Olympics