2022 U.S. Trials: Day 4 Swims You Might Have Missed or Overlooked 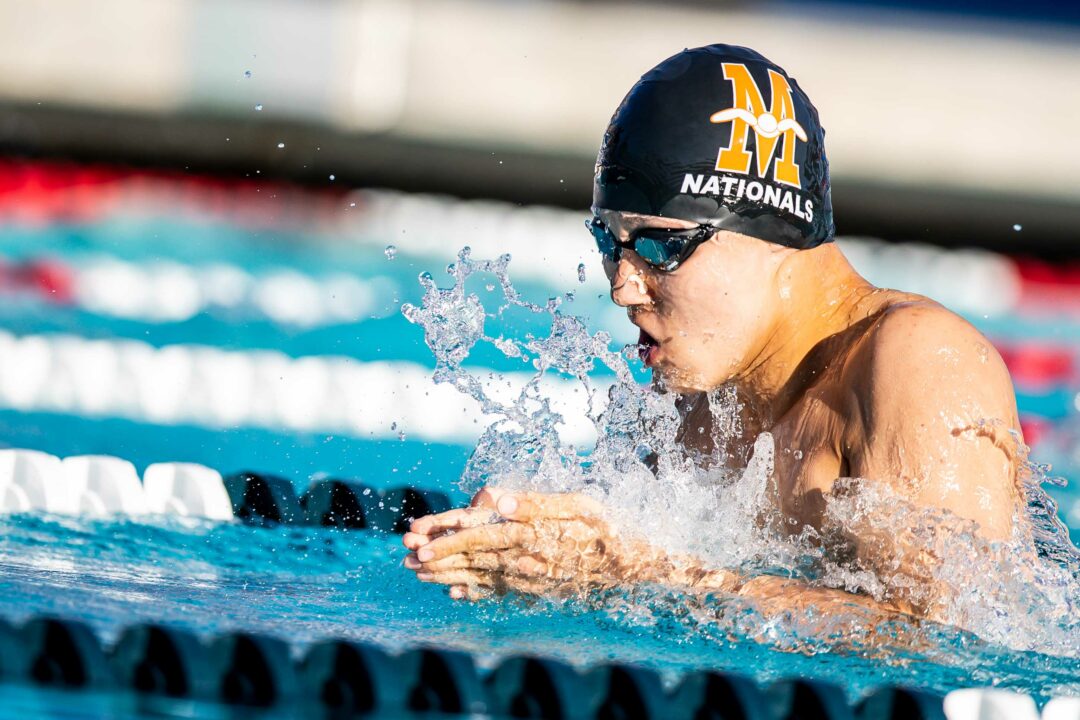 In prelims, Metroplex Aquatics 18-year-old Zhier Fan posted a massive personal best of 1:00.64 in the men's 100 breast, qualifying him for the 'A' final. Stock photo via Jack Spitser/Spitser Photography

If you’ve been following along with our coverage of the 2022 U.S. International Team Trials, you know that in these “swims you may have missed” posts we’re examining some of the great swims put up at that meet, which didn’t involve the top finishers, and therefore didn’t receive much spotlight. This post is focused on such swims from day 4 of the meet.

Winning the ‘C’ final was Sarasota 16-year-old Addison Sauickie, who broke away from the field, touching in 4:13.64. The swim wasn’t a personal best for Sauickie, who swam a 4:13.54 last summer, although it’s still noteworthy that Sarasota Sharks teens won both the ‘B’ and ‘C’ final tonight.

In the men’s 400 free, Tsunami Swim Team’s Alec Enyeart took the ‘B’ final in 3:50.18. Enyeart has been on a great trajectory over the past year, steadily dropping time in all his freestyle events. The performance in the 400 free tonight marked a new personal best for the 18-year-old by over 3 seconds. His previous best was a 3:53.47, which he swam at the Westmont Pro Swim Series in early March, then he swam a 3:53.06 in prelims this morning before posting his 3:50 in finals. With the swim, Enyeart has moved up to #13 all-time in the 17-18 boys age group in the event.

In the women’s 100 breast, Elmbrook Swim Club’s Lucy Thomas took the ‘C’ final in a new personal best of 1:08.98, dipping under 1:09 for the first time in her career. She led Swim Atlanta 16-year-old Katie Christopherson into the finish. For Christopherson, who finished in 1:09.03, it marked her first performance under 1:10 in her career. Thomas has moved up to #16 all-time in the 15-16 girls age group, while Christopherson is now tied for #18.

In prelims, Metroplex Aquatics 18-year-old Zhier Fan posted a massive personal best of 1:00.64 in the men’s 100 breast, qualifying him for the ‘A’ final. Although he was slower in finals, swimming a 1:01.38, that swim would still stand as his 3rd-fastest performance of his career. Fan has been dropping copious amounts of time in his LCM breaststroke races since last summer, and with the performance in prelims, he’s moved up to #7 all-time in the 17-18 boys age group. He now sits less than a second of Michael Andrew‘s 17-18 NAG of 59.62, which has stood since the 2016 Olympic Trials.

Coronado Swim Team 16-year-old Nick Mahabir clocked a 1:01.71 to finish 7th in the ‘B’ final of the 100 breast. The swim marks a new personal best for Mahabir, who had previous been 1:01.92 at the Fran Crippen Swim Meet of Champions at the beginning of the month. Mahabir moved up to #4 all-time in the 15-16 boys rankings with his finals swim, as the U.S. continues to develop young breaststrokers.

Carmel Swim Club 17-year-old Berit Berglund nearly broke 1:00 for the first time in her career in the women’s 100 back, winning the ‘B’ final last night. Berglund entered the meet with a best time of 1:00.96, which she had swum at last summer’s Olympic Trials. With the swim, Berglund is now tied with Alex Walsh for #15 all-time in the 17-18 girls age group. Berglund was exceptional on the first 50 of the race, splitting an eye-popping 28.97.