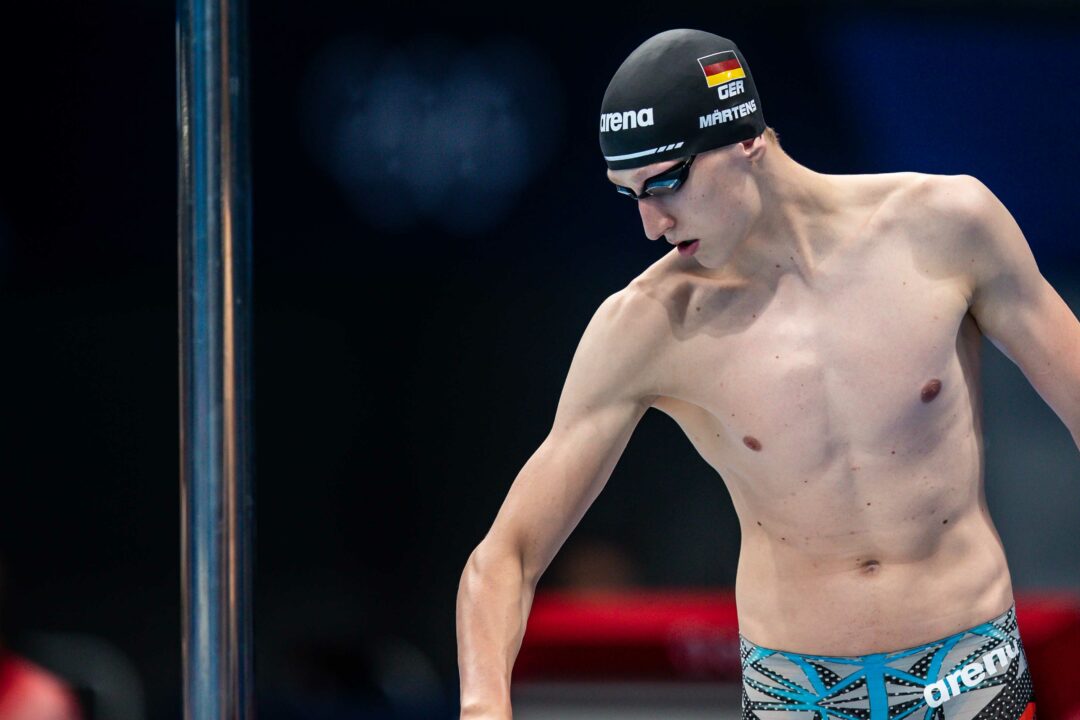 Outside of Martens, this was a shockingly fast field in Erikdalbadet. Coming in 2nd was Felix Auboeck, swimming a 1:46.14, just 0.44 seconds off his own Austrian Record from last year. He now ties for 6th in the world this year. Danas Rapsys finished 3rd in 1:46.43, while Andreas Vazaios was 4th in 1:46.94. Vazaios’ time marks a new Greek Record, downing the previous mark of 1:47.48, which Vazaios himself set in 2017.

All 4 swimmers cracked the top 18 in the world this year. You can view the world rankings below:

Additionally, Daniel Wiffen came in 3rd with a 15:02.78, breaking his own Irish Record by 5 seconds. The previous record stood at 15:07.69, a time which he swam at the Tokyo Olympics last summer.

Sarah Sjostrom was cooking in the women’s 100 fly today, swimming a 56.70 to narrowly beat out Louise Hansson (56.89). Sjostrom used her speed to her advantage, getting out to a 26.65 on the first 50, 0.36 seconds ahead of Hansson. The swims are season bests for both women, putting Sjostrom #2 in the world this year and Hansson tied for #3.

In the women’s 50 breast, Anastasia Gorbenko led Ruta Meilutyte into the finish, touching in 30.45 to Meilutyte’s 30.57.

Robert Glinta was exceptional in the men’s 50 back tonight, swimming a 24.49 to win the race, breaking the meet record in the process. With the performance, Glinta grabbed the top time in the world this year by a huge margin.

Is there race footage of him from this weekend or the 14:40 anywhere?

My friends are at that meet

A couple of years ago, the sport of ski jumping experienced an epidemic of athletes losing bodyweight to gain an advantage. At one point, it developed into a medical issue. In swimming, there’s tons of research on the subject of lean body mass. Last year I’ve noticed how swimmers in a couple of events are getting leaner and leaner. I’m not saying this is an issue just yet, but I wouldn’t be surprised if future winners of these events have a BMI of way under 18. What happens when a 6’3 swimmer weighs in at 143 lbs and sets a new world record?

Makes sense, but only in endurance events. Just look at athletes like Mo Farah or Therese Johaug. Probably makes his world-leading 200 free even more impressive.

I don’t think we’ll see anything like that in a sport where fat mass can literally help maintain higher body position. For shorter distances athletes need enough muscle to create propulsion, for longer events intramuscular fat is an important energy source while racing and training.

There’s an argument to be made for the long axis strokes that a slighter athlete like Kolesnikov, Rylov, Popovici, or Duncan Scott is going to be able to move more efficiently and fatigue less quickly, but there’s a massive genetic component to that, and many athletes would be bad if they tried to copy that build. At the end of the day everyone has to individualize their approach.

He is entered in the 100 back today, will be Interesting to See what he can do there if he actually swims it. Sub 55 should be possible But that is an irrelevant time at World Stage so not Sure what his thinking is. Maybe he swims ist just for Fun. Personally i would have preferred to See him in the 100 free.

Also: Probably Doesnt Happen too often on the Mens side that someone is Ranked First in Four different olympic events/Top 3 in Five different Olympic events.

In the past few years, the 200-meter freestyle has been speeding up like crazy.

I thought that was yesterday

There are always doubters after the first big one.

Kind of reminds me of Thorpe or yang just slightly older. What will really nail it is if he goes the #1 time in the world in the 800 tomorrow.