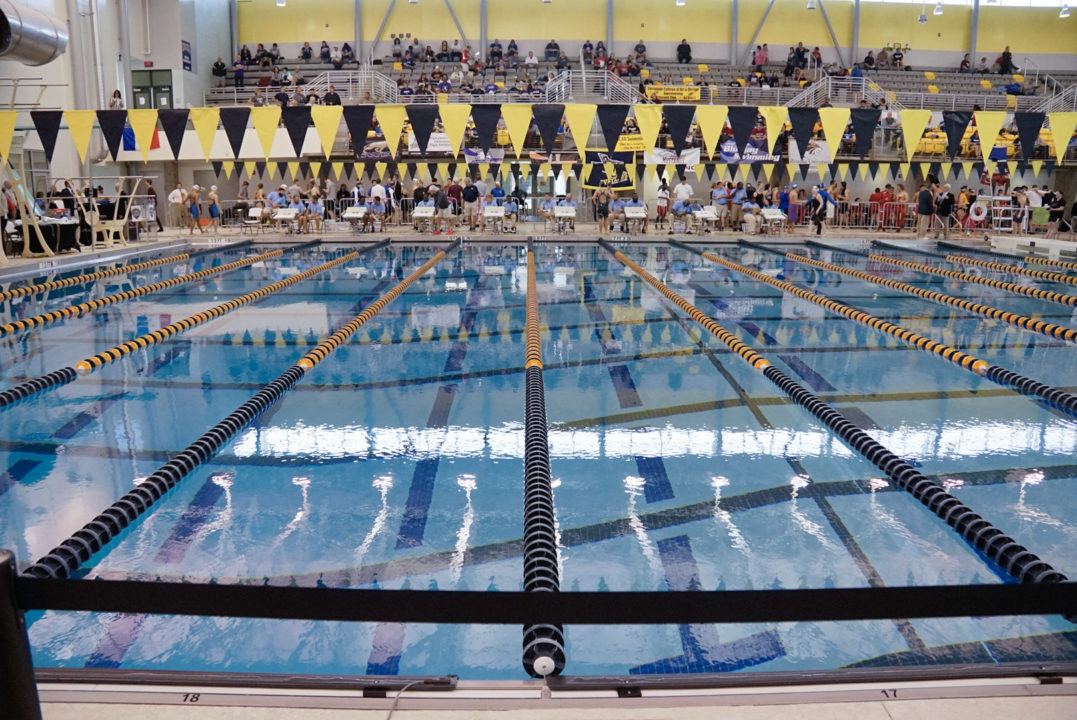 It's a wrap on Day 2 prelims at the 2022 NAIA National Championships in Columbus, Georgia. Stock photo via Julie Ray

Thursday morning at the pool means it’s time for prelim heats. This morning will be the 500 freestyle, 200 IM, and 50 free as the swimmers vie for an invitation back to do it all again tonight and earn some coveted points for their schools.

This is also where some strategy comes into play as the top-seeded swimmers try to balance swimming fast enough to make finals without expending all their efforts in the morning. Meanwhile, the lower seeded swimmers are giving everything to steal away a spot in the final rounds or at the very least, end their season with a best time.

In the 500 free, both top seeds (Marine Lecomte of Keiser and SCAD’s Joel Thatcher) look to have a comfortable cushion on the psych sheet with advantages of five and six seconds respectively, but we’ll see how the morning swim treats them. The Women’s 200 IM seems pretty straightforward, but returning champion and meet record holder Isabella Song (SCAD, Jr) is sitting sixth in the rankings, so it’s safe to assume she figures to threaten top seed Camryn Hudson from Keiser.

On the men’s side of the 200 IM, the psych sheet is stacked with a trio of Keiser freshmen with sub 1:50s led by Marti Ranea Vila, who may very likely challenge the meet record tonight. Milligan’s Stephen Gilbert sits in fourth with the only other time below 1:50, followed by a wide-open field. And then there’s the 50 free – the speed rounds – and based on the seedings, these are both up for grabs. Two SCAD seniors, Anna McGinty and Sloan Sizemore headline the women’s group followed closely by Hanne te Velthuis of Cumberlands. For the men, seniors Alberto Garcia (Keiser) and Enzo Esteves (Cumberlands) share the top seed of 20.11, followed by Scott Cain (Midland) and another tie between West Virginia Tech’s Donat Fabian and Keiser’s Emerson Zaplatar. One thing is for certain: No Blinking Allowed.

Heat one featured six swimmers and the big story is Milligan’s Tyler Cates, who dropped 6 seconds to win the heat. Her time of 5:15.39 is shy of the 16th seed (5:13.84) but she may sneak into the B finals if things go her way.

Heat two began the circle-seeding and was controlled by SCAD freshman Haley Vanbuskirk, who claimed the win with a 5:08.15. The heat’s top seed, Gabby McPherson (Milligan) finished third with a 5:12.02 behind Carley Logan of Olivet Nazarene, who touched in 5:11.17. The next heat featured a bit of a battle in the middle lanes as Alexandra Pecore (Cumberlands) eventually out-touched SCAD’s Emily Elz by 0.4 to claim the win. Both swimmers eclipsed Vanbuskirk’s time from the previous heat and should be safely in the A final.

In the final heat, top seed Marine Lecomte led the way with a 5:03.76 that will secure her the top seed tonight. She will be joined by Annamaria Lowary (Midland) and Stefania Sofouli (Keiser), who finished second and third in the heat.

St. Ambrose’s Leo Edwards claimed the first heat by dropping a second and a half from his seed time and setting today’s standard of 4:50.59. Heat two was circle-seeded and saw the top three seeds finish 1-2-3 as Keiser’s Max Miller led the way with an impressive 4:31.63. He was followed by Sebastian Escobar (Campbellsville), who dropped over six seconds to most likely sneak into the A final, and Fabio Martin Rojo (Lindsey Wilson).

No one in heat three displaced Miller’s top time, but SCAD’s Kristof Monori took first place ahead of John McDonald (Cumberlands) and Mikolaj Synowiec (Bethel). The final heat featured Joel Thatcher, who easily defended his top seed by turning in a 4:28.03. Keiser’s Haakon Syrrist came in second place followed by Oier Fernandez of St. Thomas, who swam his way up from the thirteenth position into the A final with a 4:37.75.

Top time out of the opening heat came from SCAD’s Allie Rassenfoss as she posted a 2:12.17 which is good enough to final based on the psych sheet. The other Allie in the heat, Lindsey Wilson’s Allie Rutherford also has an outside shot at making finals with her 2:13.45. Heat two featured Isabella Song (SCAD) who finished first with a 2:07.29, which is still a way off of her record, so perhaps she’s saving some for tonight’s swim. Second-place honors initially went to Keiser’s Alexandra Giourtzidou, but her 2:09 was erased due to a disqualification (delay initiating turn). Maria Basto from Cumberlands claimed second place instead.

In the third heat, Keiser’s Ori Freibach attempted to claim the top time of the day, but fell a little short with her 2:07.83. Allison Pearson (Olivet Nazarene) and Ella Chaisson (Westmont) rounded out the top three from the heat.

The final heat featured top seed, Camryn Hudson and she, too, just missed unseeding Song for the top seed tonight, but her 2:07 34 puts her safely in second and should make for an exciting matchup tonight. Halle Briner (Olivet Nazarene) and Leyre Antonanzas Fernandez (St. Ambrose) also join the A final, finishing second and third here.

Daniel Chevere (SCAD) opened up the men’s 200 IM with a 1:57.36 in the first heat. Based on the psych sheets, swimmers will likely need to hit a 1:55 or better to come back tonight. The second heat produced a potential finalist as Liam Kuiper of Olivet Nazarene touched out in a 1:55.39 to up the ante. We’ll see if that holds up.

Heat three opened up the circle seeding and Flynn Kunze (Keiser) threw down a time of 1:49.20 to lead the way and reserve a spot in the A final. Inigo Marina (St. Thomas) finished in second and SCAD senior Brandon Vives dropped 4 seconds to touch third with a 1:52.28 which may just move him all the way up into the A final from his 21st seed on the psych sheet.

Heat four finished with another Keiser win as Alex Kusik punched in with a 1:50.98. Second place went to Ruben Gonzalez De Oliveira of Cumberlands, followed by Life’s Anton Smal, who is probably sitting on the cusp of the A final with his 1:53.21. Zander Livingston, who was seeded second in the heat, fell to fourth and will compete in the B final tonight.

The final heat offered a nice teaser for tonight’s matchups as Marti Ranea Vila and Stephen Gilbert traded positions throughout the race. Gilbert ultimately took the win by 0.09 with a 1:50.60. Kacper Sobieszuk (Cumberlands) finished third here and will join them in the A final tonight.

Lindsey Wilson’s Annissa Koekemoer had the honor of setting the first “time to beat” standard of the day for the women’s 50 free. She took heat one with a time of 24.81. Heat two allowed Rebecca Loftus (Cumberlands) to lower that time to 24.43, which remained the top time after Westmont’s Bridget Hoth claimed heat three with a 24.72. Then came the circle seeds.

Heat four produced a 24.19 from Keiser’s Danai Sofoulis, as well as a 24.30 from Cumberlands’ Hanne te Velthuis and two 24.36s from Bayley Blackmon (Bethel) and Helina Reyes (Olivet Nazarene).

The next heat raised the bar even higher as SCAD’s Sloan Sizemore took first with a speedy 23.19, followed by Maaike Broersma (Lindsey Wilson) and teammate Spencer Sheridan. Idaho’s Maya Murphy tied Sofoulis’s 24.19 from the previous heat.

Olivet Nazarene’s Demarcus Washington led off with a winning time of 22.00 in heat one of the men’s 50 free. Heat two saw Petter Kolaas of St. Ambrose touch in for the win with a 21.40 and Ethan Kilgore of St. Thomas laid claim to heat three with a time of 21.41.

Freshman Donat Fabian (WV Tech) claimed the victory in heat five with a swift 20.58, followed by Enzo Esteves (Cumberlands), who took second in 20.73.

The final heat secured A-final positions for four swimmers as Alberto Garcia of Keiser took the top seed with a 20.35. Simpson’s Chadd Maurer, Keiser’s Emerson Zaplatar, and Morningside’s Joseph Ciriaco all joined the A final with their swims as well.