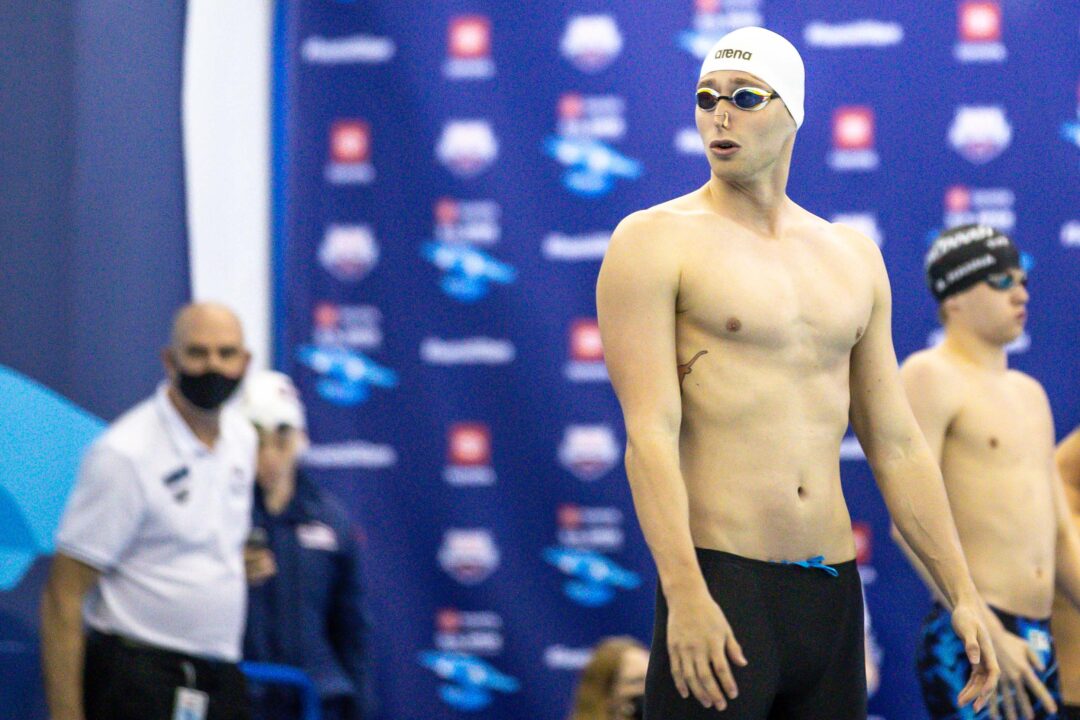 The swim comes in under Stewart’s previous mark of 53.99, which he swam in April at the International Team Trials. Stock photo via Jack Spitser/Spitser Photography

On the 2nd day of the Futures Championships in College Station, Sam Stewart ripped a new personal best in the men’s 100 back, winning the event in 53.84. The swim comes in under Stewart’s previous mark of 53.99, which he swam in April at the International Team Trials. Tonight, Stewart was out blistering fast, splitting 25.81 on the opening 50 before coming home in 28.03.

27-year-old Brett Pinfold tore to victory in the men’s 100 free, clocking a 49.50. That swim comes in just over a second off Pinfold’s personal best of 48.47, which he set at the Olympic Trials Wave II meet last June.

Olympic and World Champs medalist Sydney Pickrem picked up her first win of the meet, taking the women’s 400 IM in 4:43.31. While the overall time isn’t particularly great for Pickrem, her breast split of 1:18.76 was the strong point of the race. Fort Collins Area Swim Team 17-year-old Lucy Bell had a phenomenal race to take 2nd in the 400 IM, blazing to a new personal best of 4:44.54. It was a breakthrough swim for Bell, whose personal best sat at 4:49.21, a swim which she posted at the 2019 Summer Nationals when she was 14 years old.

Unattached 15-year-old Maximus Williamson was dominant in the men’s 400 IM, matching his stunning performance from the International Team Trials in April. Williamson swam a 4:20.41 tonight, which comes in just off the 4:20.01 he posted in April. A great backstroker, Williamson swam a very speedy 1:04.08 on the back leg of the race tonight. He was also really solid coming home on freestyle, clocking a 1:01.02 on that split.

The women’s 100 back was won by Highlands Ranch Aquatics 17-year-old Mary Macaulay in 1:02.74. That swim chipped 0.03 seconds off her personal best.