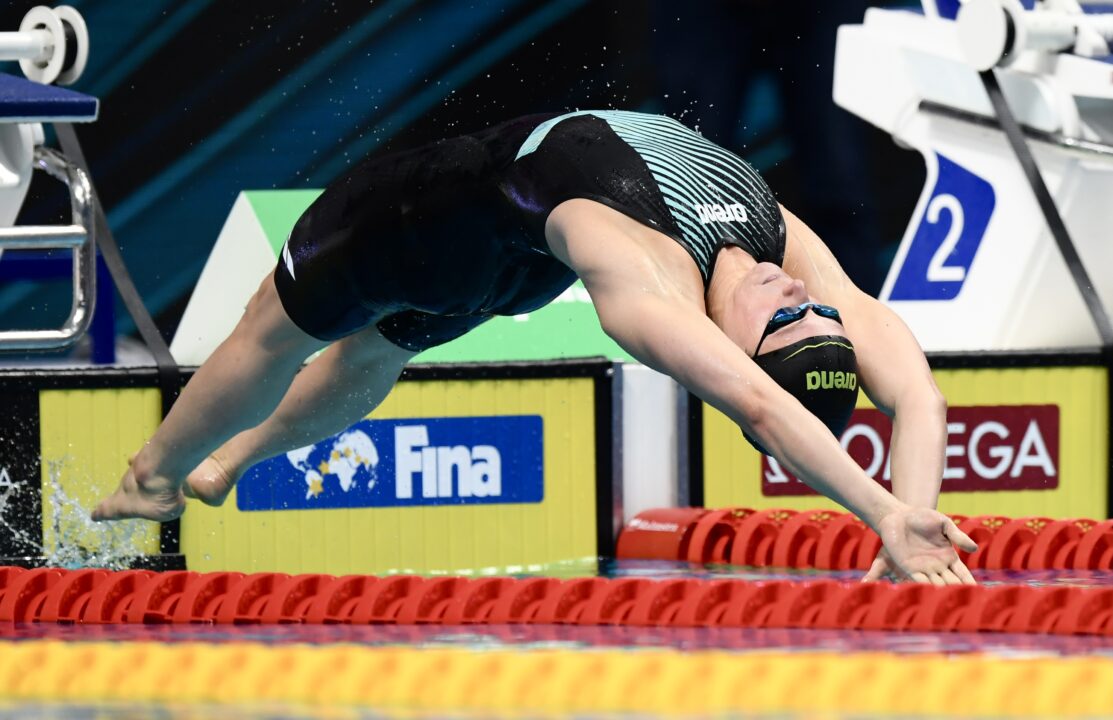 One of the leading backstrokers at these championships is Netherlands' Kira Toussaint, who is the fastest 50 backstroker in European history. Stock photo via Fabio Cetti

The women’s backstroke events at the 2022 European Championships don’t feature the trio of Kaylee McKeown (AUS), Kylie Masse (CAN), and Regan Smith (USA), but there’s still plenty of talent, especially in the sprints, to make the races exciting. One of the leading backstrokers at these Championships is Netherlands’ Kira Toussaint, who is the fastest women’s sprint backstroker in European history. The European Record holder in the LCM 50 back, Toussaint stands a good chance of winning both the 50 back and 100 back at these championships.

Italy’s Margherita Panziera is another elite backstroker in this field. Panziera is more of an endurance backstroker versus a sprinter, and she’s the defending gold medalist in the 200 back. Panziera hasn’t quite been on her best time performances so far this year, but in the event she’s down at those times this week, we could see a thrilling race between her and Toussaint in the 100 back.

Many of the backstrokers at this meet have swum their lifetime bests this year, making it all the more exciting to project performances. The backstroke events also feature a really nice mix of veterans and young up-and-coming teenagers.

This field features European Record holder and defending European champion Kira Toussaint. The fastest women’s sprint backstroker in European history, Toussaint enters these championships as the top seed, entering at 27.22. She’s been as fast as 27.10, a time which she swam in April of 2021. She wasn’t quite as fast at the 2020 European Championships (which were held in May of 2021), where she won gold in the event at 27.36.

Although Toussaint is the European Record holder and enters as the top seed, it’s far from a given that she’ll win Gold here. Her main challenger looks to be France’s Analia Pigree, who swam her personal best of 27.29 at the World Championships less than 2 months ago. The LCM 50 back is Pigree’s top event, and we can count on her for a good performance in Rome.

19-year-old Medi Harris out of Great Britain has had a fantastic season this year, and consequently comes into the meet as the #3 seed in the 50 back. Harris swam her personal best of 27.56 at the World Championships in June. The time came in a swim-off to qualify for finals. She would go on to take 7th in the final, swimming a 27.72. Harris has swum lifetime bests in the LCM 50 free, 100 free, 200 free, 50 back, and 100 back already this year, so keep an eye on her at these Championships.

French 16-year-old Mary-Ambre Moluh is seeded 4th with her lifetime best of 27.63, a time which she swam in May. She comes in as the youngest swimmer in the field, but even so, she stands an excellent chance of medaling here. Moluh has been quite consistent in the 50 back so far this year. She swam a 27.95 in February, 28.15 in March, then a 27.70 in April, and her lifetime best 27.63 in May. Moluh also performed extremely well at the French National Championships in April, swimming lifetime bests in the 50 free, 100 free, 50 back (at the time), and 100 back.

Italian 27-year-old Silvia Scalia is another swimmer in this field who swam her lifetime best this year. Scalia posted her personal best of 27.65 at the World Championships in June. She also swam a 27.79 earlier in the year at the Mare Nostrum tour stop in Barcelona. Scalia is purely a sprint backstroker, so we’ll be looking out for her at these Championships.

Dutch 25-year-old Maaike de Waard swam her personal best of 27.69 at the 2020 European Championships, which were held in May of 2021 due to the Coronavirus global pandemic. She was just off that time at the 2022 World Championships in June, where she posted a 27.77 in the event. At the Swiss National Championships a month ago, de Waard clocked a 28.12.

We should begin this preview with a recap of the 2020 European Championships 100 back. Great Britain’s Kathleen Dawson was dominant in the event, leading the field in all 3 phases. Dawson would crack the European Championships Record in the semifinals, swimming a 58.44. She then went on to post a 58.18 in finals, smashing the record yet again. The time ultimately didn’t stand, however, as there was an error with the timing system which resulted in not all swimmers in the final hearing the starting beep. As a consequence of that, the results from the final were voided, including the times, so Dawson’s record swim didn’t stand. They re-raced the final later, seeing Dawson win again, this time in 58.49.

Dawson isn’t in the field, however, leaving Kira Toussaint as the top entrant. Toussaint was originally the 2nd place finisher in the first run of the final at the 2020 Championships, swimming a 59.02, but in the re-race, Toussaint fell to 4th, clocking a 59.32. She comes into the meet with the fastest personal best in the field, coming in at 58.65, a time which she swam last April (2021). She’s been under 59 seconds on a number of occasions, but she hasn’t hit that mark yet this year. Toussaint notably made a change of training base, moving back to Knoxville, TN in the USA to train under Matt Kredich. Toussaint was a star swimmer for the University of Tennessee for two seasons before she turned pro and moved back to Europe.

Toussaint competed at the U.S. Nationals a few weeks ago, clocking 59.24 in the 100 back to finish second. We should keep in mind that it’s probably Toussaint is targeting European Championships as her peak meet of the summer, so she may not have been completely rested for U.S. Nationals. Regardless, even the 59.24 would stand a good chance of winning a medal at these Championships.

Behind Toussaint on the entry list is Italy’s Margherita Panziera, who enters at 59.01. Although primarily a 200 backstroker, Panziera has plenty of speed to make her a huge threat in the 100 back as well. She’s been as fast as 58.92, a time she swam at the 2019 Italian National Championships and stands as the Italian Record. She’s been off her personal bests so far this year, however. At her two biggest meets of the year so far, Panziera hasn’t gotten under 1:00 in the 100 back in either. At the Italian National Championships in April, the 26-year-old swam a 1:00.25. Then, she went to the World Championships in June, where she clocked a 1:00.26 individually, and a 1:00.35 leading off Italy’s medley relay.

Great Britain’s Medi Harris will be looking to continue on her great season thus far, which has seen her swim lifetime bests in the 50 free, 100 free, 200 back, 50 back, and 100 back. She swam her personal best of 59.24 in the 100 back in February at the McCullagh International Meet in Ireland. She’s been off that time since then, but not terribly so. At the British National Championships in April, she swam a 59.95. She then went to the Mare Nostrum Tour stop in Canet, where she swam a 1:00.27. At the World Championships, Harris swam a 1:00.01.

Maaike de Waard also swam her personal best in the 100 back this year, having clocked a 59.62 in Germany in April. Like Harris, she’s been off that time since then, however. She was a 1:01.14 at the Mare Nostrum Tour stop in Canet, then swam a 1:00.15 at the World Championships in June. At the Swiss National Championships a few weeks ago, de Waard swam a 1:00.91.

Polish 24-year-old Paulina Peda swam her personal best of 59.75 at the Polish Open in May. She then clocked a 1:00.88 at the World Championships, and a 1:01.70 at Greece’s National Open Swimming Championships just 2 weeks ago. Swedish sprinter Louise Hansson clocked a 59.83 at the Stockholm Open in April. Hansson has swum lifetime bests in both the 50 back and 100 back already this year. She didn’t race the 100 back at the World Championships, but she did swim it at the Mare Nostrum Tour stop in Canet, but clocked a fairly lackluster 1:02.01.

Italy’s Margherita Panziera is the top seed in the women’s 200 back by a wide margin, and she’s not even entered with her lifetime best. Panziera’s personal best sits at 2:05.56, a time she produced at the 2021 Italian National Championships, which took place in March of 2021. She’s entered at 2:06.08, the time she swam at last year’s European Championships to win Gold.

Hungarian youngster Dora Molnar, just 16 years old, enters as the #3 seed at 2:09.34. Her time is also her lifetime best in the event and was swum at the Hungarian National Championships in April. Molnar has had an excellent year so far, already having swum lifetime bests in the LCM 100 free, 200 free, 50 back, 100 back, 200 back, and 100 fly. She was just off her personal best in the 200 back at the World Championships in June, swimming a 2:10.08.

Fellow Hungarian Eszter Szabo-Feltothy also swam her lifetime best of 2:09.62 this year. Her time came in May, at the Barcelona stop of the Mare Nostrum Tour. Just two days after that performance, she swam at the Canet stop of the tour, racing to a 2:10.98 that time.

Italy’s Federica Toma just swam her lifetime best of 2:09.76 a few weeks ago in Italy. The swim marked her first time under 2:10 in the event, and having come so recently, it gives her quite a bit of momentum heading into these European Championships. Spain’s Africa Zamorano is tied with Toma for the #5 seed, coming in with the time she swam at last year’s European Championships from May of 2021. Her lifetime best is slightly faster, coming in at 2:09.35 from December of 2020.

Great Britain’s Katie Shanahan is seeded seventh with a 2:09.90, but just clocked a lifetime best of 2:09.22 at the Commonwealth Games roughly two weeks ago. Given this field, if Shanahan can repeat that performance, she shouldn’t have an issue qualifying for the final, and absolutely has a shot at winning a medal.

I’m intrigued to see where Hansson stands given she hasn’t raced this event at a major comp, but I know she’ll most likely scratch the event anyways (100bk heats on same day as 100fly final)…

Dawson broke the British and European records in the 100 back last year at Europeans. She led off the W medley relay in 58.08.