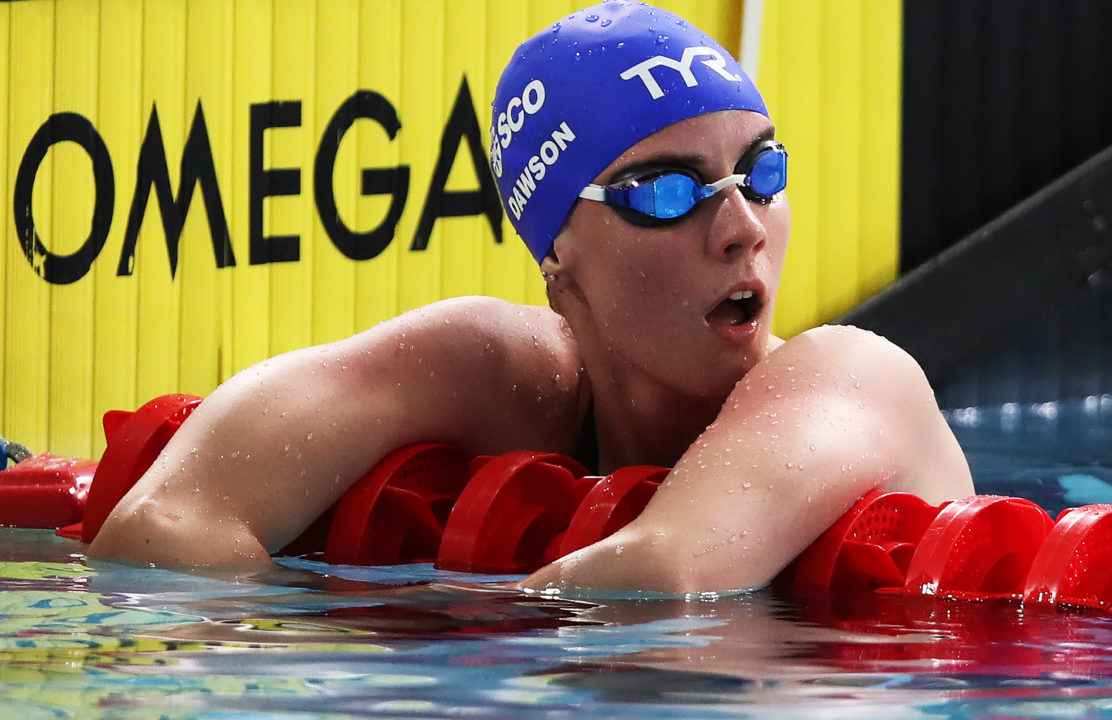 The women’s 100 backstroke final at the 2021 European Championships will be re-swum due to an error with the timing system.

“The Organizers cancelled the women’s 100m back’s result, due to the failure of the timing system,” an official statement said.

SwimSwam received confirmation from the organizers that the times done in the original final are cancelled, meaning Dawson’s 58.18 Championship Record will not hold up. She still holds the record of 58.44 from the semi-finals.

Great Britain’s Kathleen Dawson continued her streak of impressive swimming, firing off the fastest time of her career tonight to take 100m backstroke gold at these European Championships. The ace produced a monster effort of 58.18 to top the podium tonight in the only sub-59 second outing, checking in with a new meet record in the process.

Dawson already gave us a taste of what was about to come with her championships record from the semi-final. Last night the 23-year-old University of Stirling swimmer crushed a mark of 58.44 to rank as the top-seeded swimmer. That already sat just .20 off her own PB of 58.24 that rendered her as the 2nd fastest British performer of all time.

Tonight, Dawson opened in a speedy 27.99 and held on to close in 30.13 to nearly break the British record of 58.12 Gemma Spofforth put on the books at the supersuited 2009 FINA World Championships. As such, with her breakthrough gold tonight, Dawson maintains her position as teh 2nd fastest Brit in history but edges closer and closer to British history with each swim.

With her outing here, Dawson now rockets up the all-time rankings to tie Russian Anastasia Zueva as the 8th fastest performer all-time.

Dawson has been on the elite backstroking scene for a number of years, having dipped under the minute threshold for the first time in 59.68 at the 2016 European Championships when she claimed bronze. She was also sub-minute in 2017 but suffered some injuries that plagued her performances since then.

Before the coronavirus pandemic, in March of 2020, Dawson produced a time of 59.74 as her 2nd fastest time ever as an indication that her body was getting back on track.

Already this year, she posted a lifetime best of 58.24 before tonight’s swim, further moving in the right direction with Tokyo on the horizon. when

The 100 back final is being redone, due to a protest by Sweden.

If only Hansson was affected I would say a re-swim only for her would’ve sufficed. But she said in an interview 4-5 other girls came to her and were confused by the start aswell. Was clearly not a fair race.

Oh man. And to top it off Regan Smith now swims for GBR

Minnesota just was annexed this year…

Minnesota is just starting to thaw out. Regan Smith emerges from a human popsicle to hopefully a Summer Olympian.

Yes, hype-typed too quickly. Fixed, thanks.

Thank you for the updates.

None! 😂. Sorry, I couldn’t help it.
But its gonna be tough to make it to the finals in Tokyo