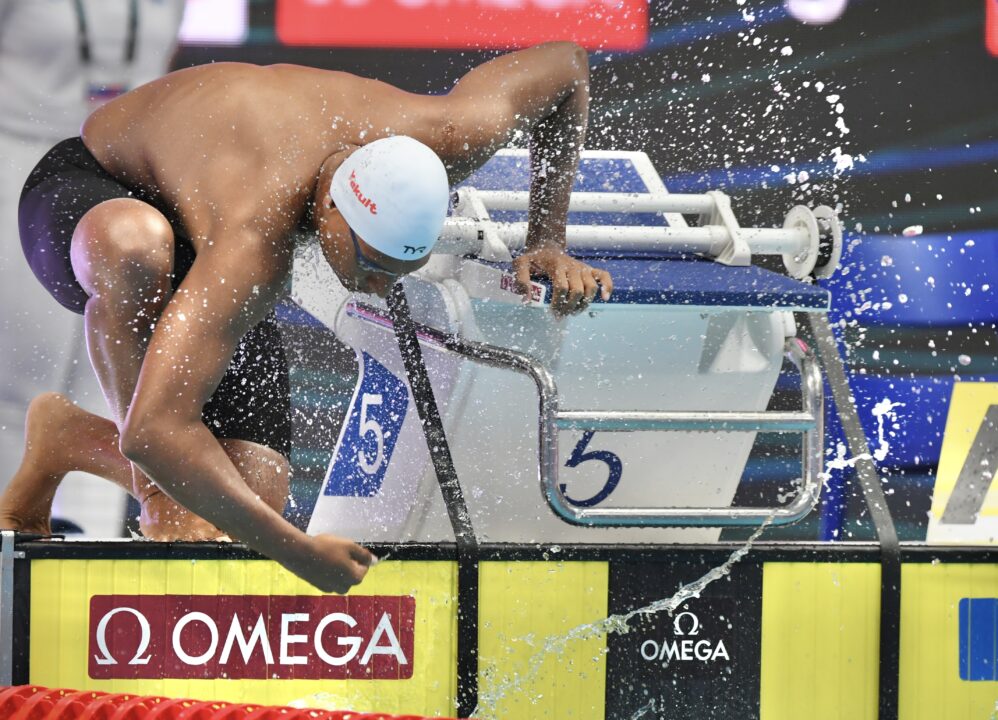 All eyes will be on David Popovici in the men's 100 free at European Championships, where he'll take a run at the world record after posting 46.98 in semis. Archive photo via Fabio Cetti

Switzerland’s Roman Mityukov swam a national record of 1:56.22 to grab lane 4 for the men’s 200 backstroke final. These semis were filled with drama, as Yohann Ndoye Brouard‘s wedge malfunctioned. After a reswim, he qualified second for the final in 1:56.39, joining his teammate Mewen Tomac. Ndoye Brouard has been having a strong season, and that time is less than three-tenths away from his national record. Barring any more drama, he’s put himself in a strong position to medal and take a crack at his French record.

Olympic and Worlds silver medalist Luke Greenbank is running third, having swam 1:57.07. He’s looking to bounce back after a disappointing outing at the Commonwealth Games, where he was leading at the 150m mark but faded over the last 50 meters to miss the podium.

The Hungarian duo of Benedek Kovacs and Hubert Kos could also surprise; in the prelims, Kovacs set a lifetime best of 1:56.81.

Swedish superstar Sarah Sjostrom looks well on her way to her fifth career European title in the women’s 50 fly. Sjostrom won four straight titles in this event before sitting out at last year’s Euros. She clocked 25.10 to lead the semis by over half a second. Right now, it’s less a question of if she’ll win the event than what time she’ll do it in. She won gold at Worlds in 24.95–can she get under 25 seconds here and better that mark?

Three other women broke 26 seconds in the semis, with France’s Marie Wattel leading the way in 25.63. She’s been as fast as 25.56 this year, which is just off her lifetime best of 25.50 from 2019. She leads Maaike de Waard and Louise Hansson. Hansson was just off her personal best of 25.84, which is also from 2019. She’ll likely need to be right on her best again to hold off de Waard and join her teammate on the podium.

All eyes will be on David Popovici in the men’s 100 freestyle. In the semis, the 17-year-old Romanian roared to 46.98, setting new European, World Junior, and Championship records. He used a sizzling back half (24.05) to power himself home, becoming the fourth man to break the 47 second barrier. He’s .07 away from the world record and .02 away from becoming the fastest man in a textile suit. He’s the clear favorite for gold and many will be on world record watch.

He’ll be contending with swimmers who will likely create bigger waves then him, though not all of them are pure sprinters. While Popovici is the man to beat, there’s an interesting battle developing between Kristof Milak and pure sprinters like Alessandro Miressi and Maxime Grousset. Though it was overshadowed by Popovici’s swim in the second semi, Milak dropped a huge lifetime best for the win in the first semi, getting under 48 seconds for the first time with a 47.76.

Miressi was slower in the semis than he was in prelims, where he got within two-tenths of his 47.45 Italian record. He was still under 47 seconds in the semis, and could potentially have a drop lined up as well. Grousset, the Worlds silver medalist, had just swum the 50 fly final prior to the semis–now that he’s safely through, he will challenge Milak and Miressi.

Reigning world champion Benedetta Pilato has led the way through both the prelims and the semifinals. She was faster in the prelims (likely to ensure her spot at night as countries can only qualify 2 swimmers max), but posted a solid 1:06.16 to grab lane 4 for the final. In prelims, Pilato swam 1:05.77, which bodes well for the medal round as she looks to back up her gold medal.

The defending European Champion, Sweden’s Sophie Hansson, will also be in the mix. She moved through to the final in fifth with a 1:06.83. Look for her to try to make a move tonight, though she’ll have her hands full with both Pilato and Ruta Meilutyte. In her comeback season, Meilutyte has been performing well, winning the 50 breaststroke and bronze in the 100 at Worlds. She’ll be in lane 5 as the second-fastest qualifier–and she’ll try to upgrade her medal color from Budapest.

At Worlds, the women’s 100 breaststroke podium was an all-European one, with Pilato, Anna Elendt, and Meiltutyte taking home hardware. However, Elendt isn’t racing in Rome, so the door is open for Hansson and the other women in the field to stand beside Pilato and Meilutyte, or shake up the race entirely.

Shockingly, world record holder and four-time European champion Katinka Hosszu missed the final in the women’s 400 IM. She was the third-place Hungarian, touching in 4:45.07, a relatively pedestrian time for her. And since countries are only allowed to send two swimmers through, she’ll be on the outside looking in to this final.

However, Hungary still has a good chance to end up with at least one swimmer on the podium, as Viktoria Mihalyvari-Farkas and Zsuzsanna Jakabos posted the top two times of the morning. Both swam 4:41s, putting them comfortably ahead of the field. The 18-year-old Mihalyvari-Farkas led her heat from start to finish this morning, looking consistent on all four strokes. In her heat, the 33-year-old Jakabos established herself on the breaststroke leg, so that’s where she’ll likely make her move in the final.

Look for the Brits Freya Colbert and Katie Shanahan to try and move up from their seeds. Shanahan won silver in the 200 backstroke on day 2 in 2:09.26, just four-hundredths off the lifetime best she established at Commonwealth Games. She showed there that she’s right on her best in Rome. In the 400 IM, her lifetime best (also set at Commonwealth Games) is a 4:39.37. She was well off that in the heats with a 4:47.30, but expect her to challenge for a medal.

We’ll be without Florian Wellbrock in the men’s 800 freestyle final, as the German scratched the event, but that doesn’t mean there won’t be fireworks. Over the last year or so, men’s distance events have become increasingly exciting to watch, highlighted by Bobby Finke‘s last 50 and most recently, Gregorio Paltrinieri‘s 1500 freestyle at Worlds. Here, Paltrinieri qualified third in 7:48.91, behind Mykhailo Romanchuk and Lukas Märtens. Expect both of those men to speed up tonight, though it will be interesting to see if tactics change without some of the usual competition in the mix.

The pressure was on the Italians in the prelims, as there were four men capable of finaling, but only two spots available. 16-year-old Lorenzo Galossi joins Paltrinieri in the final after negative splitting his prelims swim of 7:49.08. He might take a different strategy in the final, but if he doesn’t, the big medal threats will still have to negotiate a potential last minute surge, even without Finke in the race.

With only eight teams entered in the women’s 4×100 freestyle relay, we’ve bypassed prelims and gone straight to finals. That means that our first look at these relays will be with their A-teams, though through the first two days of competition, we’ve got some idea of what’s likely to go down in the final.

Coming into the meet, it looked like Great Britain was the team to beat, though that’s changed somewhat. The Dutch women have been swimming incredibly well, and Marrit Steenbergen has been clutch on every relay she’s swum so far in Rome. That momentum makes them incredibly dangerous, and it’s possible we could see them snag another gold to match their win in the 4×200 free relay from earlier.

This isn’t to say that the Brits are out of the race entirely, but given their form after Worlds and Commonwealth Games, they might not be able to hold off a surging Dutch team. Powered by 16-year-old stars Nikoletta Padar and Dora Molnar, Hungary is also capable of earning a spot on the podium. Sweden is a dark horse, especially with Sjostrom bypassing the individual 100 free. However, if she’s on the relay, the Swedes could also surprise for a medal.

Tonight should be good

The article reads “ The 33-year-old Mihalyvari-Farkas”. But she is 18.

This will be a great finals session – Popovici WR watch, a really fun and competitive women’s 100 breast, and I hope Greg goes for it in the 800 like he did in the 1500 at Worlds.