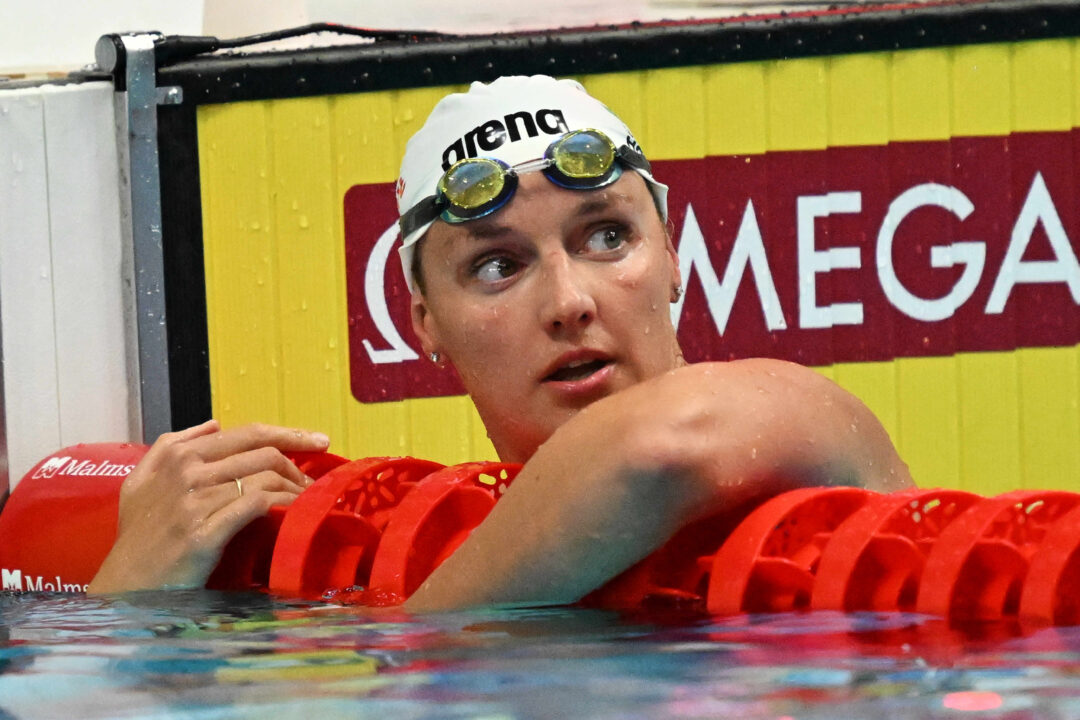 Katinka Hosszu has lost the 200 IM European title for the first time in more than a decade last year, and has a chance to get it back this year in Rome. Current photo via Gian Mattia D'Alberto/LaPresse

Katinka Hosszu has long been the dominant force in Europe in the women’s medley events, but that reign was disrupted last year in Budapest when the Iron Lady lost her 200 IM crown for the first time in a decade.

Prior to that race, Hosszu did return to the top of the heap in the 400 IM, winning her fourth career gold in the event after sitting out in 2018.

This year, the question becomes whether or not Hosszu can put it all together one more time and fend off the next generation. Can she reclaim the 200 IM title for her sixth gold? Does she have what it takes to repeat in the 400 IM at the age of 33?

Given the lack of a true breakout star in Europe in the women’s medley scene, her odds are pretty good.

And with this potentially being her last European Championships in the long course pool, we know she’ll have a bit of extra drive.

After falling to a swimmer 14 years her junior, it would be easy to look at last year’s European final of the women’s 200 IM as a true passing of the guard. For as great as she had been for so long, it looked like Katinka Hosszu‘s time atop the sport was coming to an end.

And while that may be true in a best-on-best competition like the World Championships, Hosszu is still a very real threat for gold at Euros.

At the 2022 Worlds, Hosszu and the woman who won gold at last year’s Euros, Anastasia Gorbenko, were the only two European swimmers in the 200 IM final, making them the frontrunners to be fighting it out for gold in the final once again.

Gorbenko (2:10.23) and Dutchwoman Marrit Steenbergen (2:10.60) swam their fastest times of the year in the World Championship prelims, while Hosszu swam her season-best of 2:10.72 in the semis to squeak into the final in eighth over Switzerland’s Maria Ugolkova (2:11.06).

Gorbenko and Hosszu were a bit off in the final, both in the 2:11-range, and it doesn’t look like anyone in the field has much more than a 2:10 in them at this point. With that, it looks like the final will end up similar to last year, with a number of women in the fight coming down the last 25 meters of freestyle.

2021 silver medalist Abbie Wood will not be racing after taking on the Commonwealth Games last week, meaning that we’ve got Gorbenko, Steenbergen, Hosszu, Ugolkova and Italian Sara Franceschi as the only swimmers in the field sub-2:12 in 2022.

Gorbenko has been in the 2:10s five times this year, and prior to Worlds back in May, Hosszu also had a 2:10.75 swim on the Mare Nostrum Tour.

We wouldn’t put it past Hosszu to find something special to pull this out, and it should be incredibly close, but Gorbenko’s consistency gives her a slight edge.

Steenbergen, 22, has been on a tear of late, producing the seven fastest swims of her career this year, though that only includes two swims sub-2:12.

Ugolkova and Franceschi haven’t been as good as last year but should still factor into the bronze battle, with the rest of the field looking a little thin.

Though a podium finish looks like a stretch, it is good to see Spain’s Mireia Belmonte, the 2008 champion in ths event, back in the field. She swam 2:14.77 in late July, and may only need to be two seconds or so quicker to crack the top eight.

It seems almost counterintuitive that an aging swimmer like Hosszu has a better chance of winning the 400 IM over the 200 IM, but just like last year when that’s what ended up happening, it’s the case again in 2022.

The reason seems to be the talent gap Hosszu has over the rest of the field.

For example, at the 2022 World Championships, she was more than 11 seconds slower than her best time but still finished fourth. While muscular endurance may have diminished, her talent level still suffices in an event where no one in Europe has been able to come anywhere near Hosszu’s peak in the mid-2010s, and thus, her current ability is still at or near the best in the field.

Although she was only 4:37-high at the World Championships, Hosszu did clock an impressive 4:35.95 on the Mare Nostrum Tour in late May, making her the fastest European in 2022.

Right now it looks like her main challenger for gold will be fellow Hungarian Viktoria Mihalyvari-Farkas, who broke through with a 4:35.99 showing last year to make the Olympic final at the age of 17.

At the World Championships this year, she was a bit off in 4:41.16 to place ninth, but could easily rebound given her youth and talent level, though she’ll need to be on her toes in the heats with the presence of a third Hungarian, Zsuzsanna Jakabos (only two per country make the final).

With Mihalyvari-Farkas taking ninth, Hosszu was the only European woman in the World Championship final this year. Behind the Hungarians, the next-highest finisher from Europe was Great Britain’s Freya Colbert, who was 12th in 4:45.55.

Colbert and fellow 18-year-old Brit Katie Shanahan both registered lifetime bests at the Commonwealth Games a week and a half ago, with Shanahan winning bronze in 4:39.37 and Colbert placing fourth in 4:39.80. That type of form could be enough to put them on the podium at Euros given the uncertainty surrounding some of the top seeds.

The second-ranked swimmer coming in is Spaniard Mireia Belmonte, who got down to 4:35 last year at the Olympics but hasn’t broken 4:50 in 2022.

Italian Ilaria Cusinato, the 2018 runner-up, has been consistently inconsistent and only has one long course 400 IM, a 4:50.76 in May, under her belt this year. Her teammate Sara Franceschi has reeled off a trio of 4:40s this year, including winning the Mediterranean Games title in early July (4:40.86), which makes her a contender.

The other notable name to mention is Jakabos, who is another 33-year-old veteran who has been there done that, including winning a medal in this event in 2010, 2012 and 2016. Chances are she’ll get bumped from the final even if she posts a top-eight time with Hosszu and Mihalyvari-Farkas in the field, but she was 4:41.5 in May and could sneak in if Mihalyvari-Farkas isn’t on form.

most versatile swimmer of all time

4:35.95 is #5 so far this season and can be enough for the win.
Only McIntosh, McKeown, Grmes and Ledecky ( 😀 ) were faster and they are not swimming at Euros.