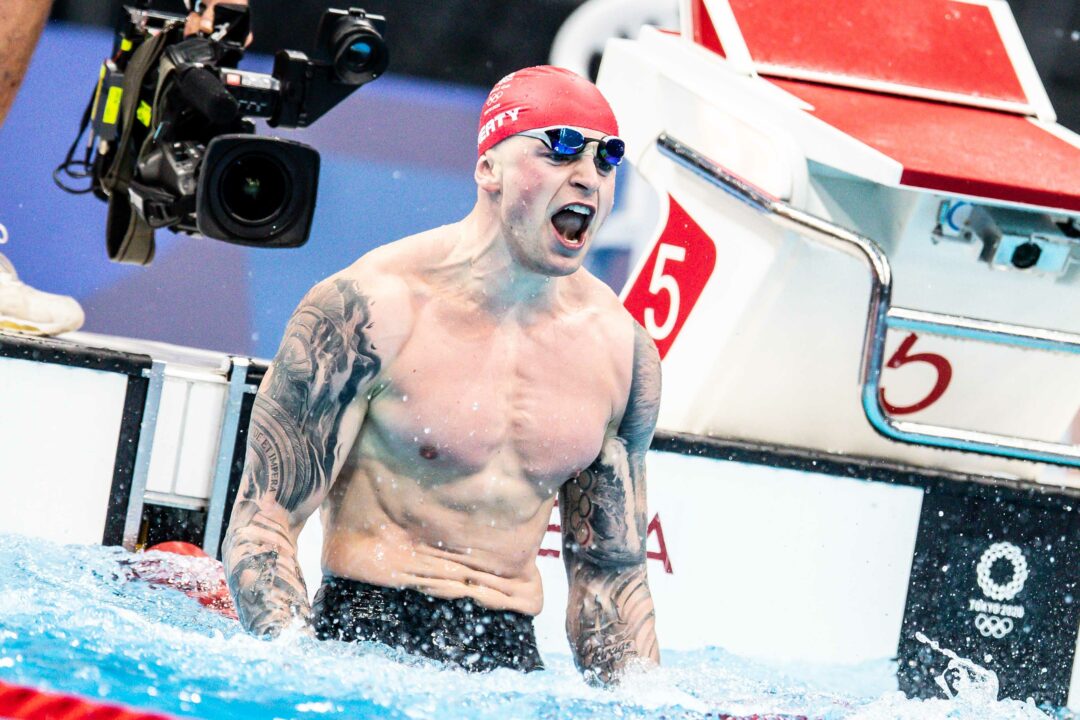 World record holders Adam Peaty and Zac Stubblety-Cook will be the heavy favorites in the breaststroke events at the 2022 Commonwealth Games. Archive photo via Jack Spitser/Spitser Photography

Everyone knows that Adam Peaty is the king of sprint breaststroke. He’s the 50 and 100 breast world record holder and has been winning those races since 2014. Although, this year has been a more challenging year than others, as he was forced to skip World Championships due to a foot injury. That doesn’t appear to faze Peaty for the Commonwealth Games though, as he said in a recent interview with BBC Radio 5 Live that the broken food was the “best thing that happened to [him]” and that “[he] believes from the bottom of his heart that world records can be broken again.” So Peaty is back and seemingly better than ever, ready to race in front of a home crowd in Birmingham, England.

If Peaty rules the 50 and 100 breast, then who’s at the top in the 200? The answer is Zac Stubblety-Cook. Stubblety-Cook broke the world record in this event at Australian trials this year, swimming a time of 2:05.95 to become the first man under the 2:06-barrier. He already has Olympic and World Championship gold to his name, and now only has to win a Commonwealth title to complete the ultimate trifecta.

Although Adam Peaty’s dominance in breaststroke is more well-defined in the 100 breast, he’s likely to win the 50 handily as well. He has the top Commonwealth time this year at 26.91, but expect him to be much faster—his world record sits at 25.95 and he’s got eight other recorded times that are faster than any other man has ever been.

Peaty lost the 50 breast to Cameron Van Der Burgh in both 2014 and 2018, and looks to claim his first Commonwealth title in the event this year.

The next fastest swimmer behind Peaty this year is Sam Williamson of Australia. At trials, he won the 50 breast in a time of 27.05, becoming the fourth-fastest Australian of all time in the event. Due to Swimming Australia’s selection procedure, he was not named onto the World Championships, meaning that the Commonwealth Games will be his major international debut in the 50 breast.

Grayson Bell was the top Commonwealth finisher at worlds, placing 22nd with a time of 27.91—although he’s been as fast as 27.71 before when he placed third at trials this year. Bell was selected for the Worlds and Commonwealths team by virtue of his second-place finish in the 50 free, and will likely get the opportunity to swim the 50 breast at Commonwealths like he did at Worlds. Jake Packard, who finished in second at trials ahead of Bell and behind Williamson with a time of 27.67, was not named to the Worlds or Commonwealth team because he wasn’t top two in any Olympic events.

2018 bronze medalist James Wilby was Great Britain’s primary breaststroker in the absence of Peaty during worlds, and he now will be competing against him for England at the Commonwealth Games. He finished second to Peaty at British trials in a best time of 27.16 (faster than his bronze-winning time of 27.37 in 2018), and will be a favorite to medal once more this year.

Other athletes to watch out for include Craig Benson of Scotland, who was third at British trials with a time of 27.55; and Michael Houlie of South Africa, the University of Tennessee swimmer who swam a 27.22 at South African nationals to rank fourth amongst Commonwealth swimmers this year.

Benson was not named to the Worlds team but is a veteran of the sport, being a 2016 Olympian and 2018 Commonwealth Games competitor. Houlie on the other hand skipped Worlds in June, so Commonwealths will be his first major long course meet since the Olympics. He has a best time of 26.91 from 2019 and is one of the only men in the field who’s been sub-27 seconds before, so he has a decent shot at medaling as well.

Here we are, previewing the men’s 100 breast—aka Peaty’s pet event. This is the race where he has his eyes on “project immortal”, aka setting a world record that will “stand the test of all time”. The current world record held by Peaty stands at 56.88, a time that already seems unattainable for any other swimmer at the moment. The Commonwealth Games will be his first international meet since announcing project Immortal last December, and we’ll see if he can pull off anything special.

Peaty’s season-best time is a 58.58 from British trials, which is ranked #5 in the world and would have taken silver at World Championships. The only people who have been faster than him this year are Nicolo Martinenghi, Nic Fink, Michael Andrew, and Arno Kamminga, who are all not competing at the Commonwealth Games. So even though Peaty will likely be a lot faster than 58.58, considering that he holds the top 16 times in the history of the event, he can still win 100 breast gold even if he doesn’t drop too much from trials.

James Wilby had a very successful World Championships, taking fourth in the 100 breast with a time of 58.93. In addition, he also helped Great Britain win a bronze medal in the men’s medley relay. With a personal best time of 58.49, Wilby is the only Commonwealth swimmer aside from Peaty who has been sub-59 in the past, and is a likely lock for silver.

Although Zac Stubblety-Cook is more well-known for his strength in the 200 breast, he’s been rapidly improving in the 100 breast as well, and finished seventh at worlds. He also set his best time of 59.51 in the semifinals of that meet. The field in this race is not very deep, with only three men having been under a minute this year, so Stubblety-Cook could get some hardware in an event that he usually does not see that much success in (at least compared to the 200 breast).

A duo to watch for is Joshua Yong and Sam Williamson of Australia, who finished second and third at Australian trials with times of 1:00.04 and 1:00.52 respectively. Yong’s time was a best time, while Williamson has been as fast as 1:00.17 before. Be on the lookout for either of them, as they both have the potential to break a minute for the first time.

In addition, keep an eye on Greg Butler, who finished behind Peaty and Wilby at British trials in a time of 1:00.04. He is tied with Yong as the #4 ranked Commonwealth swimmer this year in the 100 breast. Craig Benson was fourth at British trials, and will be representing Scotland with his season-best time of 1:00.14. He clocked a time of 59.50 back in 2018, and if he can near that this year, he could potentially get on the podium.

While the 50 and 100 breast will be dominated by Peaty, the 200 breast is Zac Stubblety-Cook’s time to shine. After winning Olympic gold and swimming the second-fastest time ever last year, the Aussie took it a step higher and broke the world record at trials this year. His personal best of 2:05.95 is not only the fastest time ever swum, but it’s nearly four seconds faster than what any other Commonwealth swimmer has gone this year.

Stubblety-Cook was a bit slower than his world record time at World Championships, going a 2:07.07. However, it was still fast enough to take gold by over a second. In a Commonwealth field with much less competition, he is an even bigger favorite to win.

Although Stubblety-Cook will likely be the 200 breast winner, his strength lies in his closing speed, meaning he probably won’t be in the lead for the majority of the race. Especially during the first 100 meters, expect to see Matt Wilson and James Wilby being at the front of the pack.

Wilson, Stubblety-Cook’s countrymate, was the former world record holder, setting it with a time of 2:06.67 in the semifinals at the 2019 World Championships. He hasn’t been near that time since, putting up a 2:11.44 to finish 15th at 2022 Worlds and failing to make it out of semifinals. His season-best time is a 2:10.14, which ranks him third amongst Commonwealth swimmers this year. As the 2018 bronze medalist, he looks to make his way back onto the podium once more.

While having to play second fiddle to Peaty in the shorter distances, Wilby rules the 200 breast, having been the top Englishman in the event for the last few years. He is the defending Commonwealth champion, and holds a best time of 2:07.91 which is significantly faster than everyone else in the field aside from Stubblety-Cook. He finished sixth at the Olympics last year and tenth at Worlds this year, where he swam his season-best time of 2:09.85. That time is #2 amongst Commonwealth swimmers, and makes him the favorite for silver this year.

Also keep watch on England’s Greg Butler, Australia’s Joshua Yong, and Singapore’s Maxmillian Wei Ang, who come in with season best times of 2:11.52, 2:11.69, and 2:11.93 respectively and are all in the mix to finish top five.

Will Peaty’s lack of diving practise after broken foot cause him issues in the 50m?

50BRS: Peaty wins; hold a raffle for the other 2 medals

100BRS: Hard to argue to with those podium selections

200BRS: Only interest is whether ZSC will actually take another run at the WR and whether Wilson will agree to play rabbit.

I don’t think we should count out Ross Murdock (Scotland) in the 200.

I assume you mean for top 5 and not for gold?

Yes for top 5. Barring disaster the gold is sewn up.

I don’t think he will be in the mix. Since his win in 2014 he has struggled to regain that shape

I would say his best chance of a medal is in the 100m. He holds a lifetime best comfortable faster than ZSC and swam a 59:5 as recently as GB Olympic trials which if he repeats should put him in the hunt for a bronze behind Peaty and Wilby.