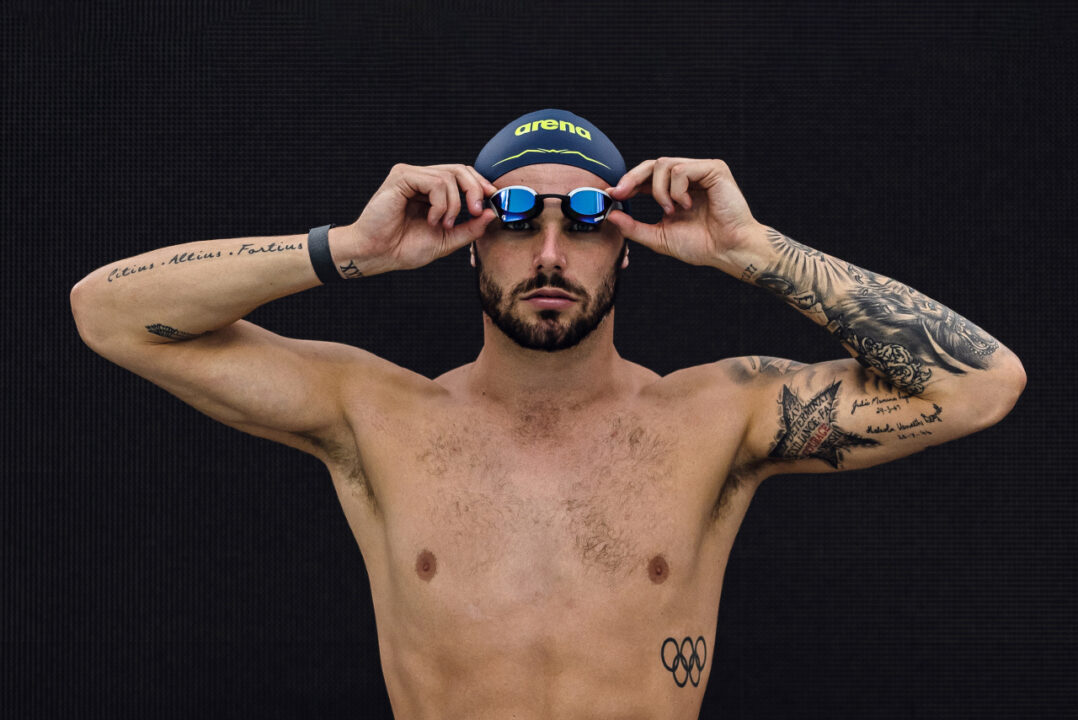 Take a look at who will vie for gold in the men's 50m, 100m and 200m freestyle events at the 2022 Commonwealth Games in Birmingham. Archive photo via arena

While the women’s sprint freestyle events have a clear dominant threat in the nation of Australia, the men’s 50m, 100m and 200m free races aren’t as cut and dry. Yes, there is big-time talent lurking from down under, but England, Wales, Scotland and Canada will each have a major say in what the podiums look like when the heat builds up in Birmingham.

Plus, England and Wales have a distinct home-field advantage, with the newly-built Sandwell Aquatic Centre able to house 4,000 fans ready to cheer their nearby nations’ swimmers all the way to the wall.

Although anything can happen in a race that spans just one lap, England’s Ben Proud appears extra pumped to climb atop the podium for the 3rd Games in a row.

Already this year while competing at the 2022 World Championships in Budapest, Proud took the 50m free title in a time of 21.32, beating out American Michael Andrew’s 21.41 and Frenchman Maxime Grousset’s 21.57. With neither MA nor Grousset competing at these Games, all eyes will be on Proud to repeat his success and take home the gold.

Speaking earlier this summer, Proud said, “Being English, it’s only once every four years you get to race for your country. I’m excited to put all the work I’ve done in the past six, seven, eight years into good use and show that I’ve been able to maintain my career.”

But it’s not a done deal as Canada’s Josh Liendo, as well as English teammates Lewis Burras and Adam Barratt are looking to rain on Proud’s parade.

Liendo fired off a new national record of 21.61 en route to place 5th at the World Championships while Burras placed 7th in 21.83. Burras was faster at the British Championships in April owning a lifetime best of 21.77.

Additionally, there’s a relatively new to the scene in the form of 21-year-old Thomas Nowakowski of Australia. The Griffith business student ripped a huge personal best of 21.86 to take the national title at this year’s Australian Championships. Although he couldn’t muster the same type of performance at Worlds, finishing 25th in 22.45, his capability is now known.

Australia’s Kyle Chalmers narrowly missed out on repeating as individual 100m free Olympic gold medalist, firing off a time of 47.08 to winner Caeleb Dressel’s (USA) 47.02 at the 2020 Olympic Games in Tokyo.

This year, the 24-year-old stuck to just butterfly events at the World Championships giving his shoulder more time to recover from surgery he underwent late last year. As such, the world awaits what the South Australian will throw down in Birmingham with more training under his belt.

At the 2018 edition of the Commonwealth Games, Chalmers wound up placing 2nd, tied with South Africa’s Chad Le Clos in the 100m free. There on the Gold Coast Chalmers topped the 2free podium, but the Marion swimmer has eyes on the 100/200 free double this time around.

Potentially standing in his way could be the aforementioned comeback British ace Burras, the one-time University of South Carolina student-athlete who picked his career back up just last year. In a short amount of time under the tutelage of coach Zoe Baker, with whom he recently moved to Australia for training, Burras got under the 48-second threshold for the first time in his career.

Burras punched a time of 47.63 in the Worlds semi-final to become the fastest British swimmer ever in the event, sealing his spot on both the World Championships and Commonwealth Games rosters for Great Britain and England, respectively.

That was after he already nailed a mark of 47.88 at this year’s British Championships, proving his semi-final result wasn’t a fluke.

Although Le Clos is on the South African roster for these Commonwealth Games, this men’s 100m free was not listed as one of his events by Swimming South Africa. As such, we’ll look to the likes of Canada’s Josh Liendo, England’s young gun Jacob Whittle and more to insert themselves into the medal conversation.

Liendo earned the bronze in this event in Budapest, nailing a strong 47.71 in the final to make his mark. However, the 19-year-old clocked a super speedy 47.55 in the semi-finals of the event, becoming Canada’s 2nd fastest man ever in the process.

Liendo’s personal best holds a slight time advantage over Burras, but we’re giving the latter the edge in the Birmingham final as he’ll have the extra boost of racing in front of a home crowd. Plus, we suspect that Canada was ‘all in’ for the World Championships, holding on for this meet, versus England, which we think had the reverse focus.

The men’s 200m free is one of the most competitive events worldwide and will continue in that vein here at the Commonwealth Games.

Chalmers took the 2free title 4 years ago on the Gold Coast, but he very well may not swim it this time around, as he opted out of the free events at the Australian Trials and at the World Championships.

In his stead, we look to Aussies Elijah Winnington and Mack Horton to carry on the country’s freestyle tradition, with the former recently having placed 8th in the 2free in Budapest. After taking the 400m free crown at Worlds, Winnington settled for last place in the 200m free in a time of 1:45.82. that was after having clocked a mark of 1:45.53 personal best at the Aussie Trials.

Another Aussie to watch is Zac Incerti, the freestyle ace who had COVID-19 issues at Worlds but should be back at his best, ready to build upon his national title-winning mark of 1:45.80.

But reigning Olympic champion Tom Dean is the man to beat with the Englishman owning the top time of the field with a lifetime best of 1:44.22 from Tokyo. In Budapest, he nabbed the bronze in 1:44.98 to put the target on his back for Birmingham.

Assuming Scotland’s Duncan Scott is back near his prime after having to withdraw from the World Championships due to COVID-19 complications, the Stirling man is also a top contender for gold. Scott owns a lifetime best of 1:44.26 from winning silver in Tokyo.

I think you’ll find Duncan Scott is swimming for… Scotland. So no English 1-2 in the 200. Unless James Guy…

The predictions look about right to me. But I think in the 200FS Winnington is a better bet for the bronze than Incerti. And by the way, his 1.45.53 PB was done in the semi-finals at the WC’s, not at the Australian trials.

Can you do the fly events please

The Canadians will be televising it, access that way?

VPN to Canada and CBC.ca

none, but VPN and CBC is your friend

Duncan Scott fuming that he’s referred to as part of a 1-2 English punch, he thought the name would be enough to avoid confusion.

Sturgeon has summoned Mel to Edinburgh to explain himself

England will win all the Men’s freestyle races from 50-200m – easy work!

50 & 200 look to be “locks”. If Chalmers is “on”, he should win otherwise Liendo-Edwards or Burras may be in business.

Chalmers showed he was on in the Budapest

Great relay swims aren’t always the perfect indicator that a great individual swim will follow though I will certainly grant you that Chalmers 2019 Worlds plus Tokyo played out that way.

You’re very right ! I was thinking GBR and overlooked the split up. It will be Dean (ENG) v Scott (SCO) for 200 gold; would not surprise to see an all British podium.

IF he swims the 100; he could certainly be a major factor but will he ?

Not if he is training to swim the 400IM.

The Aussies said that in Gold Coast and look what happened

Duncan Scott did not train for the 400IM in the Gold Coast.

I’m with Rob on this one. If he’s seriously pursuing the 400IM then 100FR (other than being part of 4X100) isn’t really happening … as regards him being a major factor.

No 400IM …. that’s another matter entirely

This meet will come down to one event, Chalmers vs. Simpson in the 100 fly. They should let Emma announce the race

Matt Temple will beat them both

I’m not so sure about that. Temple looked off going into WCs and still was only .19 behind Liendo in the final. Could definitely go either way.