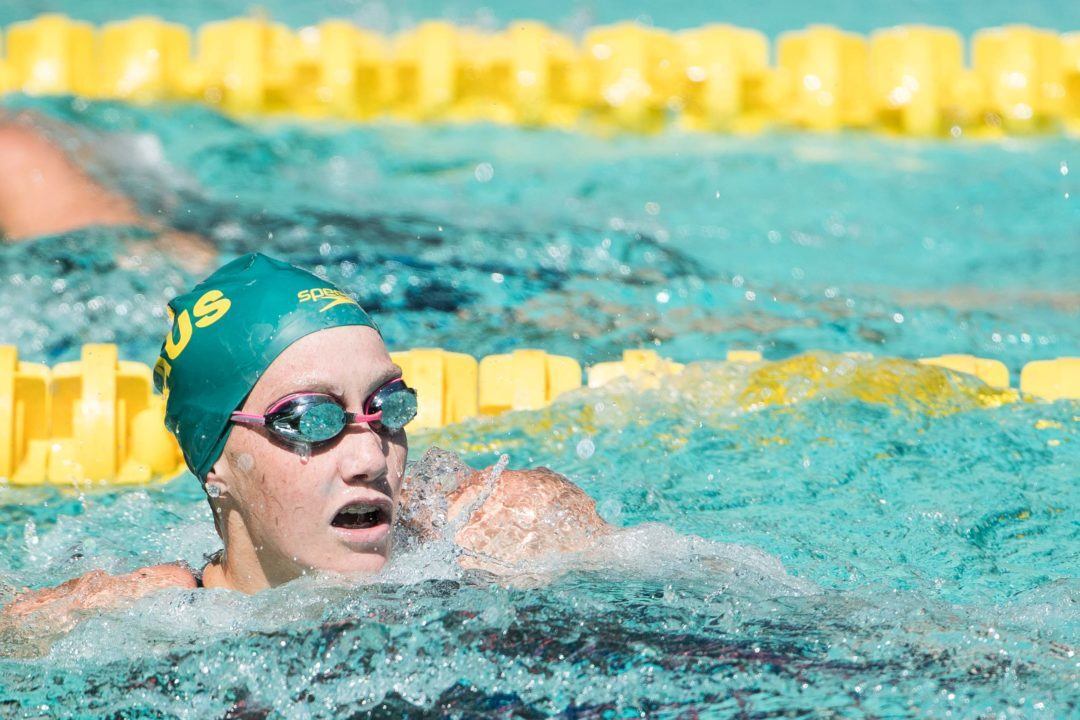 Without Emma McKeon, Cate Campbell, or Bronte Campbell, your guess is as good as ours for who will qualify for the 100 freestyle. Archive photo via Mike Lewis/Ola Vista Photography

Australian singer-turned-swimmer Cody Simpson equaled the qualifying time of 51.96 in the 100-meter butterfly finals on Wednesday.

The 2022 Australian Swimming Championships are right around the corner and we’re keeping track of the top storylines heading into the meet. One such storyline is the women’s sprint freestyle turnover. With many of Australia’s top swimmers taking the summer off, a number of spots have opened up for 100 freestyle at World Championships this summer.

The Australian women won gold in the 4×100 freestyle at the Tokyo 2020 Games and 3 of the 4 women who swam if the final for the country won’t be racing at this year’s Trials. Legendary sisters Cate Campbell and Bronte Campbell, along with 11-time Olympic medalist Emma McKeon are not among those entered in the event.

Emma McKeon and Cate Campbell were also Australia’s representatives in both the 50 and 100 freestyles. McKeon took gold in both of the sprints at the Olympics, while Campbell took bronze in the 100. Without 3 of their top sprinters, this meet will give the rest of the field a shot at breaking through.

In addition to the Campbells and McKeon, Meg Harris, Mollie O’Callaghan, and Madi Wilson raced for Australia on the 4×100 freestyle relay last summer. Harris raced in the final and split a 53.09, while O’Callaghan (53.08) and Wilson (53.10) swam only during prelims.

Both Wilson and Harris dipped under 53 seconds during the ultra-fast 100 freestyle final at the Tokyo Trials last year. Wilson hit a 52.76 for 3rd overall, while Harris hit a 53.92 for 4th. O’Callaghan was a 53.25 for 6th place to earn a spot on the team.

Each with a PB between 52.76 and 53.08, the trio of relay swimmers who have entered to race this event in Adelaide will be among the favorites to get within the top 6 and they’ll all be gunning for an individual swim in Budapest this summer.

The Return of the Jack

Jack also picked up medals at the 2018 Commonwealth Games, the 2013 and 2015 World Junior Swimming Championships, and the 2018 Pac Pacific Championships.

She qualified to race for Australia at the 2019 World Championships, but right before the meet began she tested positive for Ligandrol, a banned substance. She wound up getting banned from the sport for 24 months from July 2019 – July 2021, meaning that 2022 Worlds is the first major long course meet she’s been eligible for.

Jack showed that she’s ready to race this summer when she threw down a 53.13 100 freestyle to win the event at the New South Wales State Open Championships in March. That swim was among the quickest in the world this year and makes her the 4th seed at Australian Championships.

Jack will be one to watch in both the 50 and 100 freestyle, considering her in-season speed and past consistency racing at the top level of Australian sprinting.

The top 4 entrants seem pretty locked in here considering that only Wilson, Harris, O’Callaghan, and Jack have entered with a sub-54 time. That doesn’t mean, however, that there isn’t potential for someone else to make a move and challenge for a spot on the team.

While she’s not racing at the World Championships, she is expected to race at the Commonwealth Games and might be attempting to nab a spot on the 4×100 freestyle.

Brianna Throssell (54.27) and Leah Neale (54.32) both have Olympic, World Championship, and Commonwealth Games medals to their names, having both raced the 4×200 freestyle in Tokyo. While Neale hasn’t been as focused on the sprints at international meets, Throssell raced butterfly in the women’s and mixed 4×100 medley relays in Tokyo and also made the final in the 200 butterfly.

Both of them will have a shot here at capitalizing on the top-end absences and potentially get themselves onto the 4×100 freestyle relay, or event the event individually, in addition to the other events they contest. Throssell is also entered to race the 100 butterfly, 200 butterfly, and the 200 freestyle, while Neale is entered in the 200 and 400 freestyles.

We recently outlined some of the most promising up-and-coming Australian swimmers in our “Young Guns to Watch” post. Among those highlighted was 15-year-old, Milla Jansen. Jansen recently swam her first-ever sub-55 100 freestyle when she 54.94 in April to improve upon her 55.05 PB from the month before.

Jansen has seen significant improvement this year, having begun the season with a 56.73 from April 2021. At Australian Olympic Trials last year she finished 42nd overall with a 57.33. Now that she has reached the 54-second barrier she’s showing signs of momentum that could allow her to produce a World Championships-qualifying swim.

And the Tokyo heat relay would still have won gold by over a second. If Mollie, Meg and Madi can reproduce their Tokyo heat times and Jack can produce at least a 53.5 flying start (.4 slower than her flat start) they should still win.

if I remember correctly I think Mollie also split 52.3 on the medley relay

Yes that’s true. Probably suggests that she could go faster than a 53.08 flat.

She was absolutely on fire at age.

I was thinking that as well but it might be better for her to get a bunch of swims at Junior Pan Pacs than a single relay prelim at Worlds. At JPPs she’d probably get 3 individuals and 5(?) relays.

That’s for another day. We don’t wanna scare off the world just yet.
The Casey, Wunsch and CZAJKO show, will be for a later date.

Be interesting to see how she goes this week.

Bring on the trials!

Last year’s Amazon Prime coverage was pretty great and I’m happy to pay up this year rather than see it via a free month’s trial.

As a HUGE Nicole fan, on watching the Tokyo replays, she was not on fire at the Olympics….

Her British sidekick was atrocious.

From her accent you would think that she is British

Her accent definitely sounds Australian to me. It’s just not a strong working class accent.

Honestly wouldn’t be surprised to still see 2-3 girls under 53.

Yes, especially with the 49-meter Australian pool in use.

The smell gets bigger.

Just the vegemite sandwich you left out on your kitchen counter.

Same fear we seen prior to Tokyo………..

Was the pool in Tokyo also 49m but passed off as 50 due to bribes to FINA & IOC by those dastardly cheating Aussies ??

No, if that were the case, AUS would have finished higher in the medal totals.

We are so laid back here in Adelaide…they just made the pool about 50m long….

Close enough is good enough….she’ll be right mate
Oh to have such depth in our swimming ranks.

I think you’ll get your wish

Hopefully Shayna Jack is not one of them #cleansport

Wishful thinking after her going 53.1 in March

In 2019 she didn’t improve from “in season” to trials so it’s possible.

Oddly enough, I agree with you. Whilst I think her offence was one of carelessness rather than outright malfeasance (which in itself is only a mitigating factor rather than a defense); having her earn one of the 2 individual swims at Worlds is likely to prove a distraction/media sideshow that the team could do without.

As to whether she can/will go sub53 flat-start is open to speculation as, so far, her 100 time is currently a case of returning to the level she was a prior to suspension rather than finding another level.

I agree tbh. She’ll definitely be on the relay but I would prefer if she didn’t get an individual just to save the distraction (and the inevitable constant whining in the SS comments if she actually medals)

I disagree .. if Jack races the other girls and beats them that just raises the bar .. she can’t control the other girls but knowing their PBs if they don’t swim fast enough to beat Jack then that says a lot more about the current depth than some drug issue

Fair points and if she does so then unless she declines she swims the events. Whilst I’d be surprised if she performs exponentially faster than she has to date, it cannot be ruled out.

My point, however, is that her presence as a returnee post suspension is likely to attract the brand of attention that can easily evolve into a media circus and distraction that the team could do without. The reality is that many (admittedly not all) such returnees have NOT been able to handle the unwanted limelight with their performances reflecting such.

Therefore, my preference would be that others, in particularly the next generation of O’Callaghan/Harris get the individual berths for Worlds and if Jack makes the team… Read more »

Yes, even if she misses an individual 100 spot she’s basically a shoe in for the 50.

Well she might as well be charged with paedophilia if that’s the Aussie mindset about people doing the crime doing the time .. I don’t think the public have a high opinion of swimmers to turn it all into a circus unless you’re a big swim fan

My guess is that she wants to prove herself and is hungry.