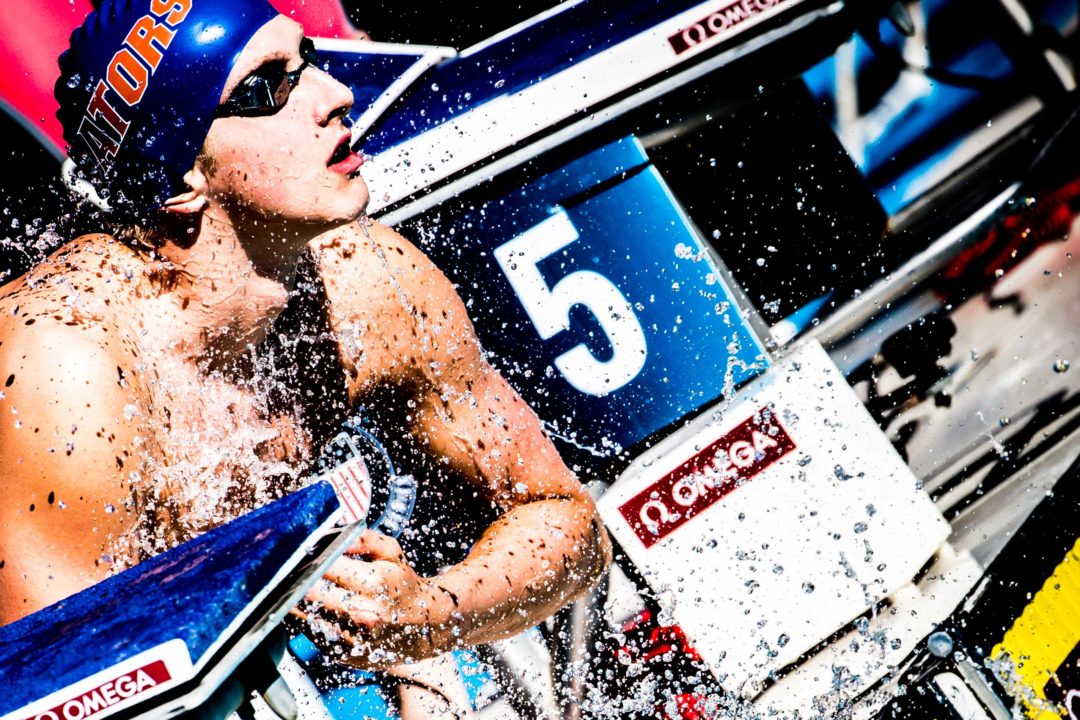 Georgia is having a ridiculously impressive season, though, and a very strong A&M team could also make things interesting at the 2021 SEC Champs. Archive photo via Jack Spitser/Spitser Photography

It’s been eight straight seasons with the Florida men on top, and they look pretty good to extend their SEC conference win streak to nine this year, with a ridiculous top-end talent pool including American record-holders Kieran Smith and Robert Finke. Georgia is having one of the program’s best seasons ever, though, and Texas A&M continues to develop around Shaine Casas— both teams could make things interesting with the Gators for the SEC title.

One notable difference about the SEC Championships in 2021 is a split-gender meet, so the women’s programs are racing this week at the University of Georgia, as well as the men’s and women’s divers this week at Mizzou. The men’s swimming portion will be the final leg of the fragmented meet due to COVID-19 and capacity limitations.

Florida – Kieran Smith (junior everything), Robert Finke (junior freestyler/IMer), Eric Friese (sophomore sprint free/fly), Dillon Hillis (junior breaststroker), Will Davis (junior sprint free/fly), Trey Freeman (RS sophomore freestyler), Clark Beach (senior backstroker) – Smith can A-final in every event at this meet beside the breaststroke events. No, really. Look up his best times. Florida has quite a cast: American record-holders Smith and Finke, a stable of sprint freestylers/butterfliers, one of the best breaststrokers in the conference in Hillis and the return of Trey Freeman.

Georgia – Camden Murphy (senior butterflier), Ian Grum (sophomore back/IMer), Javier Acevedo (senior everything), Luca Urlando (freshman everything), Jake Magahey (freshman freestyler), Andrew Abruzzo (junior free/IMer), Grant Norgan (senior freestyler)  – The Georgia men have looked great this year, and their sprint group has already torched program records this year in relays. Murphy has blown by the 45-second barrier in the 100 fly, while Urlando and Magahey are primo freshman additions. Acevedo being back is a game-changer for their title hopes.

LSU – Brooks Curry (sophomore sprinter), Juan Celaya Hernandez (senior diver) – Curry broke out last season for the 100 free SEC title, and he’s one of the best sprinters in the country. Meanwhile, Celaya Hernandez could be a huge diving threat, and he holds the SEC meet record in the 1-meter event from 2018. Apart from those two, there aren’t immediately many scoring options, though freshman Mitch Mason has gone a lifetime best 53.69 in the 100 breast already this season.

Missouri – Danny Kovac (junior everything), Ben Patton (sophomore everything), Jack Dahlgren (junior freestyle/backstroker), Daniel Wilson (freshman sprint freestyler) – Kovac is knocking on a 44-second 100 fly, and Patton has dropped huge time to become a 51-second 100 breaststroker this year. Wilson, the freshman, has broken out with a 42.8 in the 100 free already this year. The roster has many versatile sprinters, and that’s a fun puzzle for the Tiger coaching staff to plug-in and try to maximize scoring at the conference championships.

South Carolina – AJ Ross (senior sprinter), Phil Costin (junior sprinter) – Lewis Burras, a UVA transfer, was 19.1/42.2 in the 50/100 free at 2020 SECs, but he’s not on the SEC psych sheets after racing only once this season (in October). Costin returns after making the 200 free A-final at this meet last year.

Did anyone see Kieran Smith‘s 4:06 coming at this meet last year? We don’t blame you — he only swam the 500 free once during his freshman year, and didn’t race any individual freestyle events at SECs or NCAAs that year. During his sophomore year, he raced the 500 only twice before the 2020 SEC Championships: a 4:27.8 in September and then a more convincing 4:18.1 in February, less than three weeks out of SECs.

Smith might be the heavy favorite, but there are two guys knocking on that 4:10 barrier who *could* make it interesting. The first is Jake Magahey, a freshman at Georgia, who went 4:10.48 at the Georgia Invite in the fall. Magahey has already dropped two seconds from his pre-college best, and he’s part of a Georgia team that has a ton of momentum right now.

The other 4:10 this year is Mark Theall, a senior at Texas A&M. Since transferring from UNLV, he’s gone from 4:54 (a high school best) to 4:10.67 from the Art Adamson Invite in the fall. Magahey and Theall are 1-2 in the conference right now ahead of Smith, but they’ll need the race of their lives to make things interesting with Smith; of course, it was only about a year ago that Smith had his own ‘race of a lifetime’ to set the American record in this race (4:06.32).

Something else to consider: Smith is entered in nine events (both fly, both back, both IM and 200/500 free) at this meet, while Magahey’s entered in all five freestyle events and Theall in all free events but the 50. Magahey and Theall will probably do the 500, which would be a great battle in and of itself, but Smith might opt for the 200 IM that day of the meet.

We’ll probably see the same players here as in the 500 free (pending Smith’s event decisions), though Smith’s biggest challenger might be LSU sophomore Brooks Curry. Smith was a show-stealer at this meet last year, but Curry had a breakout year to be remembered, and actually beat Smith head-to-head in the 100 free on the last day of the championships.

Smith’s best time is a 1:30.11, from the 2020 SEC Championships 800 free relay, fresh. Still, Smith could be as fast, if not faster than that, even after his first two days of racing. Curry and Theall were both 1:32.4 last season, and they’ll be the primary chasers.

Don’t forget about Florida sophomore Trey Freeman, who took a redshirt last year due to an injury. Freeman has looked great in his comeback season, and his 1:34.00 has him seventh in the conference this season.

In addition to the freestyles, the Georgia men look extremely strong in the butterfly events this season. Pair the defending 200 fly champion, Camden Murphy, with one of the most impressive high school recruits in history, Luca Urlando, and you’re bound to see something special. Murphy leads the entire nation this year in the 100 fly with his school record 44.89 from the mid-season invite, while Urlando sits fifth (45.10).

Sandwiched in between is Mizzou’s Danny Kovac, who went 45.07 mid-season, and is the defending champion. This race could be even more exciting if A&M’s Shaine Casas chooses to race it– he has only done the backstrokes and 200 IM at the last two SEC Championships, though at 2019 NCAAs, as a freshman, he did both butterfly events and the 200 IM. Casas is entered in both backstrokes, both IMs and both butterfly races for this meet, so we’ll have to wait till final entries are announced to see if he swims this.

With or without Casas, though, this race could see at least three men under 45 in the final, and don’t count out Tennessee senior Kayky Mota. The Brazilian national has been 45.50 this year, a lifetime best, and he’s the only other SEC man under 46.

Side note: if Casas races the 200 fly, that will also mean at least three men are likely to break 1:40, and that should be an exceptional race, too.

Regardless of Smith’s presence in this race, Alabama star freshman Matthew King is surely capable of the SEC title here. After one semester in Tuscaloosa, he’s already brought his lifetime best in this event down from 43.2 to 42.1, way ahead of Curry’s 44-mid in high school to 43.3 pre-SECs trajectory when he was a freshman.

And lastly, though he’s down in the 13-seed at 43.22, Florida freshman Adam Chaney certainly seems capable of a big swim.

Aside from the big-time boosts from butterfliers Urlando and Murphy, having sprinter Javier Acevedo back is key. Acevedo was 41-high and 18-high on their school record-breaking and nation-leading free relays mid-season, and going along with their freshmen and Downing, they look incredible right now.

Defending champions Alabama might not be quite as strong as last year, but they more or less replace the outgoing Waddell with King, which is huge for them. Florida is going to be in the mix, and we know Chaney is a huge relay swimmer, while Casas and Theall, along with an on-fire Tanner Olson, should keep the Aggies in contention, too.

The Swimulator was very high on Georgia last year, too, projecting them to win with 1125 points, with A&M and Tennessee close behind. They also said Florida would be fourth at just 749 points. The Swimulator doesn’t factor in diving, and the analysis simply takes into account best times this season.

Last year, Florida hit 1194 points to win, well ahead of A&M (975) and Georgia (953.5), with Alabama a close fourth (935.5). Florida effectively out-performed the Swimulator by around 450 points, while Georgia finished roughly 175 points below projections.

Of course, the spread this year is extremely positive for Georgia, and for good reason — they are incredibly strong this season. If you do the same +/- this season as the Swimulator did last year, you’d get Florida at 1,395 and Georgia at 1,138.5, but it feels like it’ll be somewhere in the middle for both teams.

While it might get close, coming down to events on day four, we’ll still take the Gators on top for number nine.

Notably, we have another fantastic Texas A&M team this season, led by Casas and a growing supporting cast. Stars like Smith, Finke, Casas and Curry should dominate the week, but this is shaping up to be another electric meet, with Alabama, Tennessee and Mizzou also looking very strong. After the performance by the Alabama women, though they didn’t have the depth to seriously challenge for the title, it’s easy to have confidence in the Alabama men.

Down the ladder, Kentucky has two phenomenal divers, but Auburn’s diving group is decent in its own right, and their freshmen are looking solid — ultimately, there are more swimming events (and relays) than diving. Meanwhile, Curry, and a strong diving group, can only push LSU so far.

I think Georgia will come in really hungry and ready to win a championship. A hungry dog always runs faster and I think this is the year that UFs run comes to an end. My prediction is UGA in a nail-biter that goes down to the last day with the 100 fly or 100 free being the race of the meet.

Why is Kentucky so down in men´s side compared to women, have pushed all chips on women or what?

Lots of good freestylers. They’re going to have to swim fast in the morning so they don’t get left out of the finals.

1
0
Reply
Outside Smoke
Reply to  Marklewis

42 low is a bit ambitious for that morning on the last day of the meet don’t you think? I agree with the idea that they need to be ready to go in the AM but maybe not that ready.

Lopsided championship win for the Gators