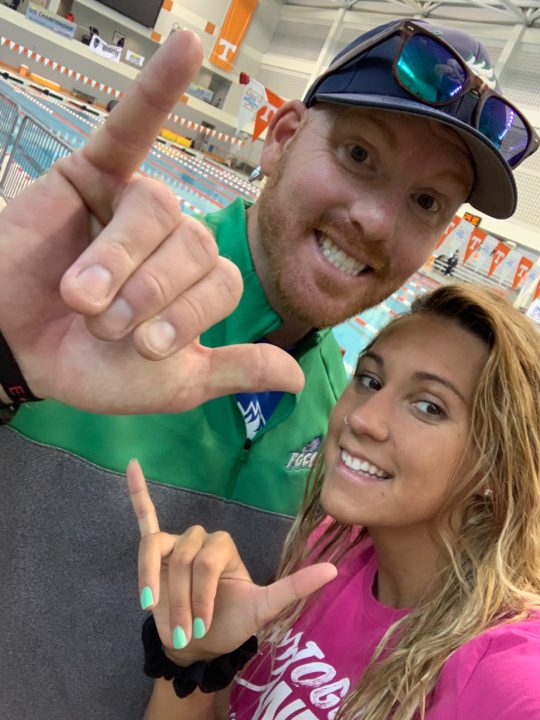 That knocked over 4 seconds off the FGCU school record, CCSA Championship Record, and CCSA Conference Record of 2:11.51 that was set by Katie Armitage in 2016 Current photo via Dave Rollins

The 2020 CCSA Championships concluded tonight in Knoxville, Tennessee. The Libery women earned back-to-back titles as they defeated rival FGCU by over 150 points. Incarnate Word extended their streak of men’s victories to 3-straight.

After tying the conference record in the 100 breaststroke on Friday, Florida Gulf Coast junior Petra Halmai crushed the conference mark in the 200 breaststroke, swimming a 2:07.38. That knocked more than 4 seconds off the FGCU school record, CCSA Championship Record, and CCSA Conference Record of 2:11.51 that was set by Katie Armitage in 2016.

“I am so happy,” Halmai said of her record-breaking performance. “Knowing that all the hard work and time that (head coach) Dave (Rollins), (assistant coach) Lara (Jackson), Erik (Krause, strength coach), and Taylor (Carpenter, athletic trainer) and I have put in has paid off. The support from all of my teammates has made this moment so very special and I cannot wait to represent FGCU at NCAAs!”

“Petra is a truly special young woman,” FGCU head coach Dave Rollins said of his star pupil. “She could have gone to college anywhere. But to have her trust and belief in what we are doing here at FGCU means everything. She raises the team up with her personality, love and has an insane work ethic. This was a goal of hers (to make NCAAs) from day one and to see that come to fruition, with all her teammates watching, cheering, and swimming along, is a special moment for her, our program, and our university.”

After years as regular participants at the NCAA Championships, FGCU was absent from nationals last year for the first time since 2013.

Halmai’s time also ranks her as the 4th-fastest mid-major 200 breaststroker in history, behind only:

Halmai’s swim is the 8th-fastest nationally this season through the conclusion of Saturday’s competition and one of the 50 best collegiate times in history.

Halmai wasn’t to only swimmer to demolish a record tonight. Liberty junior Payton Keiner took nearly a full second off her own record in the 200 back. She had set the CCSA Record with a 1:53.29 at the 2018 Liberty Last Chance Meet. Tonight, she broke 1:53 for the first time to defend as champion in 1:52.63. That should safely qualify her for NCAAs in the event. Liberty swept the podium in that event, with Emma Hazel (1:56.53) taking silver and freshman Eva Suggs (1:56.75) taking bronze.

Teammate Leonardo Sanchez won a close battle in the 100 free. Sanchez, who placed 5th in this event last year, dropped a second from his best to win it in 44.23. He got his hand to the wall first as he outpaced Gardner-Webb’s Zach Dingfield (44.41) on the back half. UIW won every men’s event on the final day. Oleksandr Karpenko completed his sweep of the breaststrokes as he won the 200 breast in 1:56.86.

Liberty’s Mikayla Herich stayed perfect in her individual events as she won the mile on day 4. Herich, who swept the IM titles here, won the title in 16:38.96. That’s her 2nd fastest time ever, behind her 16:37.35 from last season’s CCSA meet. She now owns back-to-back title in the event. Incarnate Word freshman Ximena Conde, the 500 free champion, took silver in 16:46.22 as she slightly outpaced teammate Brenda Diaz Martinez (16:47.00).